Caesars Palace in Las Vegas is currently owned by Vici Properties, but that hasn't always been the case. In fact, the legal ownership of the resort has changed several times since 1966.

Here’s the list including every owner of Caesars Palace hotel and casino resort since its inauguration:

Below is the full history of one of the most prolific Las Vegas resorts of all time.

Having started off as a hotel, Caesars Palace has quickly grown into a full gambling resort. Just a few years after its grand opening, it has become a major hub of entertainment in Paradise.

It remains just as impressive today, even though numerous other resorts of a similar scale have risen around it. Nevertheless, Caesars Palace will always remain the first explicitly themed resort with a unique style in Vegas. 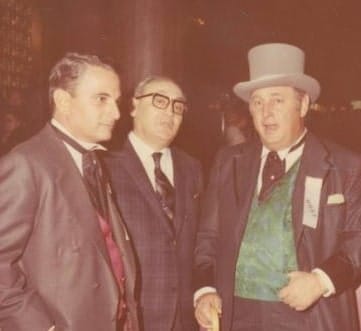 Everything started in 1962 with Stanley Mallin and Jay Sarno. They took a loan of over $10 million for the construction of a new hotel.

Sarno had an idea of a Roman Empire themed establishment and was the lead designer of this style. This included everything from classical architecture to the outfits of the casino staff.

The construction was successfully complete and the hotel opened in 1966. It quickly attracted visitors, performers and new investors around the area.

Two years later, in 1968, the first casino called Circus Circus was opened at Caesars Palace. It was a luxurious venue, just as the hotel itself. Thus, it became a major destination for professional gamblers and celebrities.

Sarno, Mallin and other investors sold the casino to Stuart and Clifford S. Perlman in 1969. They purchased the property for $60 million and continued operating it. The hotel grounds were also expanded in the same year.

Soon afterwards, The Perlmans changed the previous name of their company to Caesars World. The same company owned the resort for over 30 years. The Perlmans, however, sold their shares of Caesars World after a fire incident at the hotel in 1981.

The Forum Shops at Caesars Palace is one of the most successful shopping malls in the entire US. It was during the Caesars World era that it was established, in 1992, to be precise. The 677,138 sq. ft. venue remains a huge attraction to this day.

In 1999, Park Place Entertainment acquired Caesars World for $30 billion. Hence, the ownership of Caesars Palace (and of several other resorts) shifted as well.

Again, this company changed its name too to use the renown of Caesars Palace to their advantage. Thus, it became known as Caesar’s Entertainment, Inc. in 2003.

They didn’t keep this grand resort for long but they still managed to improve it. The main changes they’ve made was:

Quickly after that, the ownership of the famous Vegas resort changed again. This time, Harrah’s Entertainment acquired the previously mentioned company for $10.4 billion.

In 2010, however, they changed their name into Caesars Entertainment Corporation for the same reason as the previous owners.

Today, the same group owns Caesars Palace, along with around 50 other Vegas casinos. Many of them are situated on the Strip.

In recent years, Caesars Entertainment reorganized itself from within. Thus, several new daughter enterprises were created. Vici Properties, a real estate investment trust, was one of them.

The ownership of more than 20 resorts and casinos were then transferred to Vici Properties. Caesars Palace is no exception as it’s owned by this subsidiary and leased to Caesars Entertainment today.

The Caesars Entertainment Corporation is one of the largest casino owners and gaming companies in the world. Its current CEO is Mark P. Frissora and the company’s ownership is shared by many investors.

The largest of these investors are:

Last renovated in 2015, Caesars Palace remains a top attraction in Nevada. It has massive grounds with every form of entertainment you can think of.

While the hotel and the casino are at the centre of attention here, there are many other things to do in this resort. The attractions include:

Here’s a little about each of these major attractions and services.

The Caesars Palace hotel has almost 4,000 rooms, suites and even villas available to its visitors. You may choose from modest but excellent apartments to luxurious mansions that emperors could be jealous of.

As with everything else in this resort, the rooms and public areas have a classic art style. Be it elements from ancient Roman, Greek or Renaissance art, you’ll remember a single night there for years.

Of course, it isn’t just the luxurious style and shiny looks. The rooms have all the amenities you’d ever need and the customer service is top-notch. The hotel has earned a seal of excellence on TripAdvisor and definitely deserves it.

Caesars Palace casino is even more breathtaking. It has a gaming space of 124,181 sq. ft., with thousands of games and other gambling options.

There are hundreds of slot machines in the casino, situated in an extravagant hall of the Antique design. The visitors there can gamble from 1c to $500 per spin. The games include classic slots, jackpots, video poker, video blackjack and keno, among others.

There’s also a sports betting area with comfortable seats and huge LED screens all around. Gamblers there bet on races, football and various other sports.

The table game area is one of the most impressive and elite gambling areas on the Strip. The casino accommodates games like roulette, craps, pai gow poker and tiles, poker and blackjack variations.

The Forum Shops at Caesars Palace

The Forum Shops at Caesars is the main shopping centre at this resort and in the whole of Las Vegas, actually. It’s 677,138 sq. ft. in size and has over 160 stores.

Many designer stores are located there as well as high-end perfume outlets and other unique establishments. Among those, many popular and affordable brands and retail chains are available to everyone.

Finally, visitors go to the Forum Shops to eat as well. A number of restaurants and coffee houses dot the mall. Its crowning jewel, however, is the 50,000-gallon aquarium themed after Atlantis.

The Colosseum at Caesars Palace

The Colosseum is the most expensive entertainment venue in Las Vegas. Those who stay at Caesars Palace go there to watch various concerts, shows and performances.

Inspired by the Ancient Roman Colosseum in architecture, it can seat 4,300 people. Among the performers in the venue, you’d find many world-known artists like:

Other Establishments at Caesars Palace

Caesars Place is most famous for the attractions above but there’s much more to explore there. From the world’s best restaurants to divine pools, everyone will find something they’ll enjoy.

“In fact, you wouldn’t be able to check out everything at Caesars Palace even if you wanted to.”

Speaking of various restaurants alone, the visitor may choose from quick buffets to world-class dining houses. The visitors seem to enjoy eating in:

There are many pool areas to choose from too. The options include private pools with dedicated waiting services as well as exquisite pools for large companies.

Caesars Palace won’t let down sports fans either. There are loads of pubs with large TVs broadcasting football matches and other sports.

If you want some more action, the resort is very close to Las Vegas’ golf courses like Cascata and Rio Secco Golf Club. There’s also a gym for those who want to stay active while enjoying the life of a Caesar.

“All these venues and services may seem like a lot but we have barely scratched the surface of Caesars Palace.”

The amount of activities is awe-inspiring. What’s more, everything we mentioned seems taken straight out from the past. With the exception of the quality, that is, which exceeds most other resorts in the world today.

Tl;DR – Caesars Palace has been owned by many different people in the past. However, it’s been growing and improving with each year.