Mobile Casino » Questions » What is the Capacity of the Colosseum at Caesars Palace?

What is the Capacity of the Colosseum at Caesars Palace?

The Colosseum’s seating capacity is 4,300. It may not be the largest venue ever, but it’s one of the best venues in Vegas.

The shows there are in high demand, though. This means that despite a spacious interior, you should always book your seat in advance. Otherwise, there’s little chance you’re getting in.

It’s the fabulous Las Vegas, after all, so tourists go there all year round. Plus, the Colosseum is a major attraction even when compared to other venues on the Strip.

Inside the Colosseum at Caesars Palace

While it looks like a real Colosseum on the outside, its interior is luxurious in a different way. For one thing, it’s not an open-air venue.

Instead, you’ll find a rich atmosphere and extremely convenient arrangement. A splendid red design dominates the concert hall while other areas have a bright golden architecture.

Like everything in Caesars Palace resort, the Colosseum is full of Ancient Roman and Renaissance-like art.

Here are some details you’ll find useful if you’re thinking of visiting the Colosseum in Las Vegas:

Guests are expected to act responsibly and not to disturb other visitors during the performances. Otherwise, everyone is welcome to visit and will be assisted with care by the staff.

Areas on the Colosseum

The circular concert hall is located in the centre of the building. Bars, lounges, merchandise stands and other services are located in the main lobby. It circles around the venue itself, surrounding it on all sides.

The box office is located just outside the entrance, though. So, you’ll need to get your tickets before you can enter the Colosseum interior at all.

The hall itself has the stage at the far end from the entrances. The seats are arranged in a semi-circle, ensuring a straight view directly into the stage.

There are two mezzanines above the first floor, which are also filled with seats. Usually, no standing area is available, so all visitors have to buy seat tickets instead.

The balconies are accessible via staircases in the outer circle of the Colosseum. There’s no way to get up or down once you’re in the hall itself.

Events and Performers at the Colosseum

The Colosseum hosts all sorts of events. Music shows and stand-up comedies are among the most frequent ones. However, there are all sorts of other performances and events that you’ll find there.

Main Performers in the Colosseum 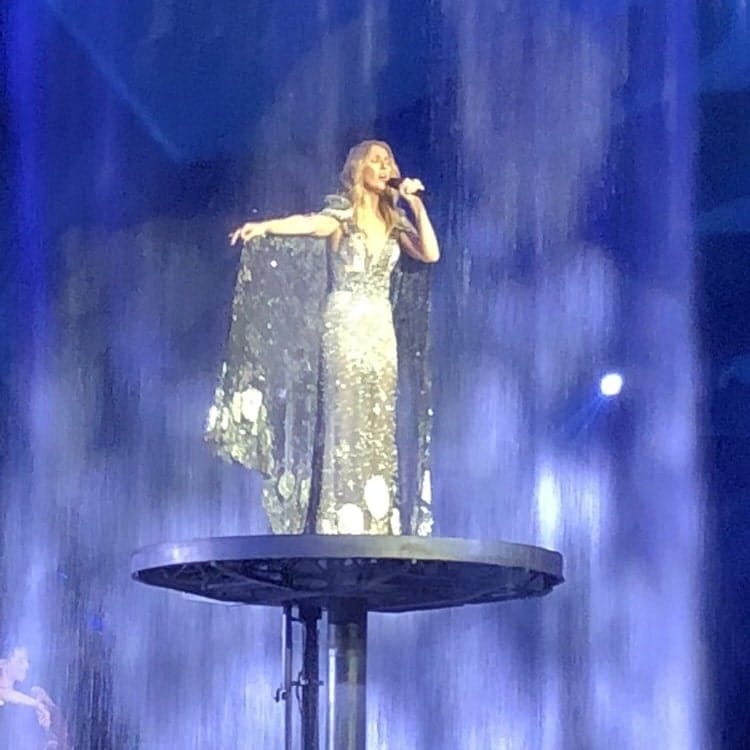 There have been a number of regular performers in the venue during its history. Some have been participating there since the very beginning in 2003.

The venue has been gaining renown thanks to many world-class celebrities and artists such as:

The most notable of them is Celine Dion, who has been regularly performing at the Colosseum since its opening. She has performed more than 1,100 times in this venue as of today!

The ticket prices to various performances vary, of course. However, the average price range is between $50 and $250 on most performances, depending on the seating position.

The Colosseum is part of Caesars Palace hotel and casino resort on the Las Vegas Strip. Thus, it is surrounded by tourists, shops, restaurants and entertainment.

Besides, everything in Caesars’ is in Ancient Roman and Greek style. Hence, the Colosseum fits perfectly into its surroundings and is an indispensable part of the resort.

Getting to the Colosseum

If you’re staying outside of the Strip, you can easily get there by taxi, bus, monorail or another public transport service. There’s also an underground parking garage just outside the Colosseum.

If you live on the Strip or in Caesars Palace hotel, though, you can easily get there on foot. Here's a map of the resort's grounds.

Caesars Palace is located at the central part of the Strip on its west side. It neighbours many popular attractions like the Fountains of Bellagio, The Mirage, The Venetian and Flamingo Las Vegas.

Attractions Near the Colosseum

There’s no better opportunity to explore Las Vegas if you’re already attending an event at the Colosseum. Its superior location in the centre of the action on the Strip makes it a perfect starting point.

The nearest locations you should consider visiting are:

There are countless places to stay in around the Colosseum. The closest one is, obviously, Caesars Palace hotel. There, you’ll find many kinds of rooms and suites to choose from.

The extraordinary luxury, cleanliness and hotel service don’t make this hotel a budget option, though. You may have to pay at least $150 a night and more if you’re booking on short notice.

There’s something going on at the Colosseum every single night. Hence, thousands of tourists and visitors flock in every day without a break.

It may not be the most impressive or the largest venue around. However, it certainly leaves an impression.

That said, it isn’t without a few drawbacks. So, here’s a short list of the best and the worst of the Colosseum at Caesars Palace:

According to 9 out of 10 guests, the Colosseum is certainly worth a visit.