For some among us, Western movies are the best genres in film history. Whether you prefer to the old classics from the 60s or the modern Western blockbusters, there is something about the Wild West, its rugged cowboys and those gunfire scenes that never fail to thrill. Some even argue that these movies have shaped society’s idea of American masculinity.

NetEnt rides this mainstream wave with its newest game titled, Wild Wild West: The Great Train Heist. The game has put together all of the necessary elements—steely men, badass women and pistols—and delivered quite a cinematic gaming experience.

You could walk away like a gun-slinging hero yourself, by scoring the game’s loot of 500 times your wager. After all, it’s a Wild West game. There’s plenty of Wild symbols to facilitate you on your fortune-hunting mission!

The slot has chosen to stick to the classics. The game setup is really simple, with only 5 reels and 10 paylines. These are fixed paylines, so you’ll have to wager on all ten of them at all times.

Bets start at 10p per spin and can be raised up to £100 if you prefer more spice in your life. Well, I’ll assume no one plays safe and bets only 10p at a time, after choosing to play an action-packed thriller like Wild Wild West! 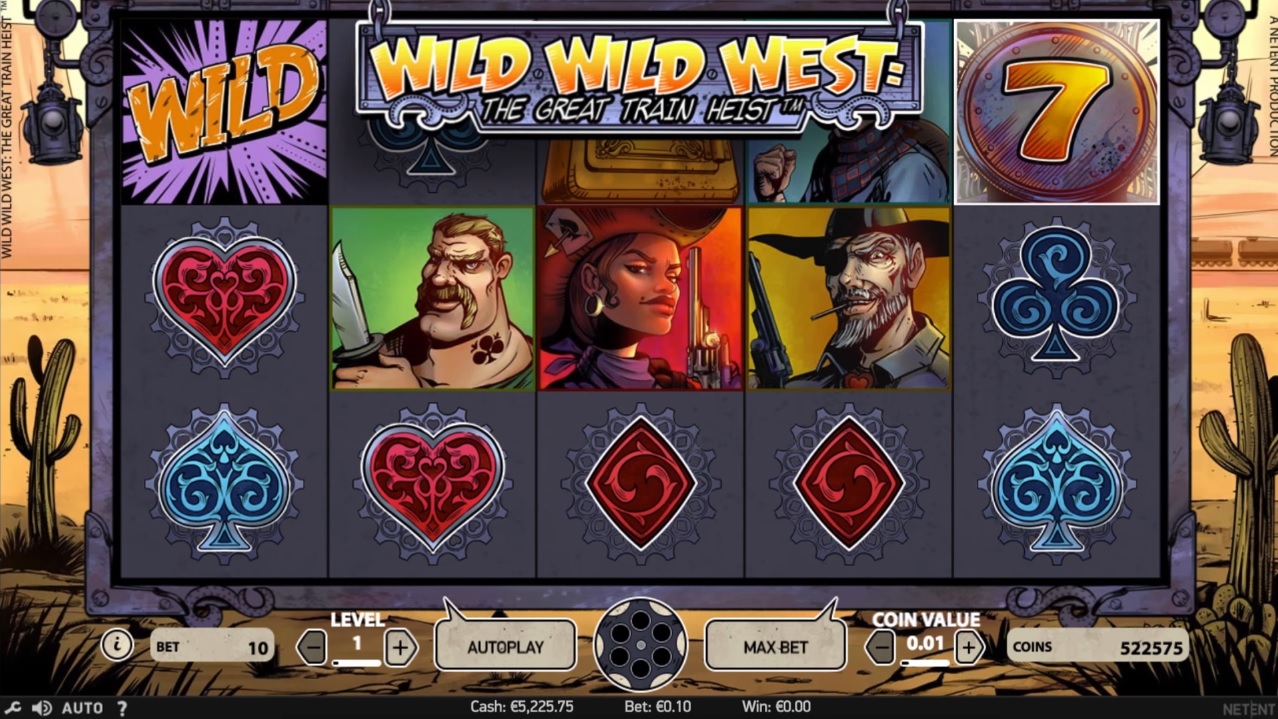 The four high-value symbols in this game are cowboy partners-in-crime, presumably on their way to that great train heist. These guys pay between 15-500x your bet.

The other four base game symbols are styled after playing card suits; these offer between 5x to 100x your bet per spin. The paytable pays up to 500x your wager in a single spin, by lining up five wild symbols or the female baddie on a payline. 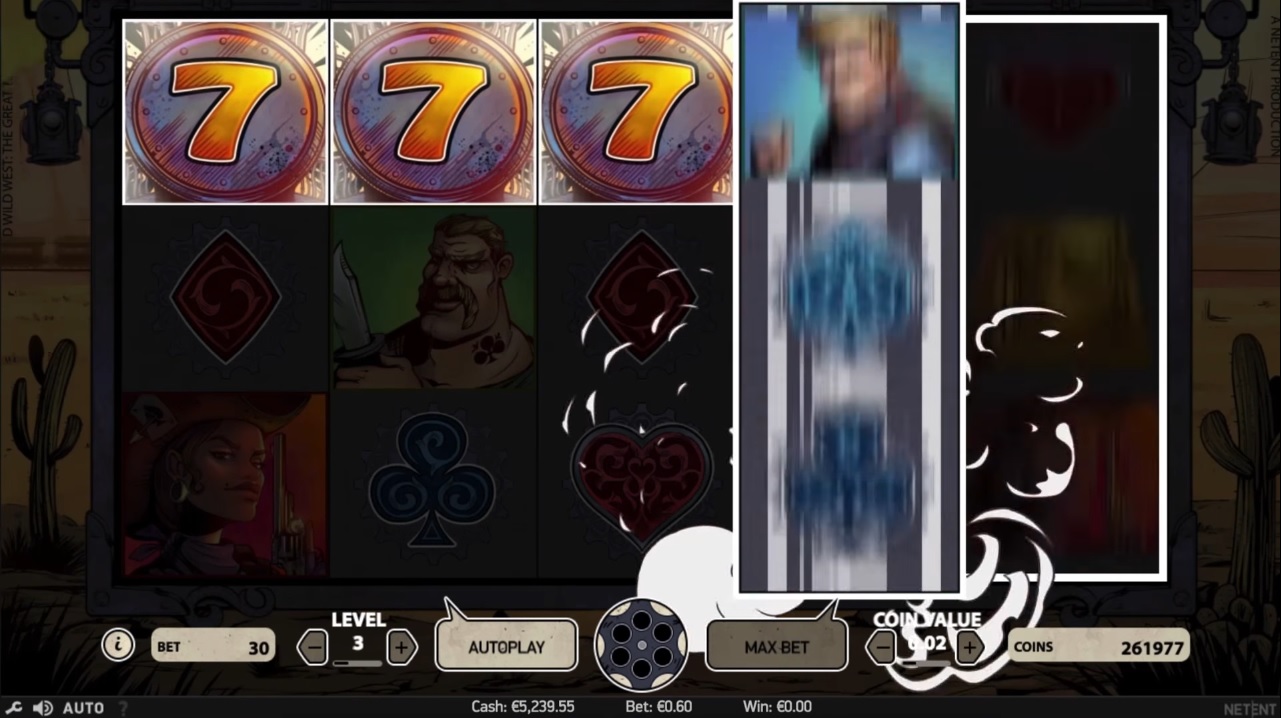 The RTP rate for this game is 96.74%, which is about one winning combination in every five spins. This hit rate is relatively higher than most slots, making it a rather low-volatility slot.

You can expect a frequent stream of small wins, each like a little dose of adrenaline mixed with ecstasy that will keep you on the train. In my opinion, this is what makes a good slot.

There are up to 30 free spins on the road. You need at least three Scatter symbols (number ‘7’) to unlock 10 free spins. Come across four Scatters and you’ll get 20 free spins; five scatters and you can run wild with 30. 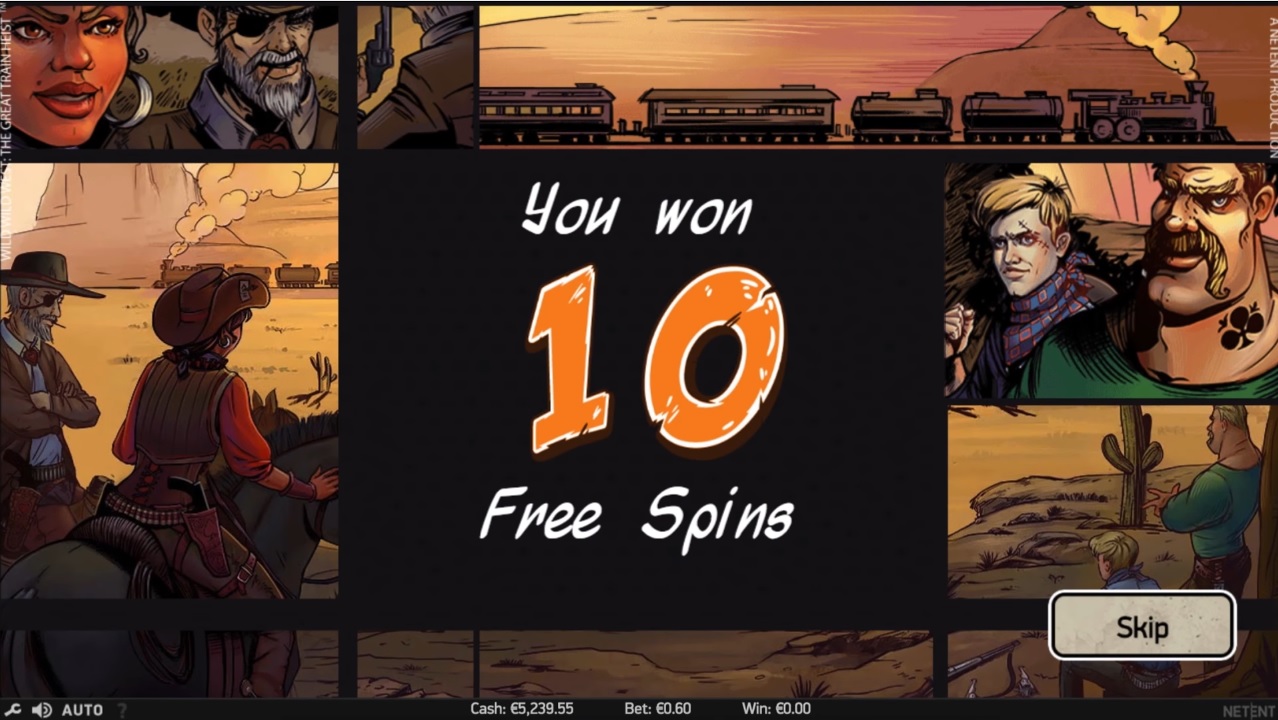 Where are all those Wild symbols in a Wild West game, you ask? Right here! During each extra spin session, you’ll be randomly allocated one of four different wild features: 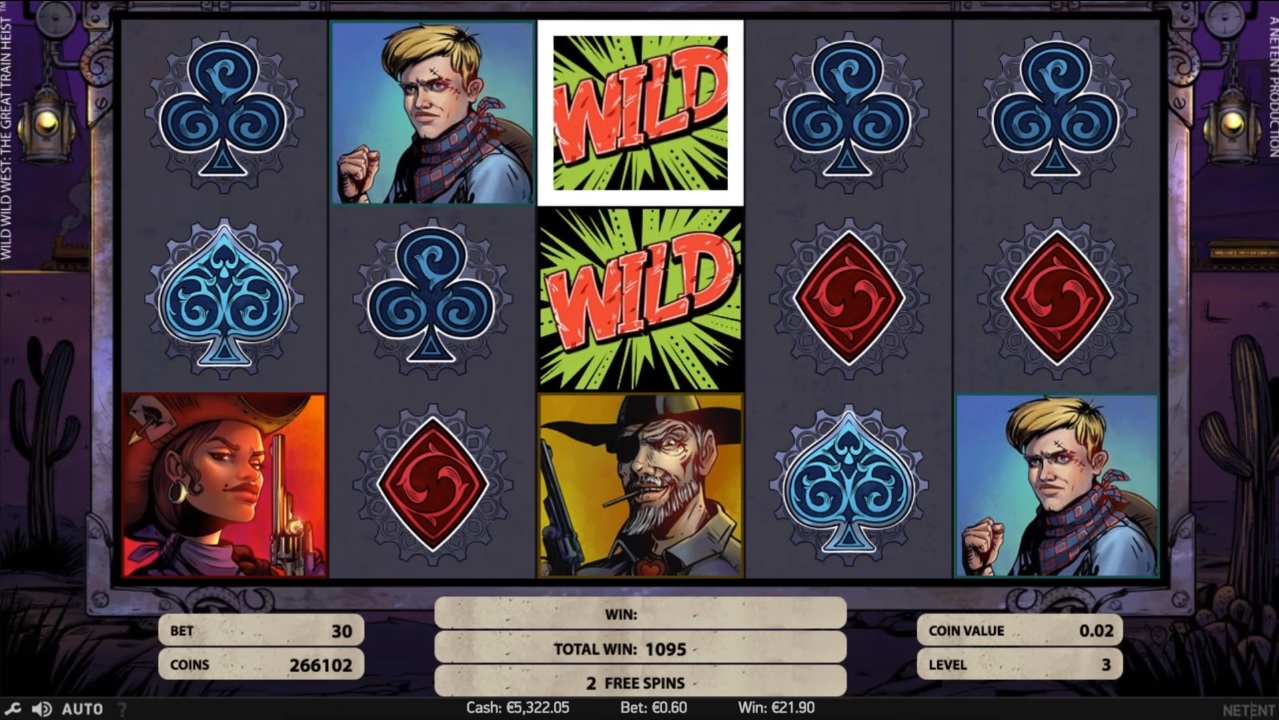 A Wild selector wheel appears before the free spins session, so you can get in on the randomization action. 10-30 free spins is a good number too, so you’re almost guaranteed to win something during each session. 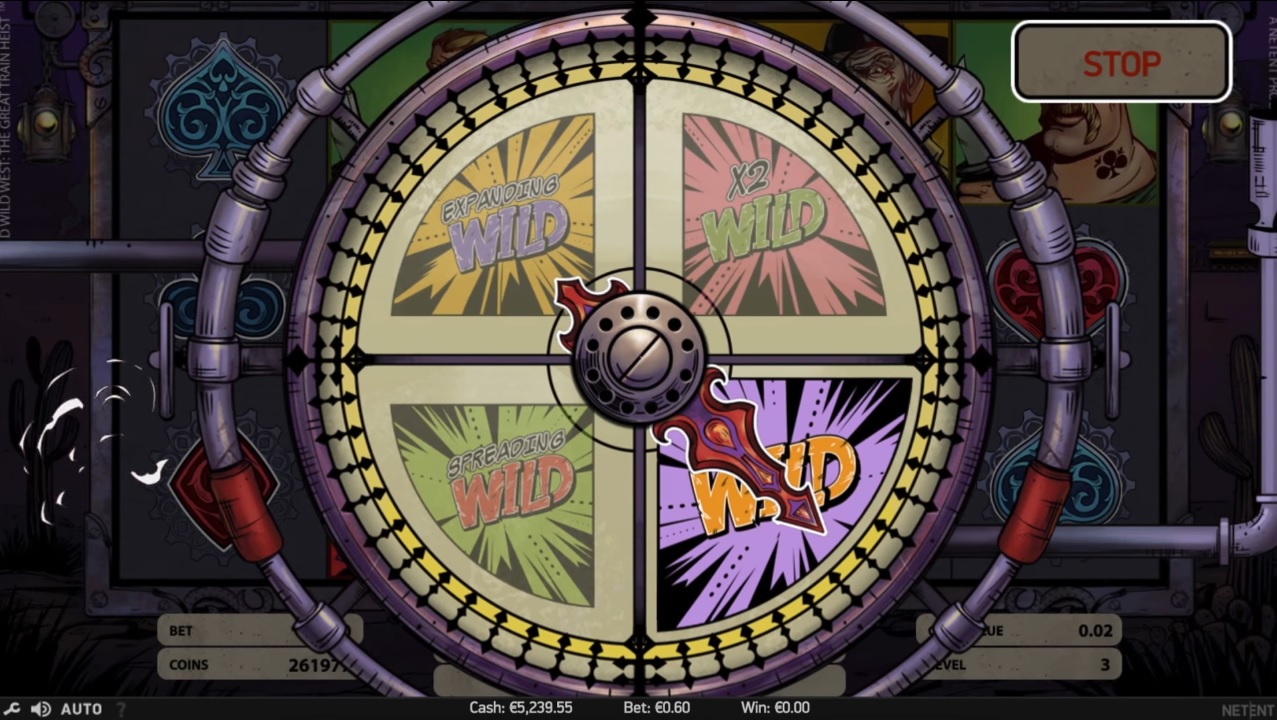 The other surprise is packed inside the golden safes. If three golden safe symbols appear on screen at the same time, you’ll get a chance to pick one. The safes can hold anywhere between 5x and 50x your bet.

The designers have chosen to go down the animated, comic-book styled route with Wild Wild West: The Great Train Heist. It relies on big bold graphics, rather than rugged, yellow-coloured visuals to set the mood.

It’s not particularly Western, but this aesthetic choice works especially well on mobile devices. The bright colours and sharp outlines look great even on smaller screens. 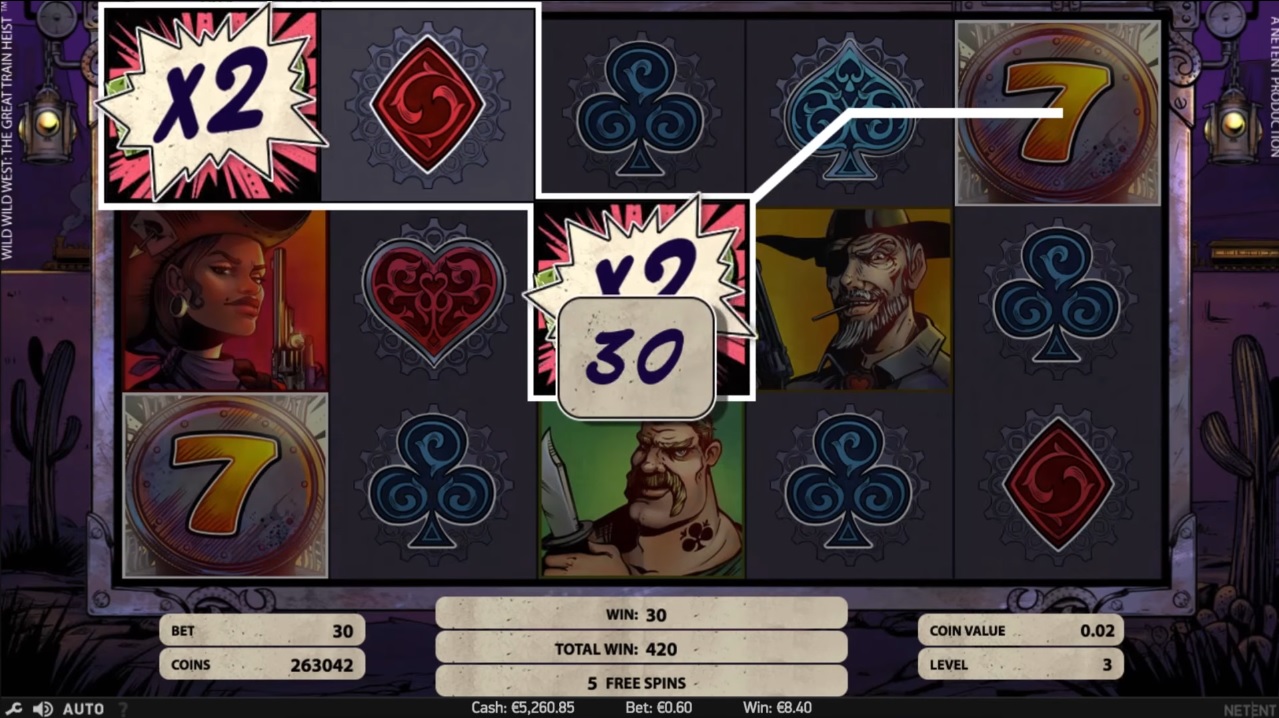 Another element that really brought the whole theme to life is the music. I have said this before and I’ll say it again, NetEnt has some of the best music arrangers on their development team. The upbeat casino music speeds up when you’re due for a win and the awesome foursome shoot their pistols in glee.

The game even shares your melancholy when the reels let you down! A whip cracks disappointingly in the background. The game engine, animations and music gel together really well to deliver a remarkable gaming experience. 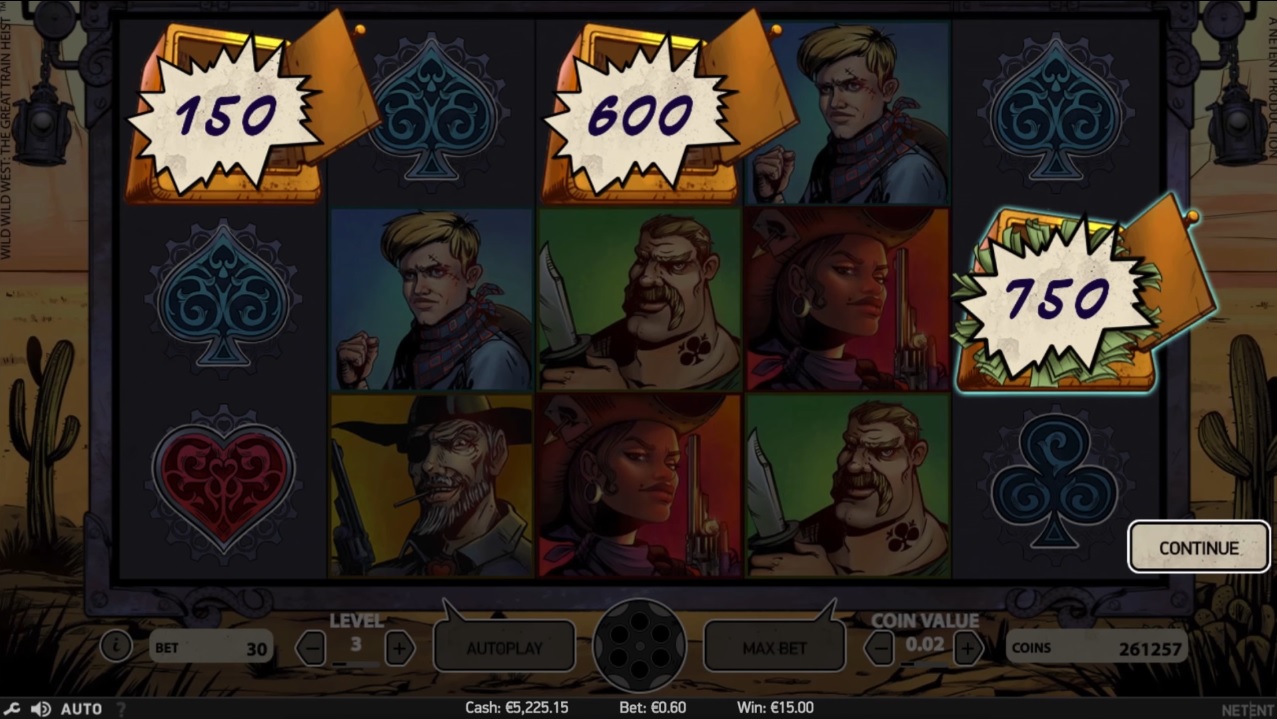 The Wild Wild West: The Great Train Heist is a brilliant, fast-paced game. I can’t decide whether it was the superb audiovisual production or the constant flurry of Wild symbols and free spins that got me, but I really got caught up with the entire game. You came for an adventure and an adventure is what you’ll get!