Universal Monsters: The Phantom’s Curse is NetEnt’s slot based on The Phantom of the Opera. The game was even called like that at first but had to be renamed after running into some licensing issues. After all, there’s now another video slot that shares the same name by Microgaming.

Although released a tad bit later, we believe The Phantom’s Curse surpasses its competition. The game is polished almost to perfection and features many exciting features.

Whether you’re a fan or not, you will probably enjoy giving it at least a few spins. Take a look below at the game features and the gameplay to get a better idea why we’re promoting it so ferociously. 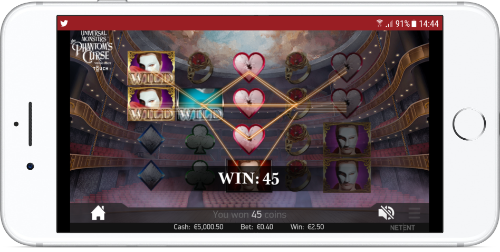 It’s a 5-reel and 4-line video slot with 40 fixed paylines. There are 10 regular symbols in the game plus five types of wilds. Some of them are stacked, just like most symbols often are in the base game. The bet size limits are 20p to £40.

The maximum win isn’t that impressive, only 400x your bet per spin. However, the game has a bonus spins feature that could theoretically last for hundreds of spins, which potentially increases the maximum win.

The wins from basic symbol combinations aren’t huge. The four lowest-paying symbols (card suits) will just return your initial bet if you collect a single five-of-a-kind. The highest paying symbols will return up to 10x your bet. This is the case with the Phantom and Christine symbols, as well as all wilds. The slot game’s RTP is 96.57%.

When the Phantom stacked wilds and the mask stacked wilds land fully during the same spin, Masked Phantom Re-spin is triggered. What it does is basically turn all present wilds sticky for a single re-spin. Much more intriguing is the Pick and Click bonus. It is activated with the Phantom and Christine stacked wilds simultaneously.

The Pick and Click bonus will transport you into Christine’s room. There, you will have to choose roses which hide cash bonuses. When you reveal an X symbol, you get to the second round where you’ll have to choose from three mirrors. Each hides a multiplier up to 3x that applies to the wins collected in the previous round. You could win up to 360x your bet this way.

The game also has scatter symbols on the first, third and fifth reels. You’ll need to get them all to trigger the bonus spins. Their number isn’t fixed. Instead, the bonus round ends after a Phantom wild lands on each separate reel at least once during the round.

Every time it does, however, all the wilds on that reel are put together into a stacked wild. If you’re lucky enough, you could be spinning for quite a while, collecting big wins before it’s over.

All the symbols and bonuses are highly thematic, so you’ll always feel like you’re playing the Phantom’s Curse and not anything else. The dramatic soundtrack full of classic music motives also makes the gameplay of this slot unique. By the way, the game takes place on stage in an empty theatre hall. It’s a background that will instantly give an idea what the story is about.

We particularly like the broken low-paying symbols and the smoke in the hall that brings some mystery into the mix. The game also has an intro movie and short movies for many bonus features. To put it simply, NetEnt paid attention to every single detail in this game to reveal the theme in every way possible.

As for user interface, there’s nothing original here but it’s not a bad thing in this case. What matters is comfort and adaptability. Like in all NetEnt games, you’ll find options for autoplay, bet and coin size selection and all the rules just one click away.

There are also sound options and quick spin option which will make the game faster. You can increase the game speed even further because the game allows skipping the reel spinning animation at any moment.

Five different wild symbols seem like an impressive feature, though it sounds better than it actually is. They’re all just the same wild, though they do trigger different bonuses. This is an interesting and not a very usual gameplay solution. Despite that, however, we think that the bonus spins round deserves more attention.

It’s these free spins that make Universal Monsters: The Phantom’s Curse a great game. That’s because the number of spins isn’t fixed and that’s something we don’t see very often either. What’s more, this feature could bring a lot of money for lucky players. It outweighs the fact that the game doesn’t have a big maximum win.

So, Here’s Our Take On The Game

Universal Monsters: The Phantom’s Curse slot couldn’t complete with many other games in terms of payout. However, it’s definitely interesting and can be very lucrative for those who are patient enough to wait for those bonus spins. Even if some other slots are more lucrative, this is a great title to simply enjoy. At the same time, it features an average return to the player, so you can play it without much risk.

Having said that, Universal Monsters: The Phantom’s Curse isn’t a low variance slot. The wins aren’t extremely frequent and the minimum bet isn’t that low either. If you expected that, don’t get carried away because that’s easy to do on a game which is executed so beautifully.