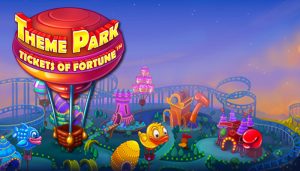 Come one, come all to the greatest amusement park on earth! NetEnt presents Theme Park: Tickets of Fortune, an amusement park for adults only. You’ll experience the same adrenaline rush you’d get from a rollercoaster ride, while watching your money spin around this exciting slot engine. Instead of impossible-to-win game stalls and cheap prizes, you’ll win actual cash! This slot game also features Stacked Wilds, Claw Feature and giant 400x wins; all of which are sure-fire ingredients for slot fortunes.

This slot game is made up of 5 reels and 50 paylines. The reels are loaded with ten different carnival-themed symbols. The lower-valued symbols are colourful balloons while the higher-valued symbols are carousel characters. The payouts range from 2x to 400x your wager and the game’s overall RTP percentage is a healthy 96.52%. This means that you can expect good and fair returns from playing this game. Your entry tickets to Theme Park: Tickets of Fortune start at only 20p per spin. To amp up the thrill and rewards, you can vary your wager size all the way up to £250 per spin. 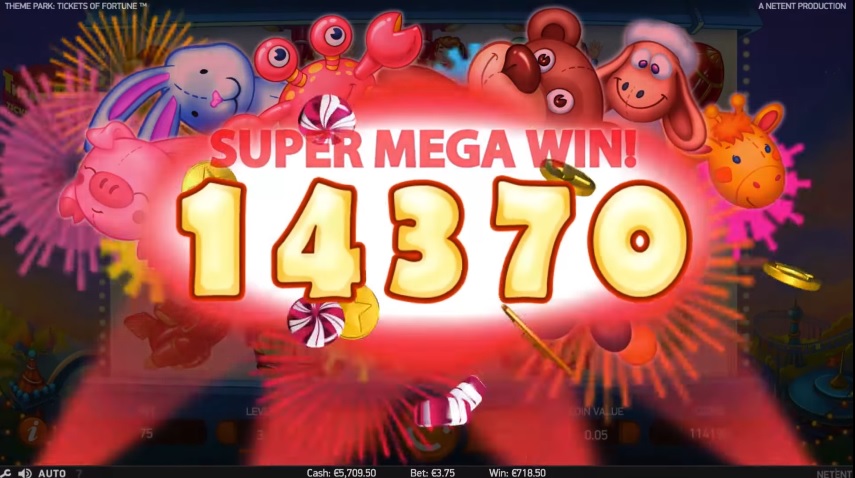 Besides the whopping number of paylines, this slot game also features NetEnt’s glorious Stacked Wild feature. These symbols are the roller coaster cars that are connected to each other on the reels. These Stacked Wilds substitute all other symbols on the reels (except the Scatter, Bonus and Claw symbols) and increase your chances of winning. Not to mention, win-lines that include these Wild symbols pay much more than those without.

There’s also the familiar Claw game that you’d find in amusement parks and arcades. Whenever the Claw symbol appears on reel 5, a toy picker will grab a toy from under the reels. No matter what toy is pulled out, you’ll get to pocket a coin win between 2x to 15x your current wager.

True to the theme park theme, NetEnt has set up different mini game booths after classic carnival games. Instead of winning silly keychains or poorly-made soft toys, you’ll win cold hard cash! There are six different games in all: 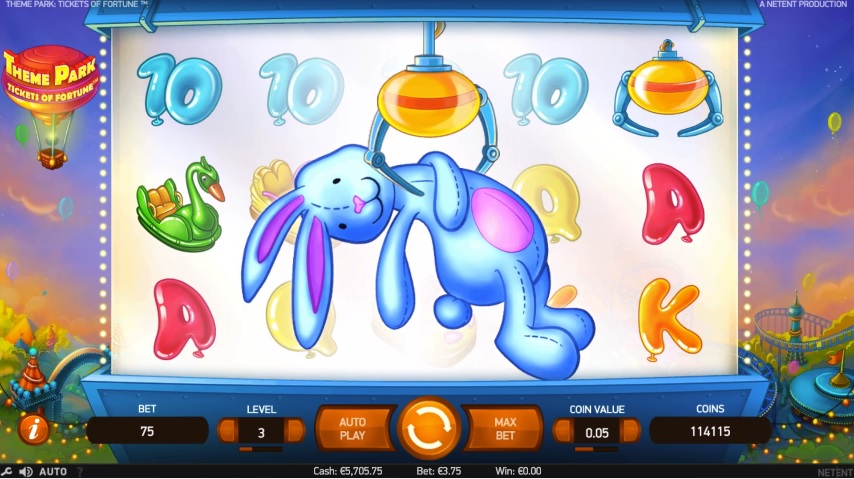 It was really nice how NetEnt adopted the same mechanics in their virtual iteration of each game, so you never have to figure out how to play. If there’s a ball, throw it; if there’s a hammer, whack it! Anyway, you’ll get five separate tries at each game. Prizes range from 2x to 100x your current bet amount. Psst… the most profitable game of all is the Duck Shoot. These duck offer both coin wins and multipliers, while other mini games only give you one or the other. The Can Tower game comes in close second. If you can knock down every single can, you’ll get a special 864x win! 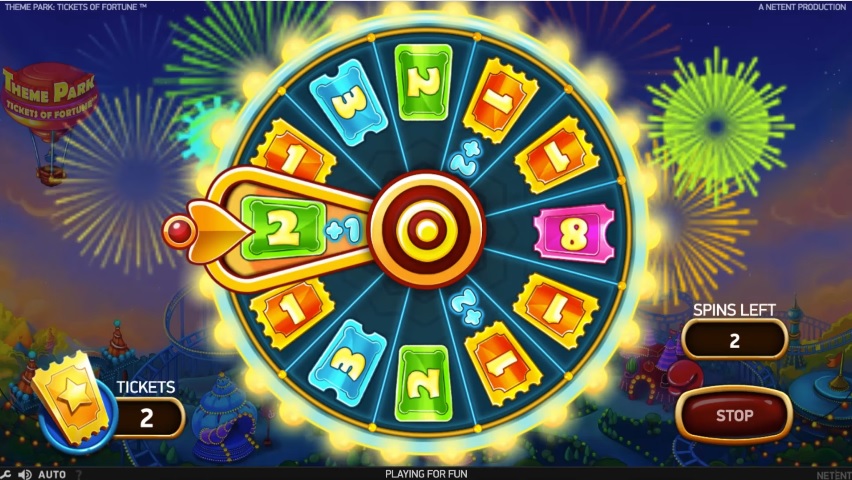 So, how do you get into these mini games? There are two ways, in fact. You can either get the bonus game symbol on Reel 5 or earn entry tickets by getting Ticket Scatter symbols. Before the mini games commence, you’ll spin a wheel to determine which of the six game booths you can visit.

NetEnt has literally recreated the entire fairground experience in your mobile device. It’s wonderfully bright and colourful, but not in a tacky or childish way. The game is set to a happy soundtrack that really completes the experience. Really, the only thing missing from this experience is some candyfloss, noisy kids and warm summer air. If you’re at home, I suggest that you grab a can of beer and sit yourself down for a good time. 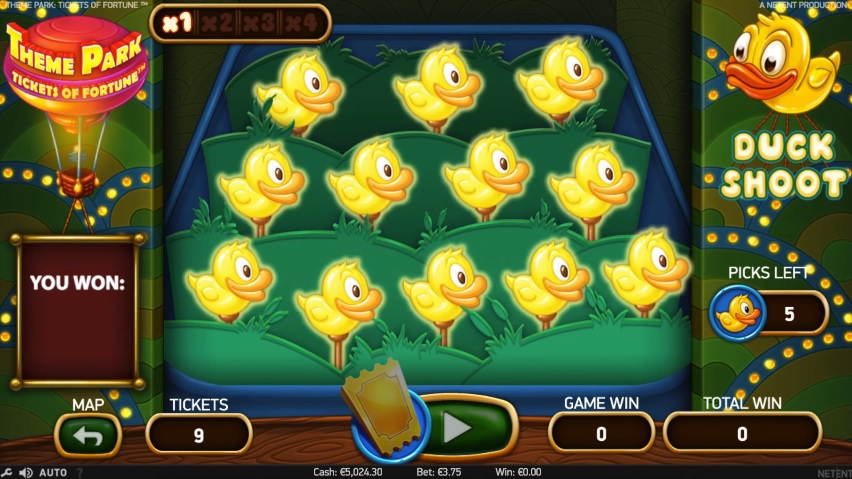 Some players have drawn uncomfortable parallels between this carnival-themed slot game and the actual carnival experience. Most of the time, the mini game booths cost more money than they are worth. In my experience, I only won about 5x to 20x my line win in each visit to the booth. That’s not much compared to the kind of wins in the base game. At the end of the evening, you might accidentally spend more money in the game than you had initially planned. Of course, there are some stellar prizes to be won but that all depends on your luck. Like it or not, that’s the reality with every slot game on the shelf. 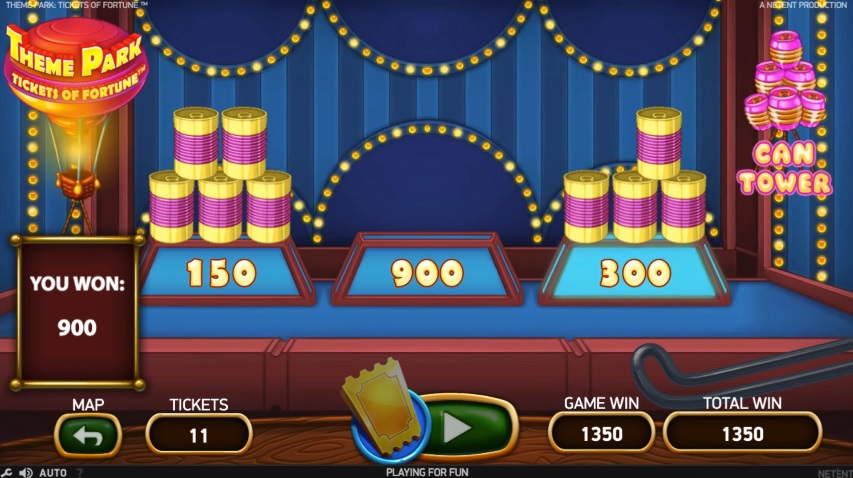 One thing’s for sure: you’re bound to have a good time with Theme Park: Tickets of Fortune. No matter how old you are, a trip to the theme park is a magical experience. I had such a good time rediscovering familiar carnival games in the bonus rounds.

Meanwhile, the base game delivered enough payouts to sustain my quest to try every single bonus game there was. You don’t want to miss out on such a fabulous slot experience!