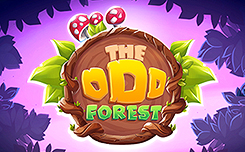 If you haven't heard of Foxium before, The Odd Forest is a great example of their software. This new developer makes slots that combine gameplay with storytelling, creating beautiful and original games with a twist.

The Odd Forest mobile slot is just like that. Not only do you spin the reels, you also have a task – to beat the spider that infests the odd fairy forest.

Although Foxium released their first slot in 2015, the company seems to have the experience of many years. As a result, the newly added mobile slot should satisfy those who play both for fun and for money. For now, just take a look at how beautiful the game looks. 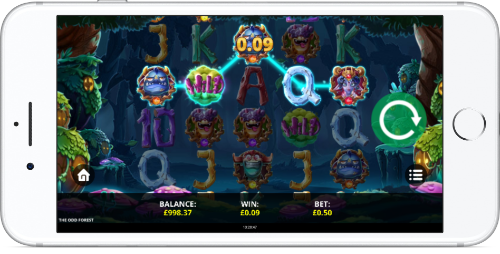 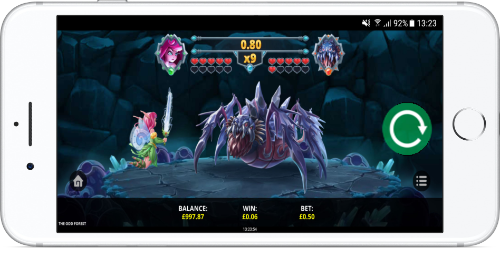 The Odd Forest slot has 5 reels, 4 lines in each reel and 50 paylines in total. Since there are so many paylines, the separate wins are relatively low. Most four-symbol combinations don’t even return all of your bet. However, the wins are frequent, so there is balance in the gameplay.

Although payouts come often, it has a medium volatility, so you can still win quite a lot. The betting limits are from 50p to £50, so The Odd Forest won’t suit low rollers with extremely limited bankrolls. Those who can afford it can also win big, though. Even the base game can offer quite impressive wins that can almost equal those of the bonus rounds. Speaking of bonuses, the slot features multipliers, sticky wilds, pick-a-win bonuses and more.

There are nine regular symbols in the game, plus wilds and two special symbols. Aside from the 10 to Ace card values, the symbols depict fantastic and odd forest dwellers. The special scatter symbols include a tree and a fairy. For the reel layout of that size, the variety of symbols is just about average. The game has 96.12% RTP. 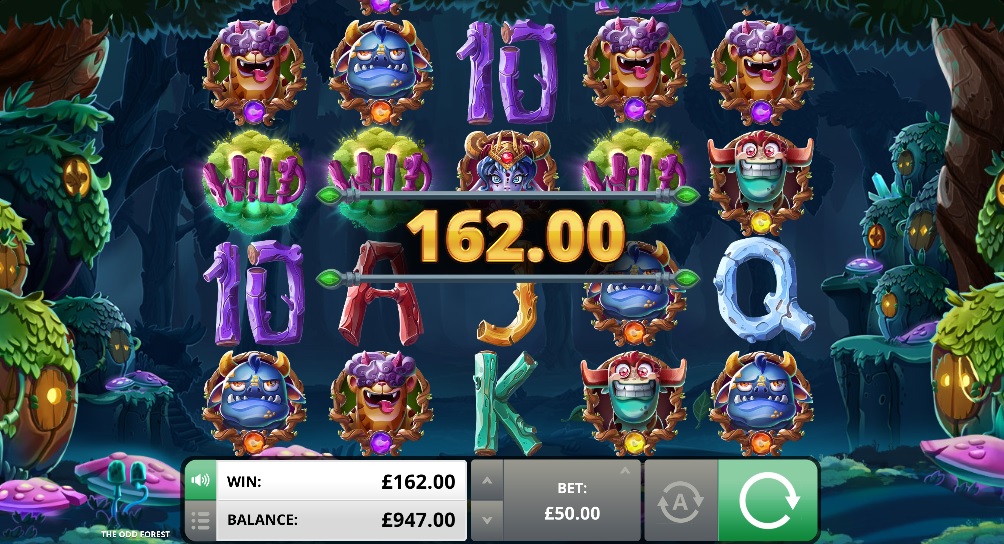 There’s a pleasant variety of bonuses on The Odd Forest mobile slot. We played it for quite a while but didn’t get bored or tired one bit. For example, a random extra wilds feature may trigger during any spin, adding three to six additional wilds on the reels. This usually results in a decent win – thank you, mysterious fairy!

If you collect three tree scatters, free spins round begins. You can then choose from four different bonus rounds:

All of these can be re-triggered during the bonus, adding from two to five more free spins for that round. 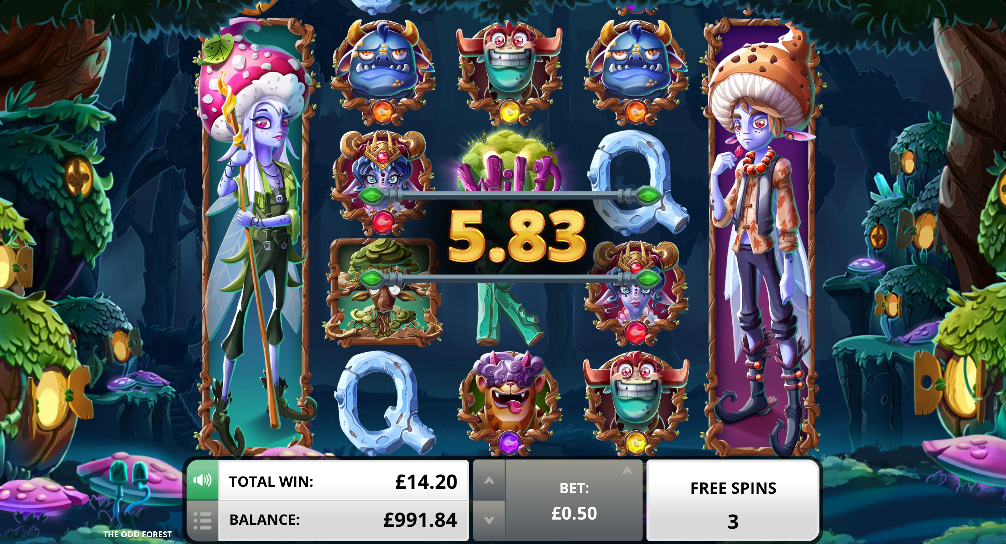 What’s more, if you collect three fairy scatters, fairy bonus begins. This is the bonus that’s the most exciting and unique. You will accompany a fairy on its journey to defeat the spider boss. There are four stages in this bonus.

At that point, you’ll simply have to spin a reel to determine who will attack next and the attack strength. Each combatant has multiple lives, so it’s a long battle and you get bonuses for hitting the spider too. If you beat the spider, you get a reward equal to 50x your bet (multiplier doesn’t apply to it). 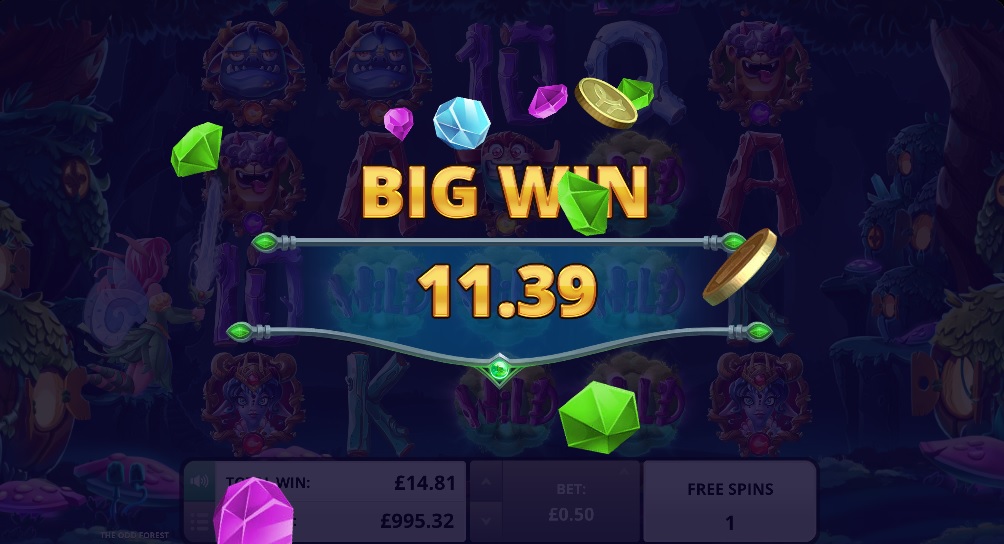 The user interface on The Odd Forest mobile slot isn’t obstructive both on desktop and mobile. At the same time, it manages to present all the necessary info and options very efficiently. Everything is literally just one or, at most, two clicks away. There’s an autoplay function with many advanced settings, visual and sound settings and simple bet size selection.

The game is extremely appealing visually. The background of The Odd Forest is dynamic and lively. The sounds are soft and don’t get irritating after a while. The music, too, makes you think of magic and mystery, perfectly fitting the theme. As a result, our experience playing this slot was really pleasant. 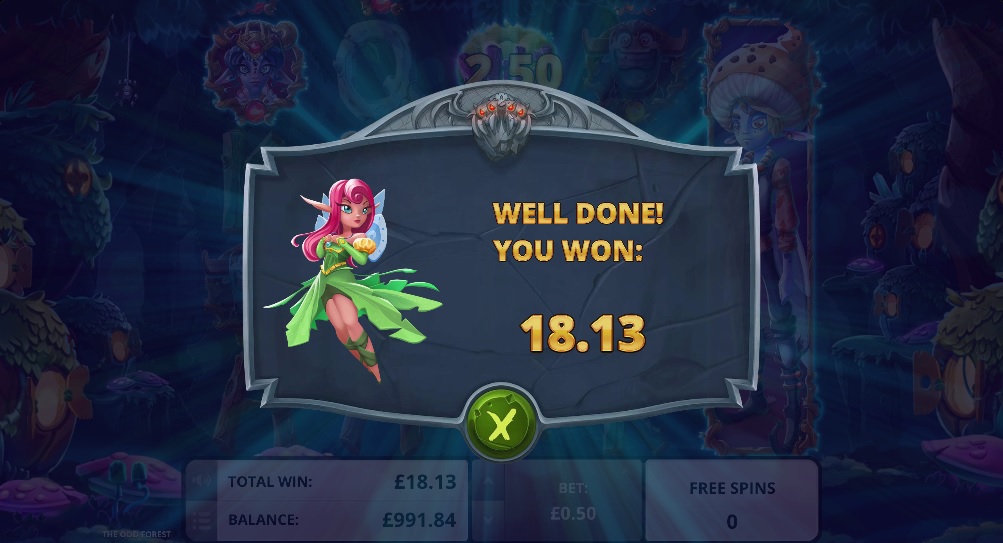 So, Here‘s Our Take On This Game

The Odd Forest slot has a stunning gameplay. If you want a slot that is beautiful to look at, this is what you’re looking for. Especially if you’re into the fairy or magical forest theme, which isn’t original in itself. However, Foxium complemented the theme with a twist of their own that’s definitely creative.

This slot isn’t just all flash and no substance, either. When it comes to the winning potential, The Odd Forest can really surprise, paying you mega wins out of nowhere. Both the free spins and fairy bonuses are highly lucrative. The fairy magic might conjure up to 500x your bet without a multiplier, so don’t underestimate it.