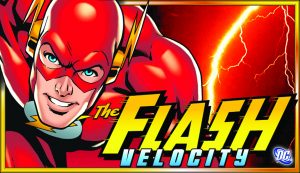 Here’s another action-packed slot for your entertainment – The Flash! It’s from the NextGen Gaming Justice League series, created in partnership with DC Comics.

Our speedy superhero’s slot is packed with an entire array of money-making features. There are Wilds with multipliers, Expanding Wilds, Spin Replay and some free re-spins too.

What’s slightly ironic is that it’s the villains that deliver most of these features, not The Flash. Thanks, baddies!

It’s a game that is targeted at players with slightly bigger budgets. It also presents the option of wagering an extra 10 coins per spin to activate the Bonus Bet. That’s 10p to £20p extra, or 20% on top of the usual bet. 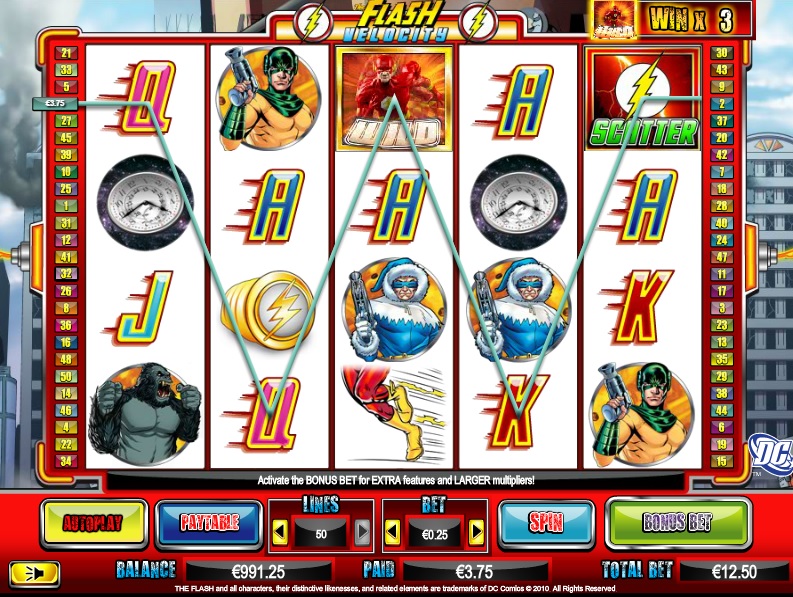 The Flash slot reels are composed of ten base game symbols. The highest-paying symbols are the three villains:

You could win up to 250x your wager with five of them lined up on a payline. Then, there’s a bunch of gadgets (a compass, a torchlight and The Flash’s speedy boots). Finally, there’s J, Q, K and A.

The Flash himself is the wild symbol and replaces all other symbols on the screen except scatters.

The value of the Wild Multipliers varies based on whether or not the Bonus Bet is switched on. Three times without the feature or 5x in the base game. If you turn it on though, an impressive 10x multiplier during the free games applies.

Before we dive into the features, here’s a little public service announcement.

Make sure you activate the Bonus Bet option. Simply press the button on the right hand side of the screen to do so.

Only then will you be able to enjoy the fantastic Rogue Gallery feature. Keep in mind that activating it tacks on an extra 10 coins onto the cost of each spin. The increase is almost negligible, though. For example, a 50p bet becomes 60p and a £1 bet becomes £1.20. 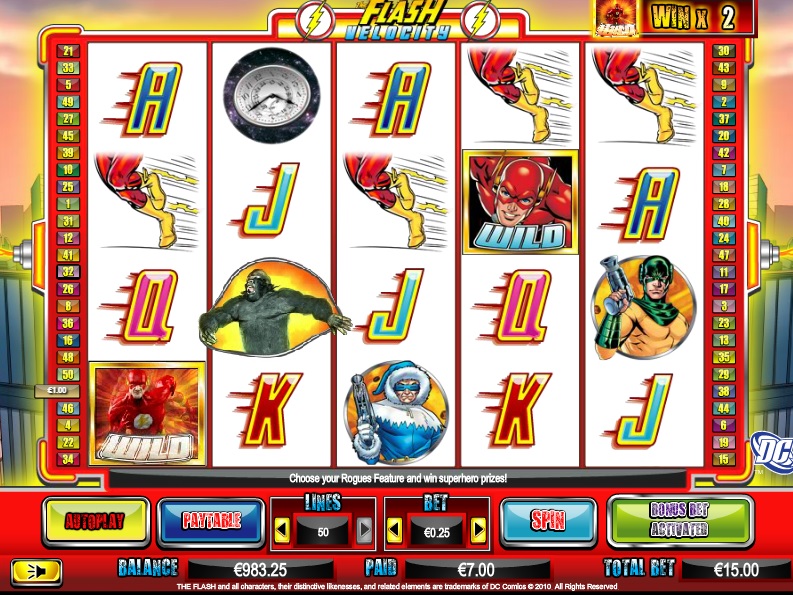 The first bonus game is Titled Rogue Gallery. When you get it, you’ll pay a visit to all of the iconic villains in this DC comic series. But first, you need to get yourself three or more scatter symbols on the reels. The scatter is the logo of the Flash. In turn, it awards you with 12 free spins.

Before your free spin series begin, you get to choose one of three villains, along with their uncharacteristically helpful evil powers. 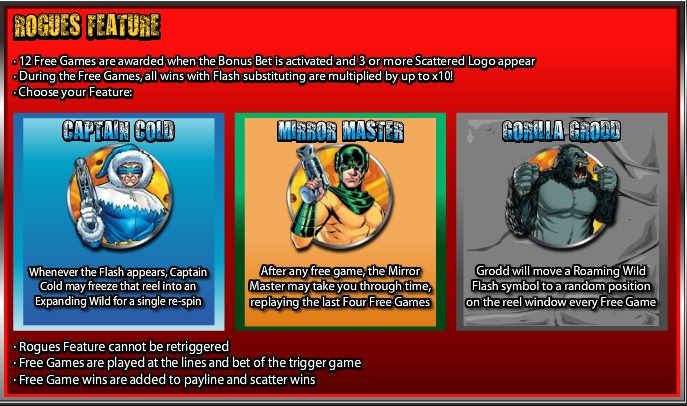 From our experience, Grodd was the most reliable villain of the three, in terms of delivering wins. Mirror Master was a little bit of a hit and miss while Captain Cold didn’t appear quite often enough.

Aside from the Rogue Gallery free spins, there is also a Speedsters feature baked into the base game. The Flash might just zoom past the screen and turn extra symbols on the reels wild. This happens at random, so try not to blink! 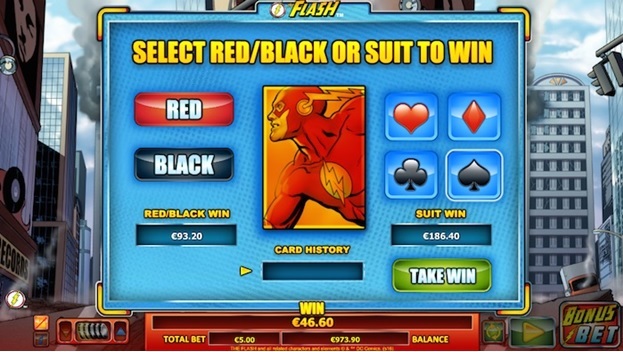 Finally, there’s a Gamble feature too. In it, you have to guess the correct colour or card suit to win. It’s a classic game of risk. If you dare, you could multiply your win by up to four times. Of course, if you lose, you’ll walk away with nothing.

The game is set against the backdrop of Central City. When you choose the increased stakes, the backdrop changes too. Now, you’re in the heat of the action and the reels light up with an intense red glow.

Be it the artwork or the animation, this slot machine is executed to perfection. NextGen Gaming really honoured the DC Comics series. It brought the original comic book characters to life. 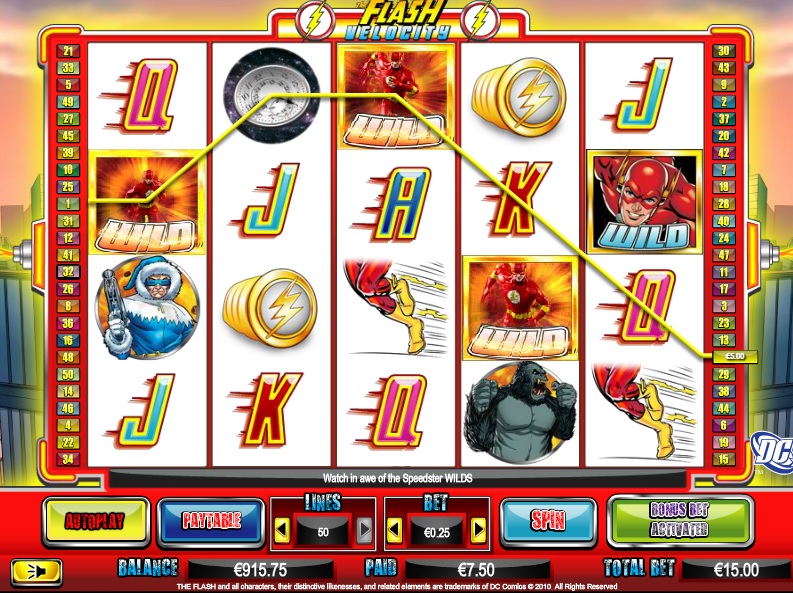 Would you like to know about how The Flash came to be? Here’s Barry Allen, a forensic policeman well-known for always being late (ha!). His transformation came when a lightning bolt shattered a case full of chemicals. It then spilled all over Allen.

With his newly-minted speed, he dubs himself The Flash and becomes Central City’s resident crime fighter. 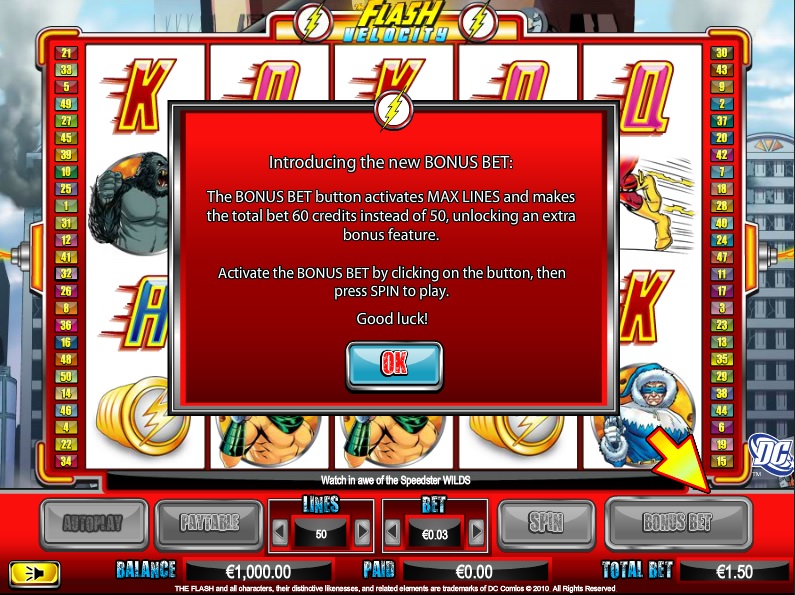 Of all the games in NextGen Gaming and DC Comics slot series, The Flash slot is the most easygoing of the lot. The Superman online slot had more features and Batman was heavy on the animation. In contrast, The Flash packs all of that action with a light touch.

It also matches the payouts offered in the heavyweights’ slots. Before you get on, We’ll leave you with only one piece of advice:

Don’t forget to activate the bonus bet. The features are too good to be missed. Now, you're ready to play The Flash slot for real money.