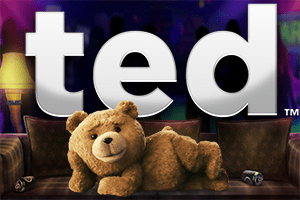 Hilarious and explicit. That is a combination that can never go wrong in any movie you watch or any game you play. If you have watched Ted, you would know exactly what we are talking about.

As foul-mouthed as the little cute teddy bear is, he is as hilarious as a character can get. If you have not watched that movie, do yourself a favour and watch it. If you already have, time to enjoy more of Ted in this game.

Fortunately, Blueprint Gaming has brought Ted's character to life with flawless accuracy. And that’s just the tip of the iceberg too. Aside from the coating, the slot is filled with bonus features that we can’t get enough of!

True to character, you will find Ted passed out on his couch after having one too many beers. Empty cans are lying all over and the reels are emitting a TV-like glow. Ted will even use his remote to turn on some of the bonuses, once he awakens from his stupor. 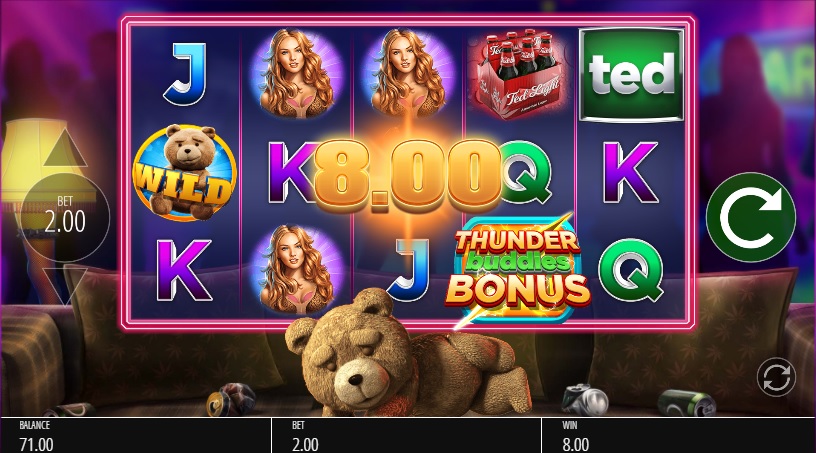 All of the symbols and characters in this game are from the movie. So, don’t be surprised when you find his girlfriend, beer and even some bongs on the reels.

Naturally, the highest paying symbol in this slot is the Ted symbol (which is also wild). Getting five of them in a payline will reward you with up to 25x your spin wager. 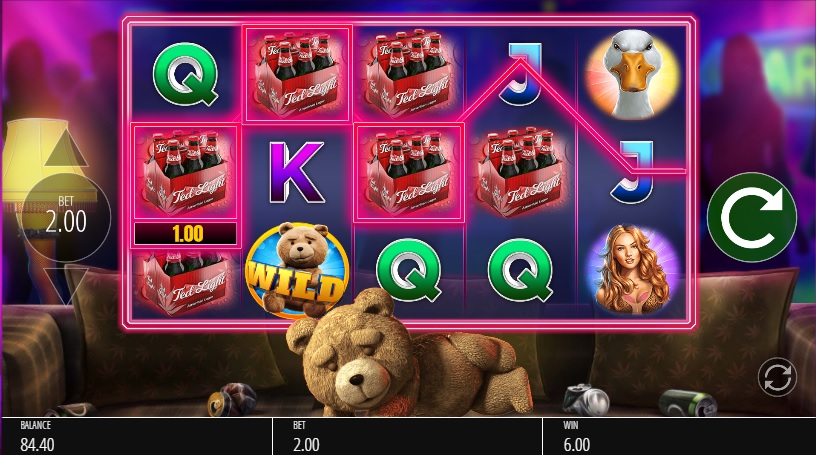 The game's variance gives its players wins of both decent sizes and frequencies. From our experience spending time on this slot, most of the wins come from the bonus features. Trigger them every now and then and you shouldn’t be at all worried about blowing your budget.

We will be quite frank here: this slot is absolutely packed with bonus features. In total, you will find 11 bonus features including the Wilds.

As mentioned previously, you will find Ted fast asleep in the game. However, when decides to wake up randomly, he will award you with any of the following six bonus features: 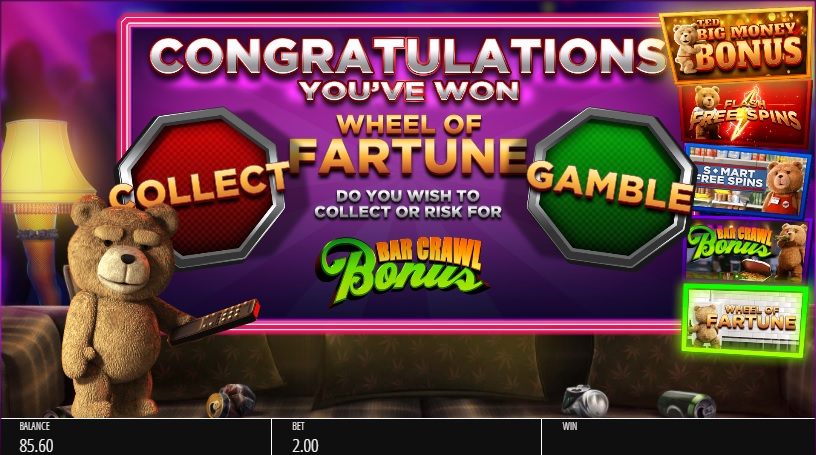 Next up are the set of features that are triggered by scatters. In short, you'll need a minimum of three Thunder Buddies bonus symbols anywhere on your reels.

Having done that, you will be asked to spin a wheel. It will determine which feature you play. Here are the details: 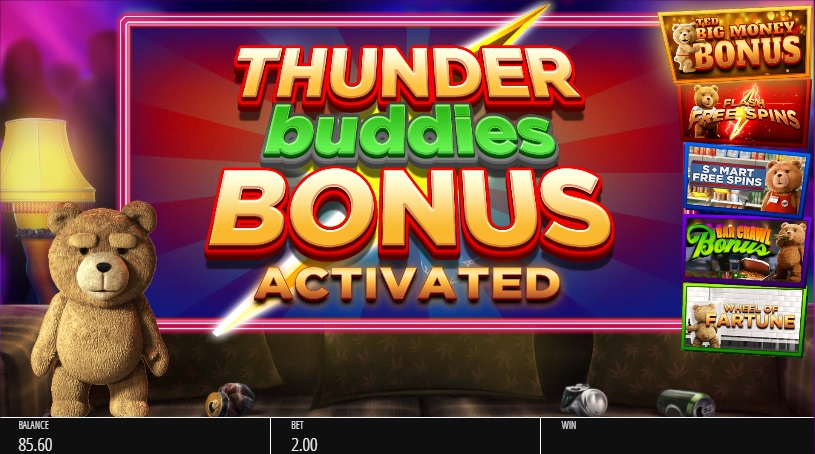 In our opinion, it's a massive challenge to make a slot that lives up to the success of the original movie. Everyone who has watched it will expect the same level of quality from the game too.

Fortunately, Blueprint Gaming has not only met but also exceeded expectations in many different ways. The theme and the character of Ted is spot on. On top of all that, all of the features are designed around the theme. 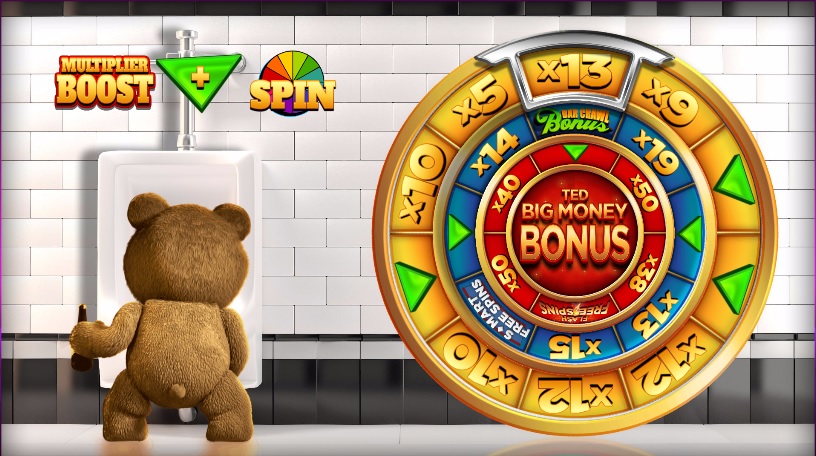 To make things all the more exciting, Ted even goes “come on, come on” every time you wait for the third bonus symbol to trigger the bonus features. Visually, we feel that Ted slot is perfect too.

Players may enjoy this slot regardless of what device they play on.

Where to Play Ted Slot Machine?

Ted is Blueprint's most celebrated slot or at least one of them. For this reason, you can find it on some of the best slot sites with Blueprint software. Today, we suggest you play it at one of these casinos:

Famous for its unique bonuses, tournaments and enormous prizes, BGO is a prime example of an online gambling site. It has hundreds of games available in its roster and a layout that makes it effortless to enjoy them.

Most importantly, you may find promotions with zero wagering requirements here, among other offers. BGO is always at the forefront of the newest trends in casino bonuses.

HIT THE BIG MONEY AT BGO

You may know this brand from its high-street venues, but it’s just as prominent online. The site has a sports betting section, live casino and other games from a dozen providers.

Its games may be enjoyed via any browser or a mobile app on iPhone and Android devices. So, there’s no excuse left – you can start playing Ted there in just a few minutes from this very moment.

A classic Nektan casino with a unique theme, Kerching boasts a collection of 600+ games. It also offers regular promotions on all kinds of games, and Ted is no exception.

You may pay using any of the popular payment methods today, including Boku. Withdrawals are easy as well, so it’s a great place to benefit from the multiple Ted slot features.

Having played this slot, we feel that it is as good as the movie back in 2012. It brought back the same level of humour and excitement that we experienced watching the movie.

As you did expect, we had an amazing time playing and reviewing this slot too. All the bonus features were meticulously designed, and oh boy, the fun was literally endless.

Let's put it this way. The Ted slot was so good that if we could only choose one slot to play for a whole year, this would be it. Everyone needs a Thunder Buddy after all!