Welcome to the tiny town of Santa Maria, Mexico. It is the year 1881 and this fanatic law officer, Captain Diaz has just outlawed the eating of tacos. Naturally, there is rebellion! The Taco brothers step up and attempt to overthrow Captain Diaz.

All this makes a very enjoyable gameplay, which is why Taco Brothers is such an iconic game at this point.

TRY IT NOW AT LEOVEGAS 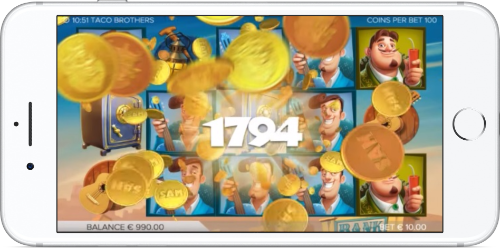 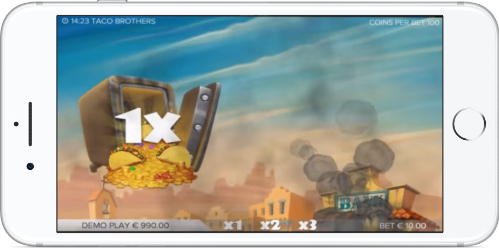 There are seven base game symbols in Taco Brothers. First up are the three brothers:

These guys can offer 50-400x payouts in a single spin. The four low-paying symbols – the guitar, the cactus, a bottle of tequila and the mining gear – are less attractive. They only return one-fifth to four-fifths of your wager for every winning combination.You’ll need to get a few winning combinations in a single spin to even break even with these low-value symbols. 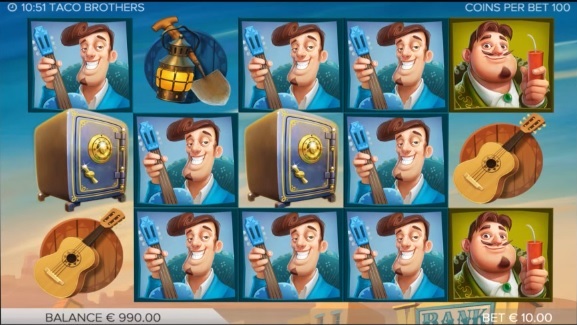 Along with the wacky storyline is a hilarious bonus game titled The Wild Escape. To activate the game, you’ll need to get three safe symbols on the reels.

These are Exploding Wilds. They’ll blow up and destroy everything on screen, rewarding you with a multiplier for the bonus between 1x and 3x. Then, they'll take you underground where Pico is held by Captain Diaz.

Now your free spins shall commence. 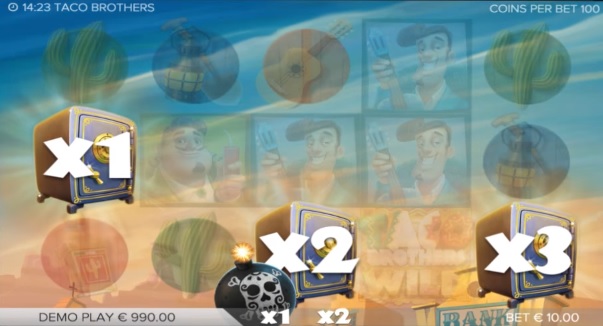 During this feature, you’ll follow the brothers as they try and escape from Captain Diaz’s vault. They’ll drop one at a time onto reel 5 and flee across the reels.

Dubbed as the Running Wilds feature, the three brothers’ symbols move from right to left. As they do so, they also replace other symbols to complete winning paylines.

The free games just keeps going until the brothers move over to the left-most reel and successfully escape. If one brother manages to escape, another brother is then dropped onto reel 5 and the Wild Escape continues. 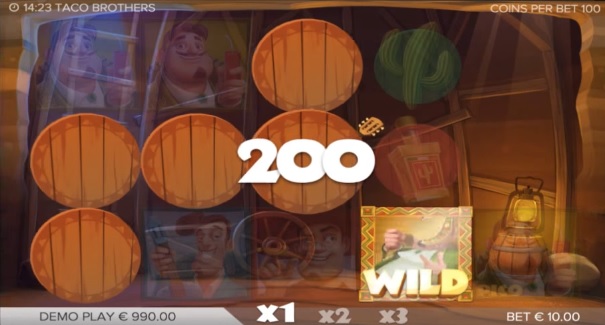 Nothing to complain about, as all players do is sit back and watch the free spins roll. The only hindrance is Captain Diaz, of course. Captain Diaz appears at random to imprison any Running Wild brother. If all brothers end up in jail, the bonus game ends.

But there's always hope even if some of the brothers get trapped again. The dashing Senorita symbol will occasionally appear, dropping new brother symbols onto the reel 5.

Essentially, this restarts the series of free spins. She also has a set of keys, so she can release any imprisoned brothers that have been caught by Captain Diaz. 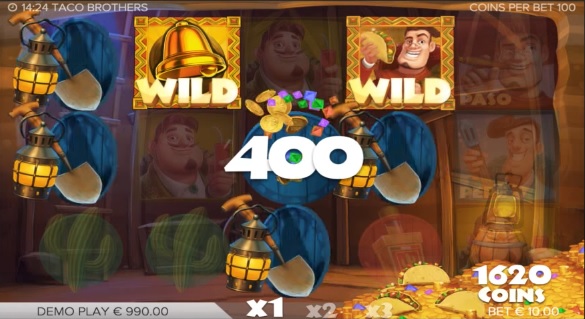 This game is downright gorgeous. From the stylish portraits of Pico, Paso and Pepe to the beautifully rendered animations, the Taco Brothers slot is a masterpiece.

Coupled with classic Mexicana tunes, the game evokes a fun little fiesta mood, as well as a sudden craving for tacos. The design team at Elk Studios has created a game that looks great on all devices – mobile, tablet and desktop.

Where to Play Taco Brothers Slot?

LeoVegas calls itself the King of mobile casinos and that isn’t far from the truth. It’s been around for many years. It has built its sportsbook, slots and live casino to perfection during that time.

You’ll find the most notable games in the industry there, such as Taco Brothers. Plus, returning players are often handsomely rewarded with bonus money, fun competitions and VIP perks.

Mr Play is a fun gambling platform with slots, table games, jackpots and other kinds of entertainment. With simple design but high-quality offering, it keeps most visitors fixed on their devices.

So, if ‘Play’ is your middle name, you might have found a perfect casino. With many payment options, a loyalty scheme and a generous welcome bonus available, you won’t go wrong with Mr Play.

bCasino is one of the newest and highly esteemed British-styled casinos online. On top of the top UK slots and live dealer games, it offers software from many other developers.

Besides, with a deposit code bNEW, you can get hundreds of pounds in bonuses and 100 free spins. The site is easy to use and includes weekly promotions too, so it’s a great platform to play Taco Brothers at.

Like all games created by Elk Studios, you can choose to play any one of the three pre-defined betting strategies:

The idea behind Jumper is that you immediately reinvest your winnings. Meanwhile, Leveller and Booster ensures that you recover all that you’ve spent and balance your bankroll. 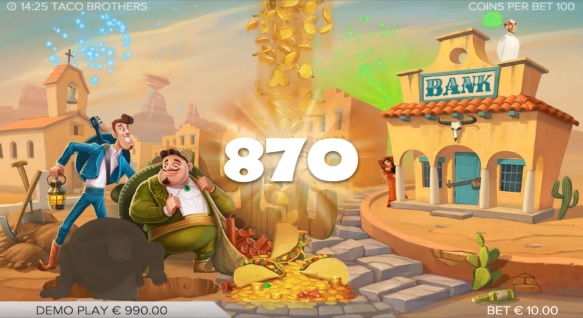 Granted, the base game can get a bit slow at times. There are sessions when 10 or even 20 spins go by and not much has happened. You glance at your bankroll nervously and wonder whether its time to call it quits for the day. Yet, given that the game has an house edge of just 3.8%, the wait is worth it.

Ever so often, you’ll be treated to the thrills of the Wild Escape bonus. Extra spin after extra spin, you’ll help yourself to extra wins and lots of wilds. That is when a slot becomes a winner. Thus, Taco Brothers has made it into our daily slot repertoire since.