For decades, Superman has stood as arguably the most iconic comic book superhero. His signature “S” badge and red and blue uniform must be recognized in every corner of the globe.

This guy has some of the most extraordinary powers in all of the comics. Heat vision, super strength, arctic breath, super-speed, x-ray vision, super hearing, flight, explosive radiation, protective force field… you name it.

He’s appeared in movies almost since his inception and lots of other spin-offs too.

In this article we take a look at the Superman game by NextGen Gaming. Created in partnership with DC Comics, this game features original artwork from the comics itself, action-packed bonuses and the potential to deliver up to 10,000 your wager in a single spin.

The Superman slot is made up of 5 reels, 3 rows and 50 paylines, so you can expect plenty of action in every spin.

There are 12 different symbols in all on the reels. Lex Luthor the villain and Lois Lane are the game’s top paying symbols, which can trigger up to 500x your bet in a single spin.

Other symbols include Clark Kent’s glasses, Kryptonite, a broken chain, a skyscraper from Metropolis, the Daily Planet logo, the iconic superman punching fist, a packing box, evil eyes and a railway carriage.

All of these base game symbols can pay out between 5-500x your bet.

Besides these, there’s Superman as the Wild symbol and his badge as the scatter symbol.

The former substitutes other symbols to form winning paylines while the latter triggers free games. Any wins that constitute of a Wild symbol are multiplied by 2x in the base game, and up to 5x in the free games. 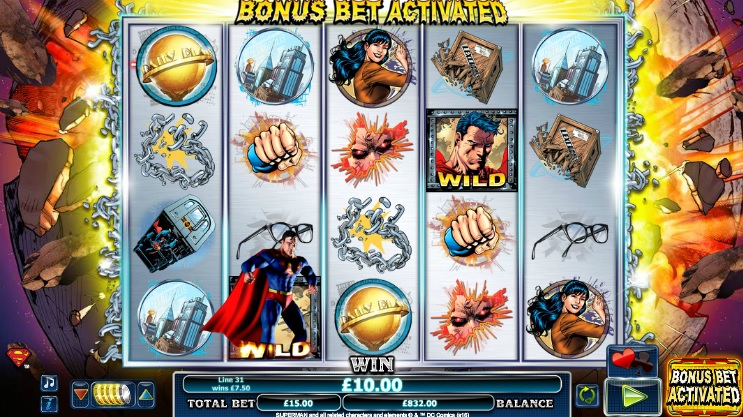 By opting for the Bonus Bet feature, players will enjoy a higher payout percentage and the possibility of triggering the Save the World feature. The benefits are indeed significant and we recommend that you play with Bonus Bet activated if you can.

Bonus Bet is activated by playing 10 extra coins. (That’s 10 times the amount wagered per payline.) The Save the World Feature can only be triggered if the Bonus Bet is active, and when three or more Scatter “S” badges appear on the reels.

You’re in for a ride when this happens. Superman flies through a meteor shower while destroying missiles. Each missile holds a cash prize, so keep cheering on Superman to gather lots of them.

Once Superman reaches Earth, you must help him choose one lead-lined doors to enter. The doors reveal either one of these three: 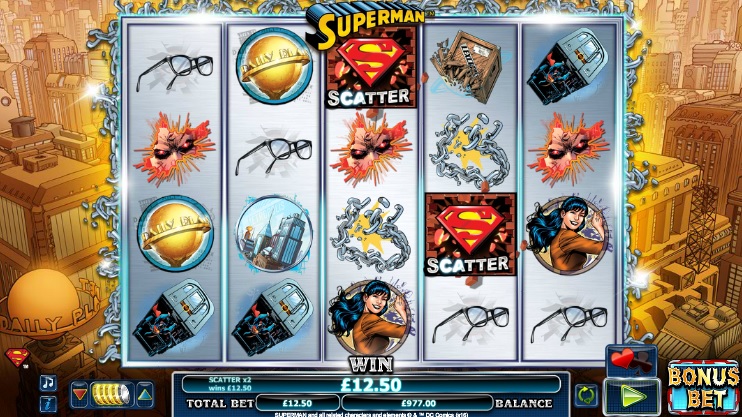 Secondly, there are 10 free spins/free games to be won when Superman appears on Reels 2, 3 and 4. During each free game, an extended Superman Wild will appear on one of the reels. This increases your chances of winning by a fair amount.

On top of that, every win involving a Wild symbol is now multiplied by 5x. 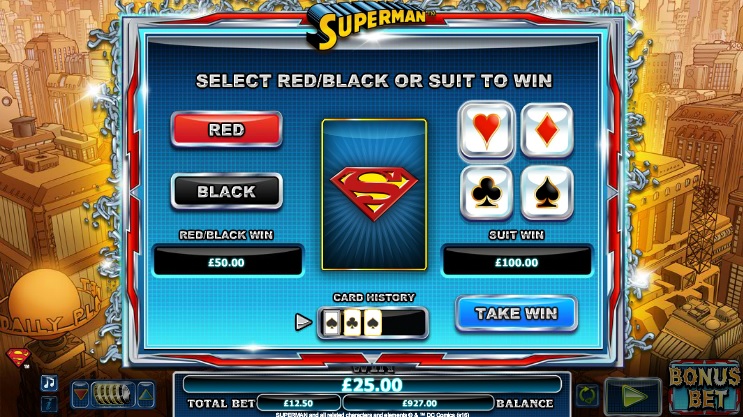 This Superman slot is inspired by the comic book version, rather than Superman the movie. The reels are set against a backdrop of skyscrapers in the Metropolis.

Every symbol is almost lifted off the pages of the comics, such as the artistically drawn Lois Lane and the iconic elements of the Metropolis.

Not to mention, your entire gaming session is accompanied by stunning background music. Comic fans will not be disappointed. 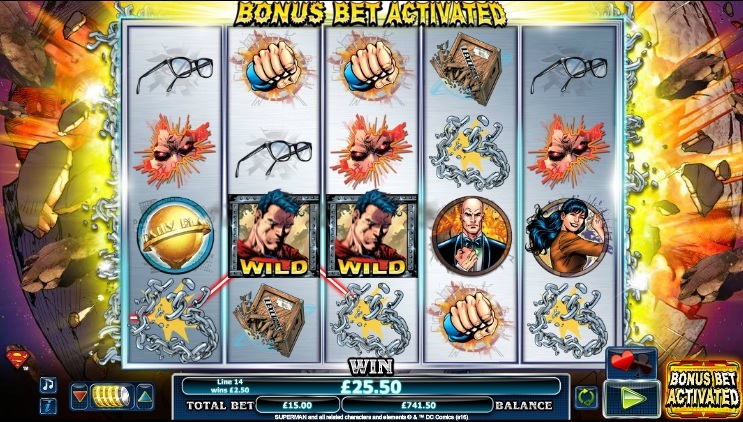 NextGen Gaming produced an entire series of superhero slots. Besides Superman, there’s also The Flash, Green Lantern and Batman; all produced in partnership with DC Comics.

Each slot is remastered with stunning artwork, high-action battle scenes and exciting features. There’s a whole host of comic book- and superhero-themed slots in the slot universe.

Just for comparison, Playtech has also released a slot based on the 1978 Superman the movie. It was created in partnership with Warner Bros. Consumer Products. We don’t mean to be biased, but we think the NextGen Gaming Superman game is the one that’s more fun.

Extended Wilds, cash wins and multipliers… the NextGen version has it all. Anyway, a lot goes into making these branded games – much more than coding and drawing – and are not to be missed. 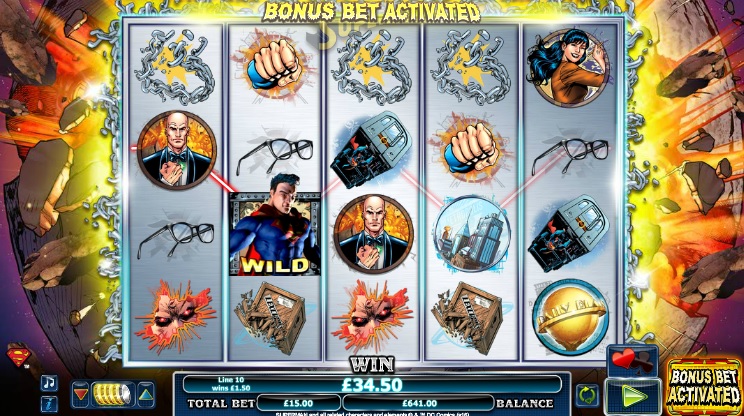 We’d say that the game has mid-to-high variance, so you’ll have to watch your wallet while playing.

There’s huge potential to earn some big money in this slot (especially during the Save the World feature). However, there’s also the possibility of running out of cash before such fortune falls onto you.

Since the minimum bet is 50p (or 60p with the Bonus Bet), it’s not the slot for casual players. There are definitely other online slots out there which are more suitable for those with lower budgets.

Anyway, if you have the cash, Superman is the game to play. It’s packed with exciting and money-making features. While you’re at it, don’t forget to try The Flash and Green Lantern at NextGen casinos too.