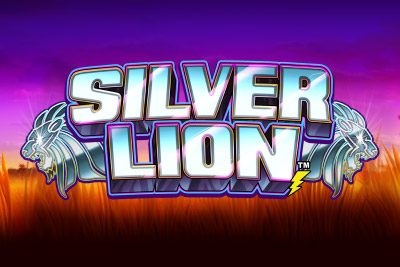 Get ready ladies and gentlemen for one of the best safari trips in the world, the Silver Lion. This time round, we will be heading straight into the heart of the African Savannah, where you will be taken by awe by the most majestic creatures you will see in your life. I’m talking about the King of the Jungle himself, the almighty Silver Lion, hippos, zebras and also some cute little meercats.

What you really want to know is this: Silver Lion sports 1,024 ways to win, and when some luck is applied you may potentially win up to a staggering 33,000x you wager on a single spin. You heard that right, 33,000! That’s pretty much like winning a lottery on a national level. 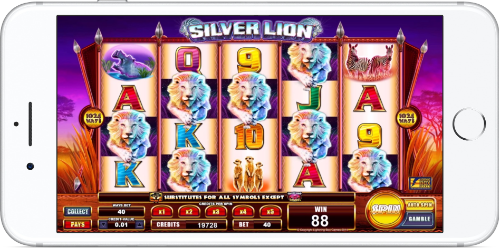 First things first. The Silver Lion mobile slot sports a slightly unconventional 5×4 reel layout that paired to a massive 1,024 ways to win. You may wager anything between 40p to £280 per spin, giving you freedom of using your budget to suit your gameplay.

This game is neutral in betting grounds meaning that it does not produce more winnings when the wagers are higher. That said, both casual players and enthusiasts may have equal fun at the African Safari. 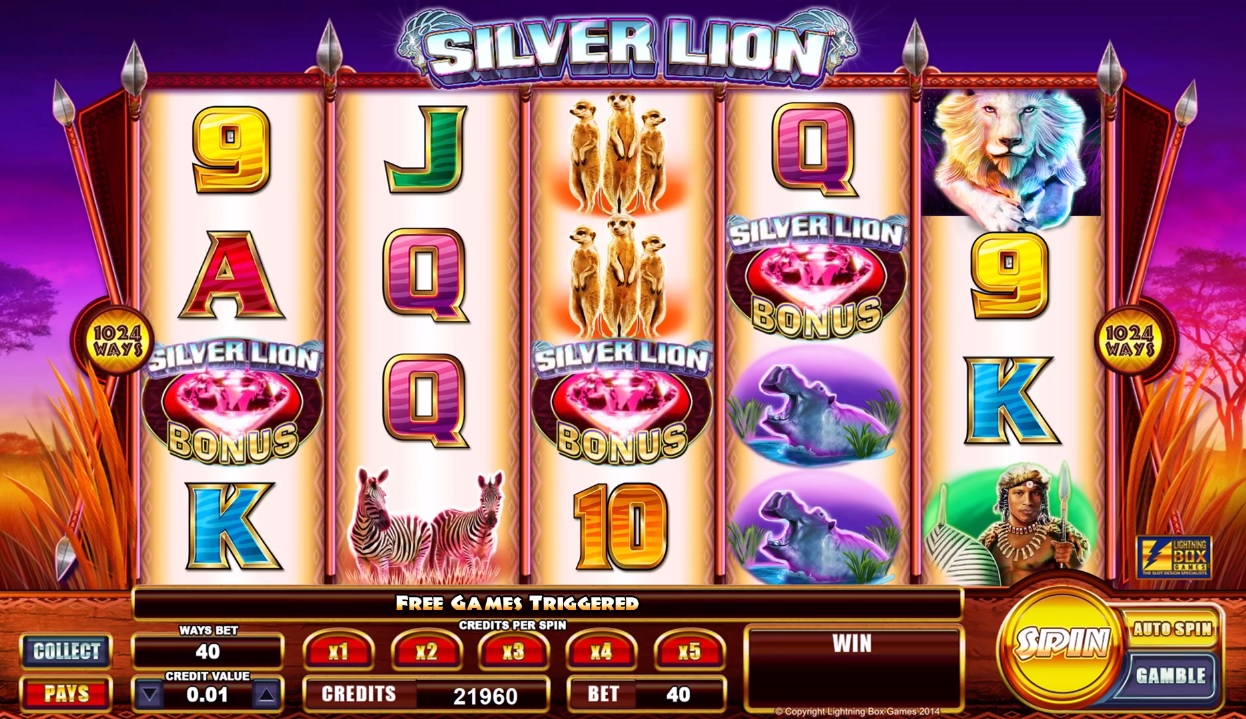 In terms of payouts, everything about it is pretty decent. The payout frequency is a little lower than average, but you do recover back more than what you spent when you trigger some of the bonus features in this game.

From my experience plaything Silver Lion, I would say that this mobile slot leans more towards a medium to high variance slot. For those of you who are more technically inclined, the Return to Player (RTP) rate of this game is 95.3%. 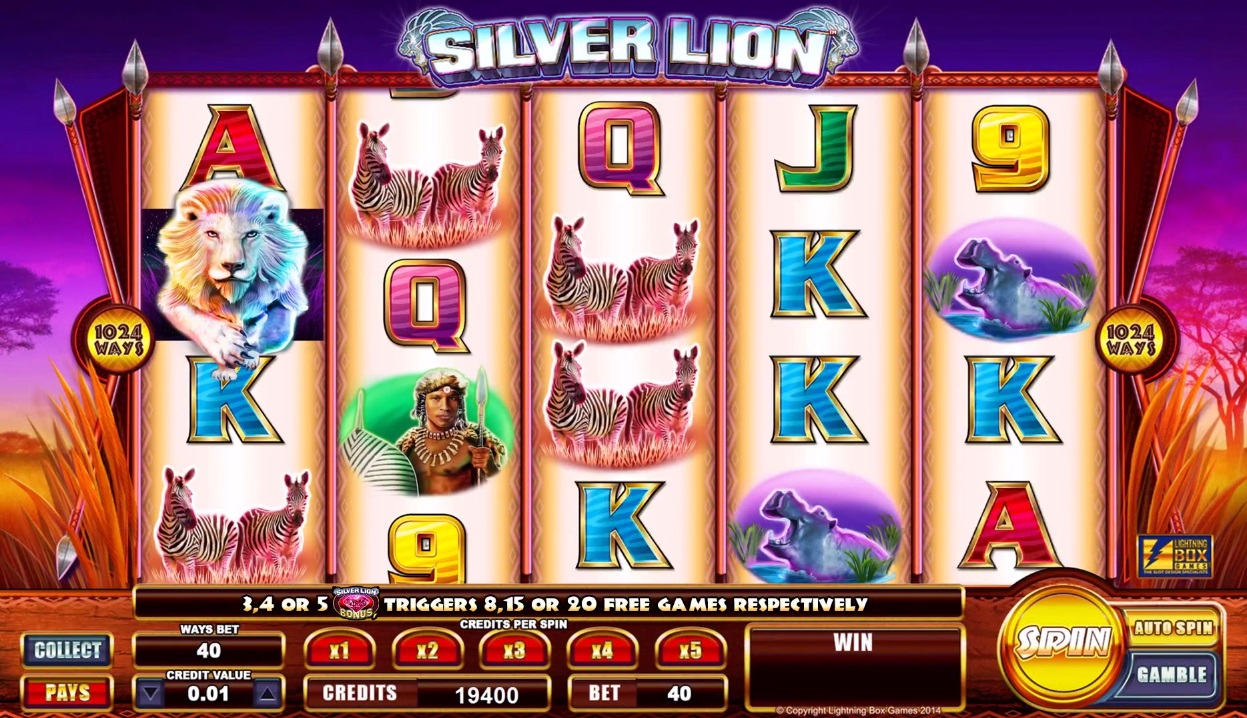 Symbols wise, you will find the standard A-9 cards as symbols, with the additional special ones that comes in the form of wild safari animals and even some tribal characters. As you would have expected, the Silver Lion symbols is the highest paying symbol in the game.

The developers of this game, Lightning Box has stuck to using the same success formula that has been working for the last decade, loads of free spins and win multipliers. At Silver Lion, you will find both, and fortunately, in healthy amounts as well. For you to trigger the free spins feature, you will need at least three scatter symbols to appear anywhere on your reels. 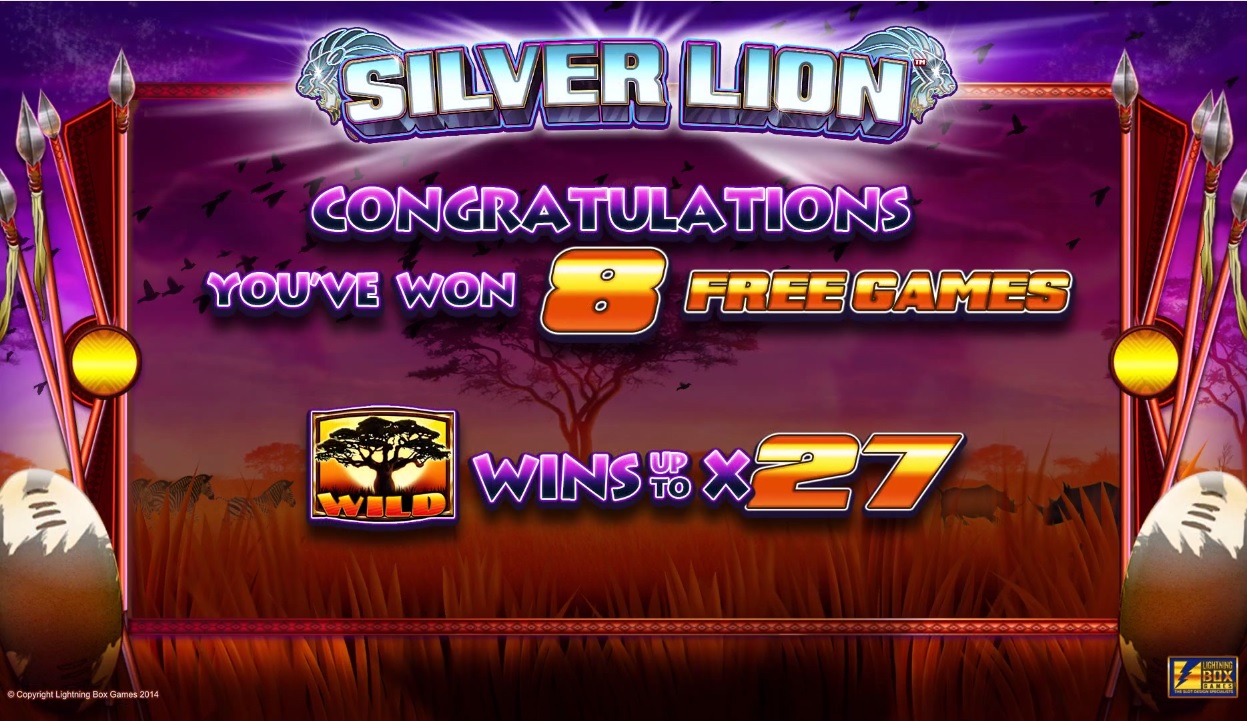 The second and most prominent feature in Silver Lion is the Wilds feature. After all, the whole theme of this slot is set in the African Wilds… Here, the Wilds have two functions instead of the usual one. For starters, they replace other symbols (except the scatter symbols) and complete winning paylines that results in bigger payouts and cash prizes.

Secondly, it comes with win multipliers during free spins. More often than not, it will have a 2x or 3x multiplier attached to it resulting in an instant doubling or tripling of your extra spin wins! 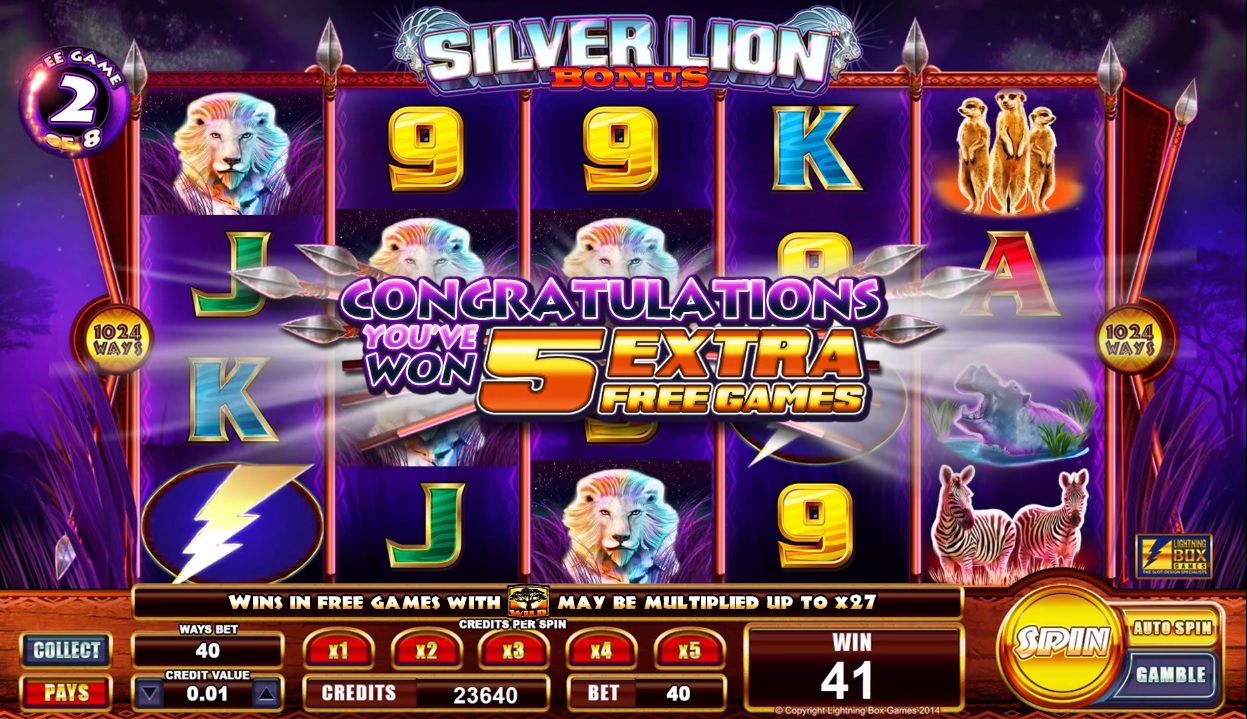 Stunning and solid. That is probably the most accurate representation if the Silver Lion mobile slot I can think of. The graphics are undeniably one of the prettiest that I have seen in a mobile slot.

All the symbols and design elements working perfectly together to make the whole African Savannah backdrop work. Gameplay wise, Silver Lion is as smooth as it can get on both desktop and mobile devices so no complaints whatsoever here. 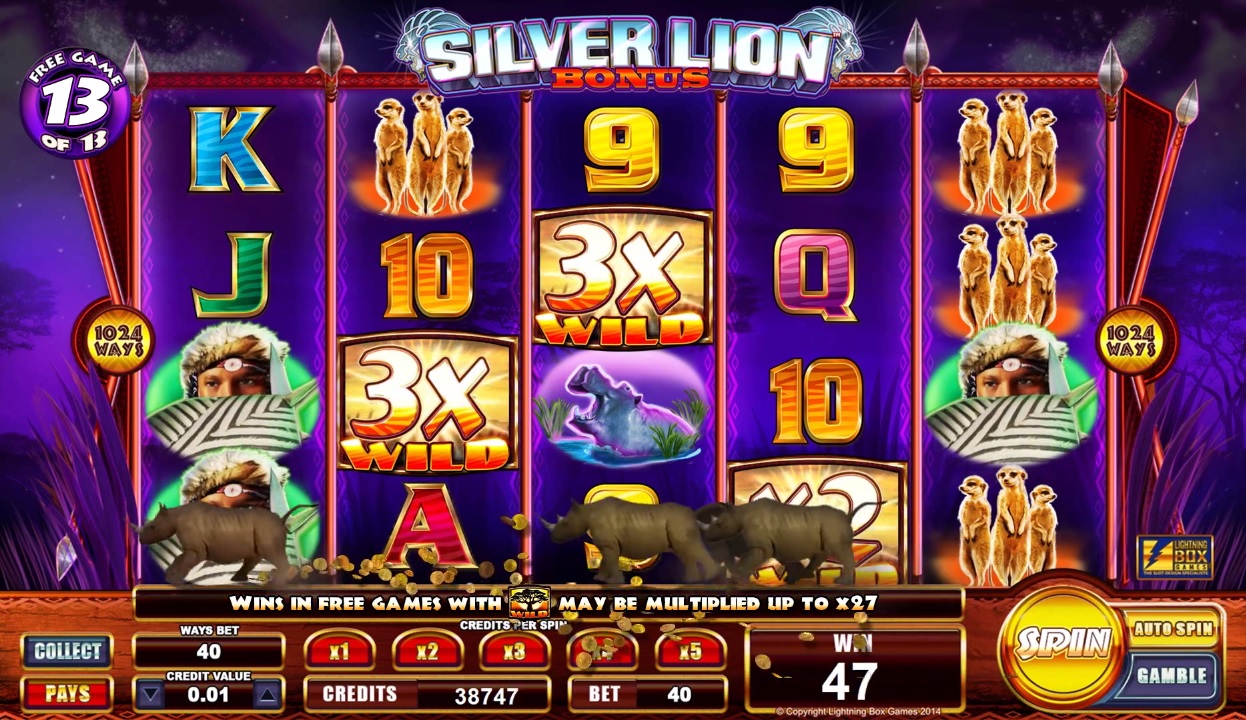 Remember the part where the wild symbols come with win multipliers? Well, turns out they are stackable! Whenever you are lucky enough to find more than one of these wild symbols on your reels, you simply multiply both the multipliers together to get your final multiplier.

For instance, if you find a 2x on your second reel and a 3x on your third reel, the total effective multiplier on your win will be a 6x.

This opens a whole new payout dimension as the number of multipliers that you can get on your reels are unlimited. We did some quick calculations and found out that a multiplier of more than 33,000x is totally possible! 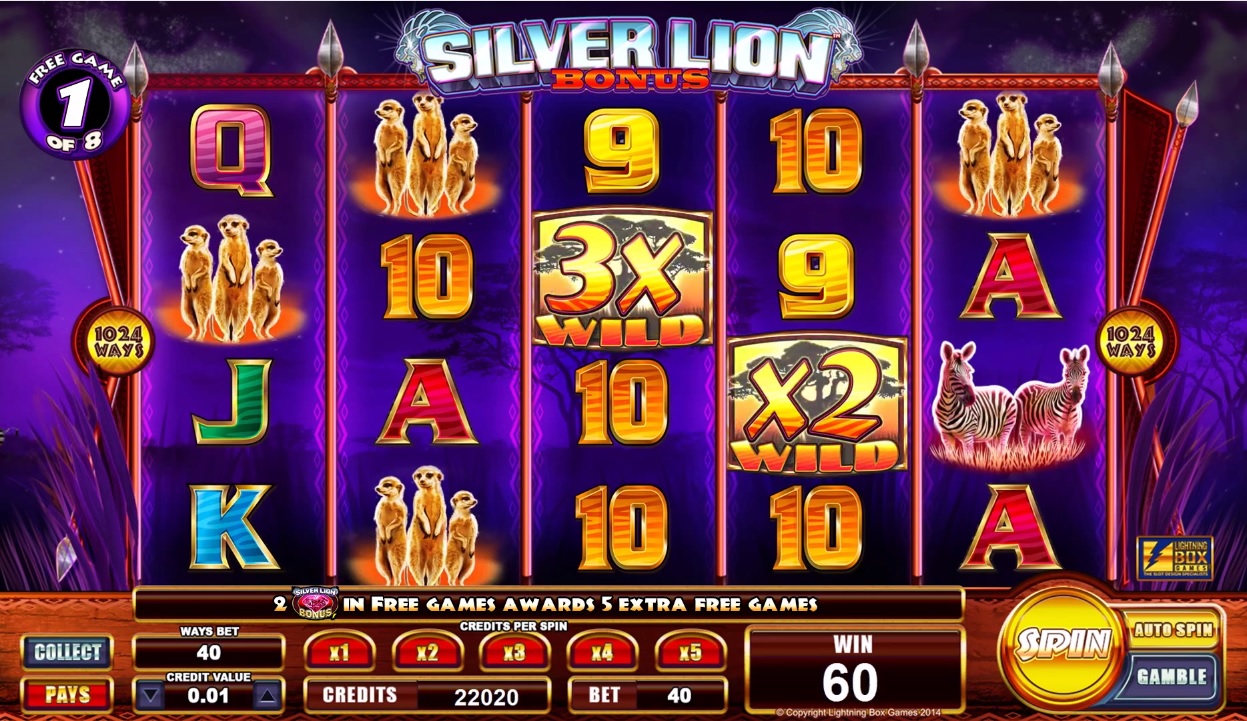 The Silver Lion is an amazing mobile slot, and with its amazing theme, it is going to attract a lot of attention from players. The solid features coupled with the adrenaline-inducing multipliers make this game super exciting to play on top of rewarding its players with handsome payouts.

If there is one thing that Lightning Box can improve on, it would be to add more features in this game. A mini-game would make this game a whole lot more interactive and fun. Regardless, once again, this is a solid game and we hope to see more of Lightning Box’s games in the future.