In the Safari slot from Magnet Gaming, you’ll become a tourist riding a jeep across the African wildlife and looking to photograph some local wild animals. As the scenery of safari change before your eyes, you’ll get many different opportunities to win big cash in the form of big wins and even progressive jackpots.

In this Safari game review, we will tell you all about the different bonuses, features and ways to win two progressive jackpots that other lovers of safari wildlife have been increasing with their bets. It may not be the most visually appealing slot ever created, but it certainly does what a casino game is supposed to do – pay out heaps of money. 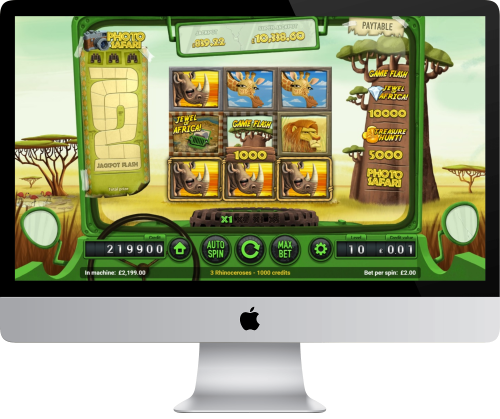 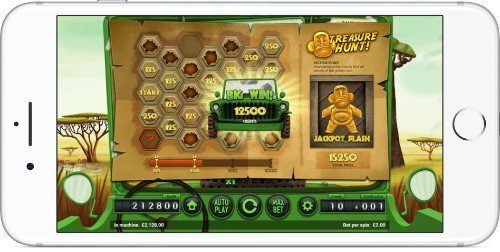 Learning how to play Safari slot is very easy, because the base game only includes 3×3 reels and eight paylines, each of them three-symbols-long. Weirdly enough, the game’s paytable doesn’t list how many paylines there are or how they’re oriented. Judging from our gameplay, there are no zig-zags, but there are oblique lines and even vertical lines in the game.

Safari also features cascading reels feature. Every time you land a combination, the winning symbols will disappear and the ones on top will tumble down. If you win again during a re-spin, the winning will be multiplied by up to 5x, which sometimes brings quite decent wins.

As you can see from the pictures, the symbols in the game mostly feature exotic animals like lions, zebras, giraffes and elephants. There are no wilds in Safari, instead, four different bonus symbols are available, offering different paths to the jackpots.

Safari slot RTP is 97%, which is almost as high as slots go. What’s more impressive is that it’s a high variance slot and it offers progressive jackpots too. Since a small part of every bet goes into these jackpots, such a high return to player is simply phenomenal, because other games in this category have much higher house edges. 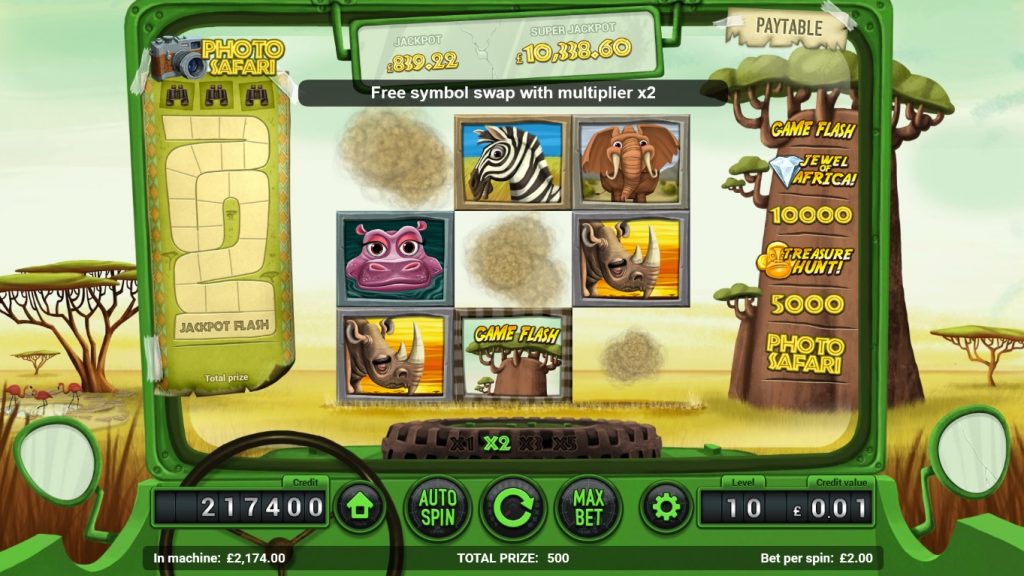 In other words, Safari is probably the easiest high variance jackpot slot to pick up for small budget players. While you probably won’t get far with £10, it doesn’t require huge deposits to get to the high paying bonus rounds either, and if you’re lucky enough to land a few proper base game wins, you might last for a long time with just a medium-sized bankroll.

The best way to win this game is, of course, via bonus features. In this Safari game review, we’ll cover all of them in detail.

For example, landing three ‘Jewel of Africa’ symbols in one payline will trigger the bonus of the same name. In it, you will drive across the whole continent of Africa, collecting gems on the way. While a die roll will decide the distance you’ll cover on every move, it’s up to you to decide which direction to go to and which secret bonus to aim for. Aside from cash prizes, there are multiple ways to win a jackpot game in this bonus round too.

Treasure Hunt is another bonus activated by ‘Treasure Hunt’ symbols. There, you will reveal hidden cash bonuses and golden monkey parts as you travel along a field with buried treasures. The key here is to avoid empty squares because they diminish the cash prizes of the bonus. If you collect all the monkey parts, you get an opportunity to win the super jackpot.

Game chance is a simple bonus that triggers the baobab tree to the right of the reels and selects one of the prizes on it. These include three other bonus games and two cash prizes up to 50x the current bet. 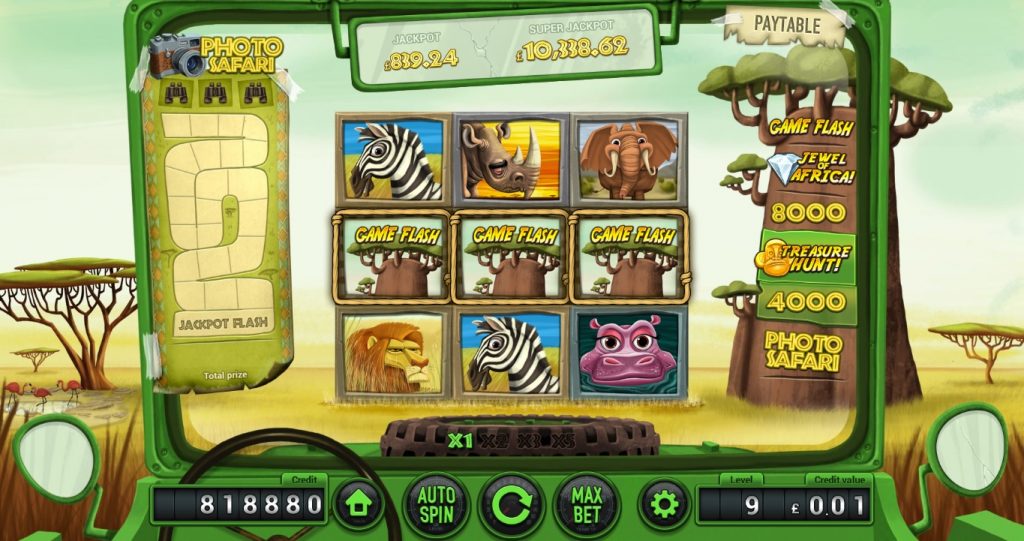 Next up, we’ve got ‘Photo Safari’ bonus. Again, trigger this by landing respective bonus symbols. In this bonus round, you’ll get 25 free spins. On top of that, the middle line of the reels will be where you will take photographs of the animals. For each round, a random animal is selected and you’ve got to collect as many photos of it as possible for cash prizes and yet another chance to win the jackpot.

The two jackpots can be won in numerous ways described above, but the jackpot mini-game itself features nothing but a table with several fields including cash and jackpot prizes. The game then randomly selects one field and awards its prize.

While we didn't  win the jackpot in our playthrough, we did get several chances and came out with amazing prizes anyway. Due to its incredible RTP, we weren’t surprised to have won around 139x our bet in roughly 10 minutes of gameplay, and the bonus round itself took at least a third of that time.

The user interface in Safari slot is easy to use but lacks some more advanced options. You can set the autoplay on, however, it will keep spinning until you turn it off as there’s no option to set a certain amount of auto spins. There’s no fast play option either and the bet size has to be raised step by step, which isn’t the most comfortable way of doing it. 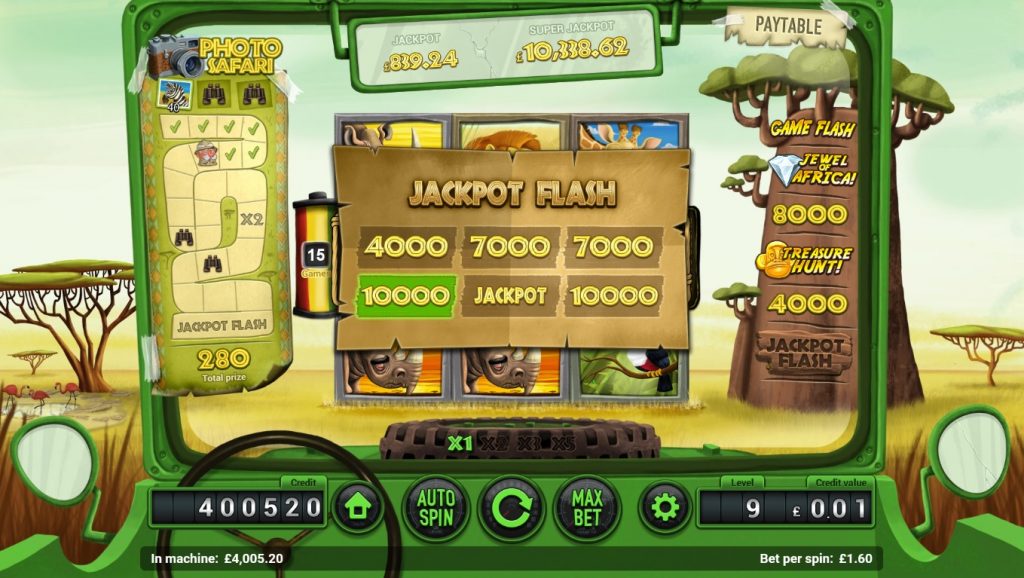 There’s no music in the game, the sound effects aren’t impressive and the graphics are just average. On the other hand, the game runs smoothly and we encountered no problems on any device. That being said, we value this game for its pure winning potential rather than aesthetics or immersion.

Our Take on the Game

Safari slot game doesn’t have an original theme, it looks mediocre and not very exciting. However, that’s just the cover and we shouldn't judge by it exclusively. Looking at the way this game works, we’ve formed a completely different opinion and would recommend it to every player who wants to win big and enjoys high variance slots.

Despite this Magnet Gaming release featuring just three reels, the bonus rounds are all different and interesting, the RTP is huge for a game like that and the opportunity to win two jackpots is viable for every single moment you spend in front of that safari jeep wheel.