Planet of the Apes

Having launched many games designed after famous movies and well-known brands, NetEnt has been resolute in its path to introduce more titles after movie franchises. The latest game to join its portfolio is the Planet of the Apes.

The results of this partnership between NetEnt and the 20th Century Fox has resulted in a game that is packed with bonus features to the brim and potential wins that are as crazy as speaking apes. In Planet of the Apes, NetEnt promises its players wins up to 3,000x their spin wager in a single spin. This slot is not just a game, it is a cinematic experience of its own.

Before we get caught up in the action, let’s quickly get through some game mechanics. Planet of the Apes sports 10 reels and 40 paylines. Yes, you heard that right. The reels here are twice as large compared to many other games and we are loving it.

It’s not just for aesthetics either, NetEnt has designed them in such a way that they allow massive wins. At any point of time, you may win up to 3,000 times your spin wager in the base game alone! Planet of the Apes also boasts an impressive RTP of 96.33%. 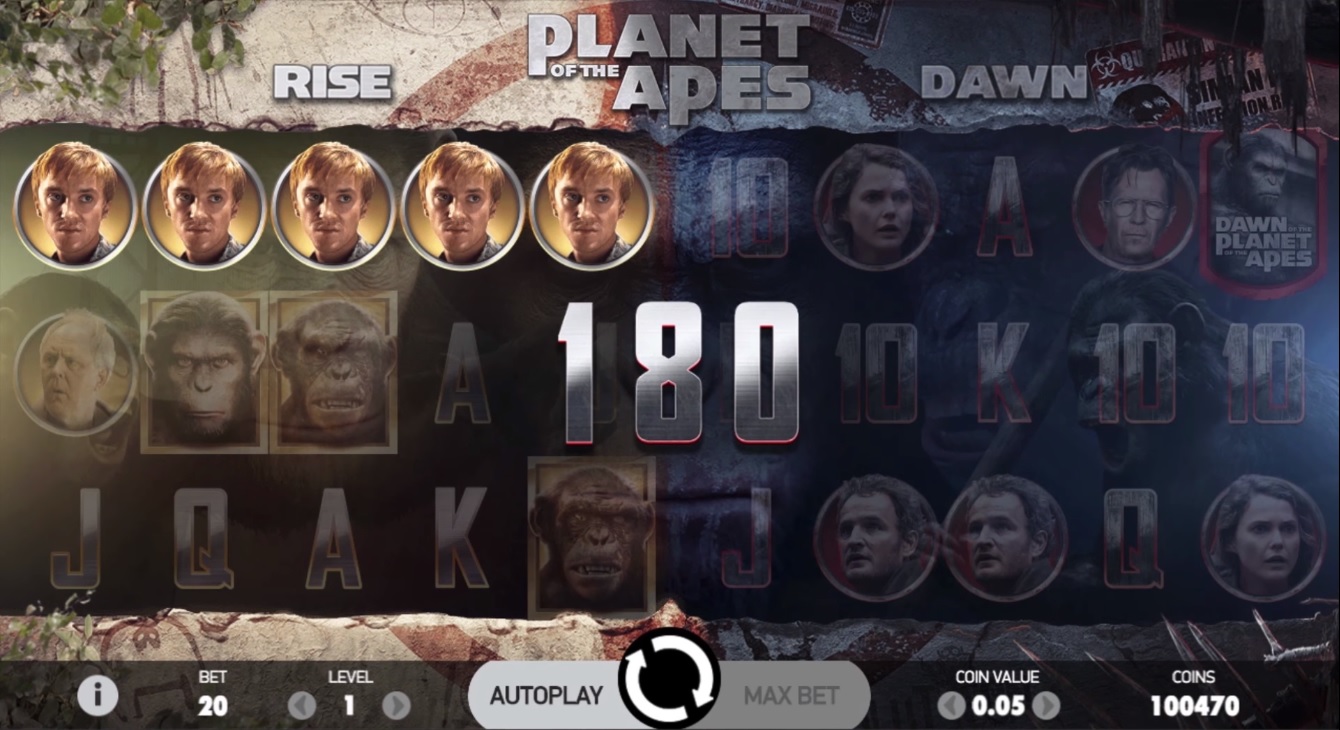 Planet of the Apes slot accepts wagers from anything between 20p to £200 per spin. On your reels you will find all the characters from the movie itself alongside the usual playing cards.

The symbols that you should be looking out for all the time is the Planet of the Apes slot logo as it pays up to 1,000x your spin wager when you get five of them in a winning payline. 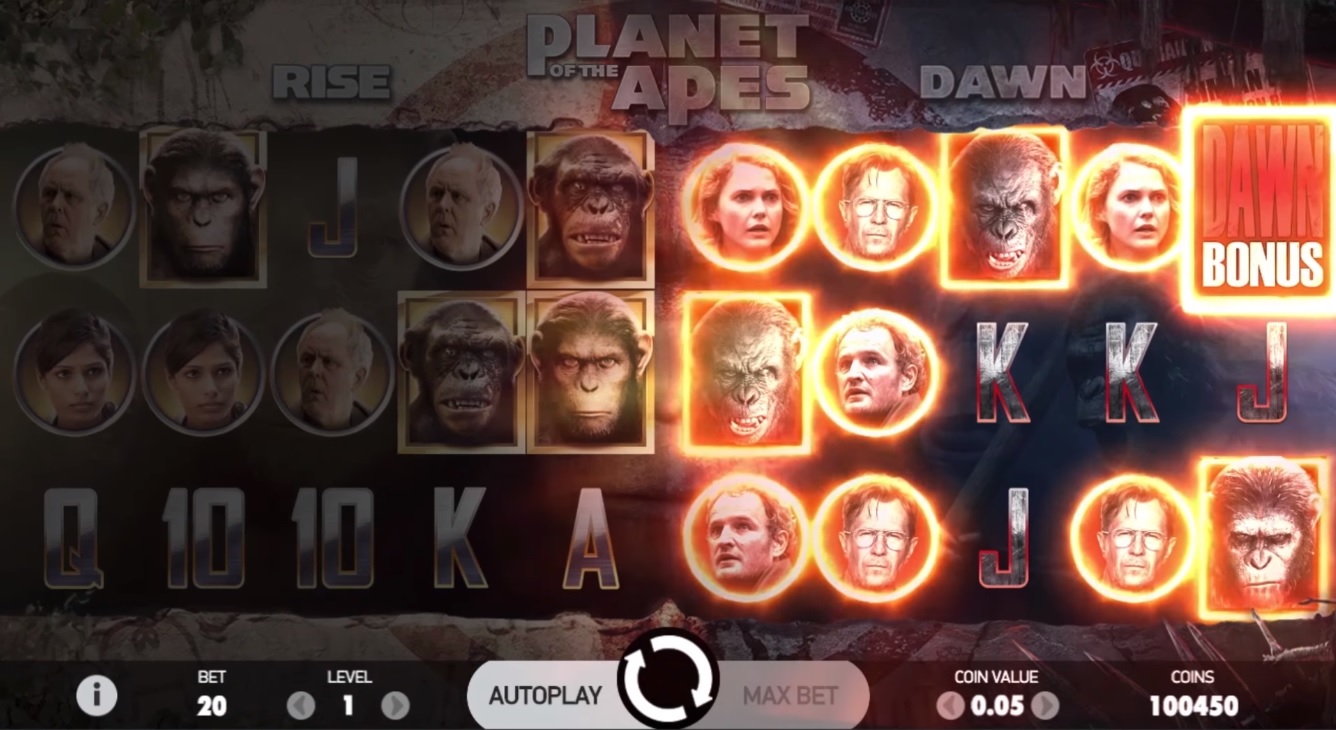 The part that makes this game really attractive is its potential payouts. With a Return to Player (RTP) rate of 96.3% and payouts that are consistent throughout your gaming session, maintaining your bank balance shouldn’t be much of an issue. All you have to do is trigger any one of the bonus features, and you will most likely be walking home with extra cash in your pockets.

We weren’t kidding when we said that the Planet of the Apes slot was packed with bonus features to the brim. In total, this game sports five elaborate features including the Wilds.

Speaking of which, the Wilds come in the form of Caesar’s attic window, and they will replace all other symbols on your reels to complete winning paylines. The best part about the Wilds is that they may come stacked, and when they do, they will replicate themselves on the same spot on your corresponding set of reels. 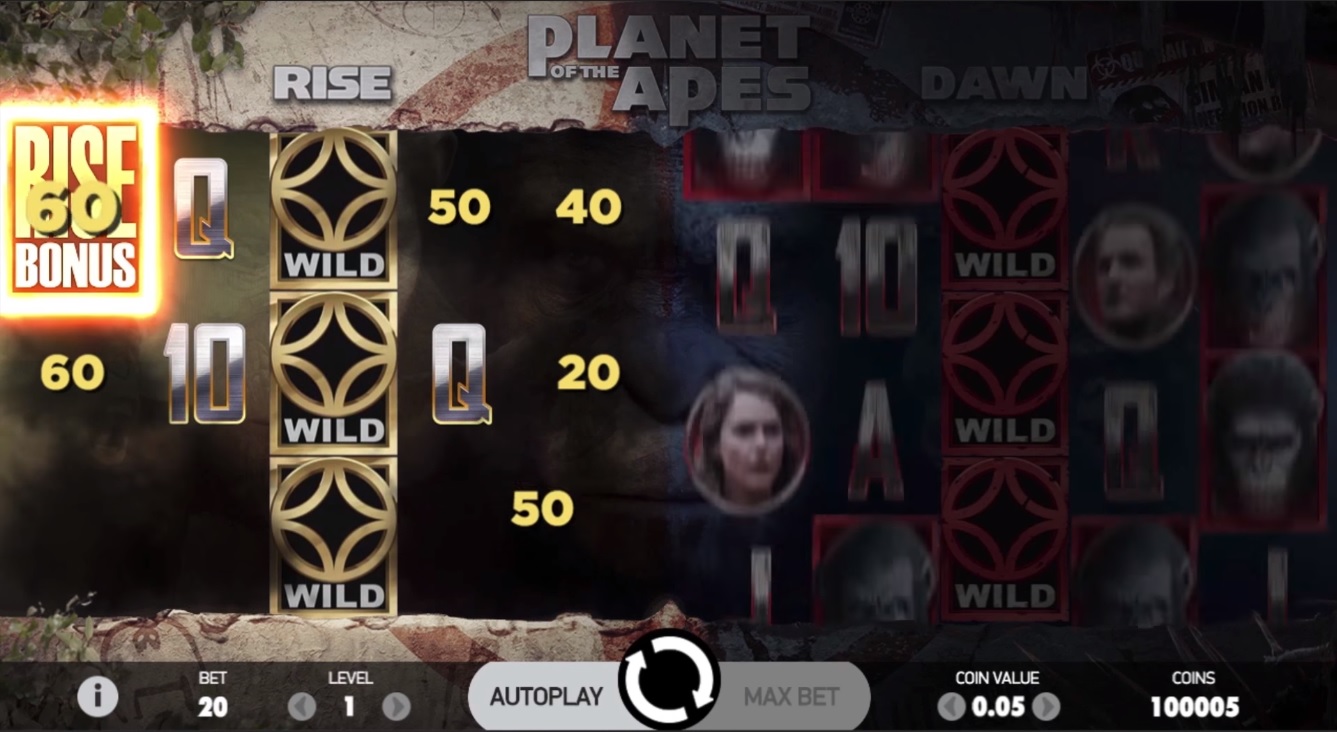 Next up, is the Rise Bonus feature. Whenever you get a Rise bonus symbol on your first reel, you will instantly win cash prizes for all human and ape symbols found on your ‘Rise’ reels.

To complement the ‘Rise’ feature is the ‘Dawn’ feature. When you get the ‘Dawn’ symbol on your tenth reel, all human and ape symbols on your ‘Rise’ side will transform into the same symbols to generate more wins. 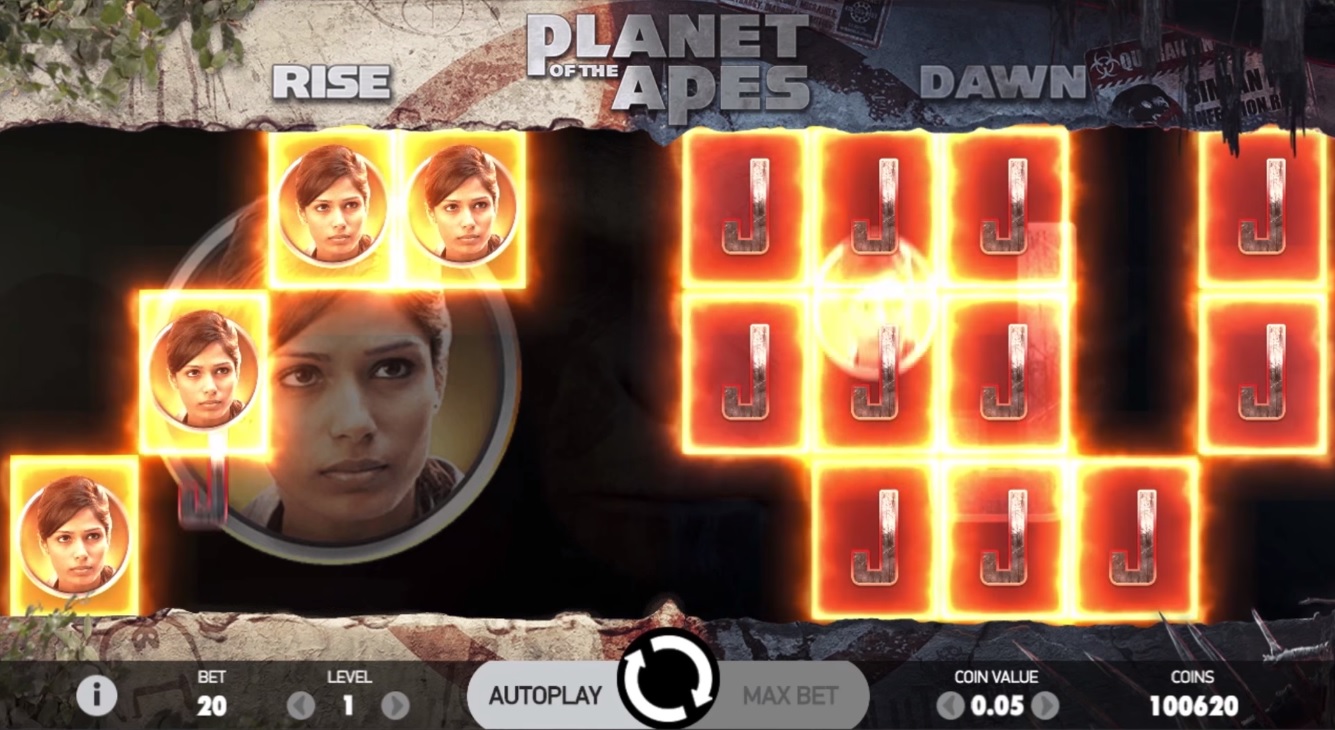 The Dual feature is where things get really exciting. Triggered randomly, one symbol is chose from each side of your reels.

Following that, you will be awarded re-spin after re-spin as long as the same symbols pops up on your reels. The chosen symbol remains sticky throughout this feature. 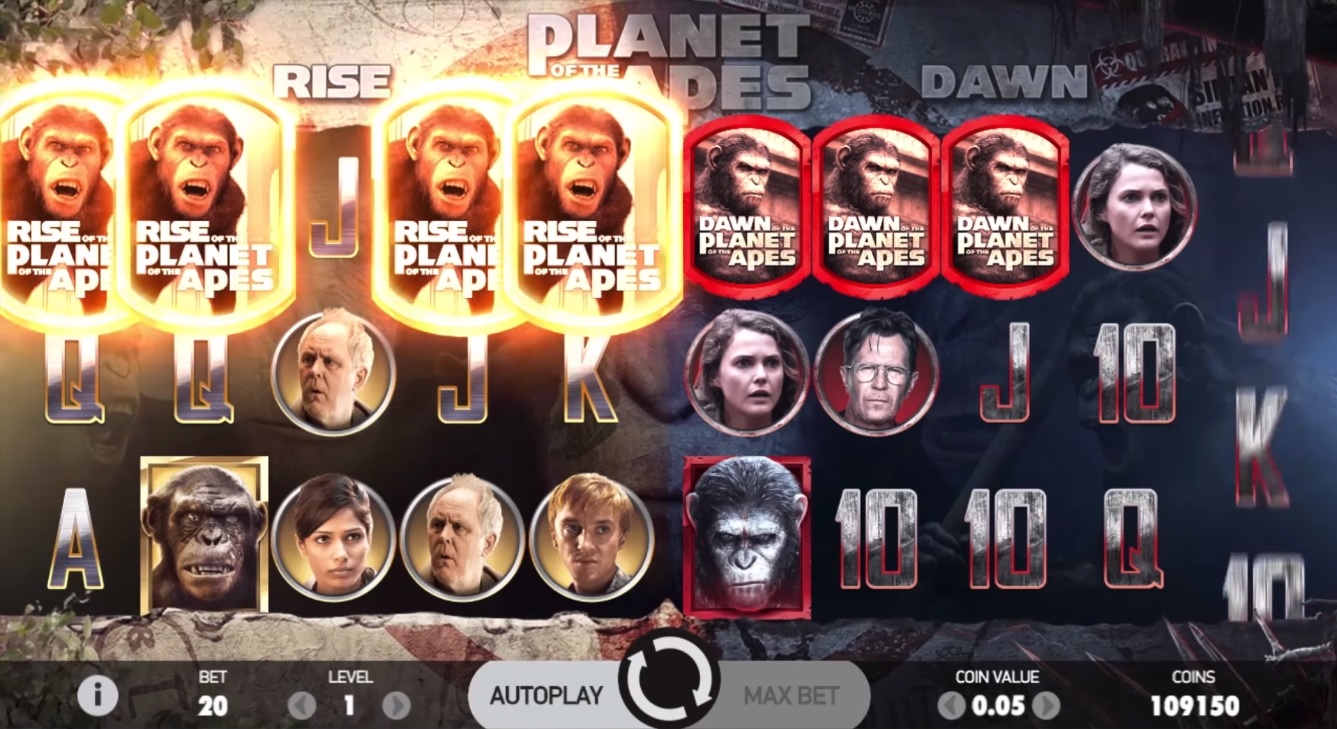 Last but not least, are the free spins bonus feature. Do note that there are two types of scatter symbols for both of the ‘Rise’ and ‘Dawn’ parts of your reels. Getting three or more scatters will trigger the free spins with unique characteristics. The details are as follows:

Truth be told, we were initially skeptical about how all ten reels were going to fit on devices with smaller screens. One thing for sure, NetEnt has mastered the art of utilizing space on screen efficiently.

All the visual elements are clearly visible even on the smallest of screens and gaming experience has not been affected by the slightest bit. Each and every character and creature has been presented in intricate detail to say the least. Every minute playing Planet of the Apes was fully immersive and fun. 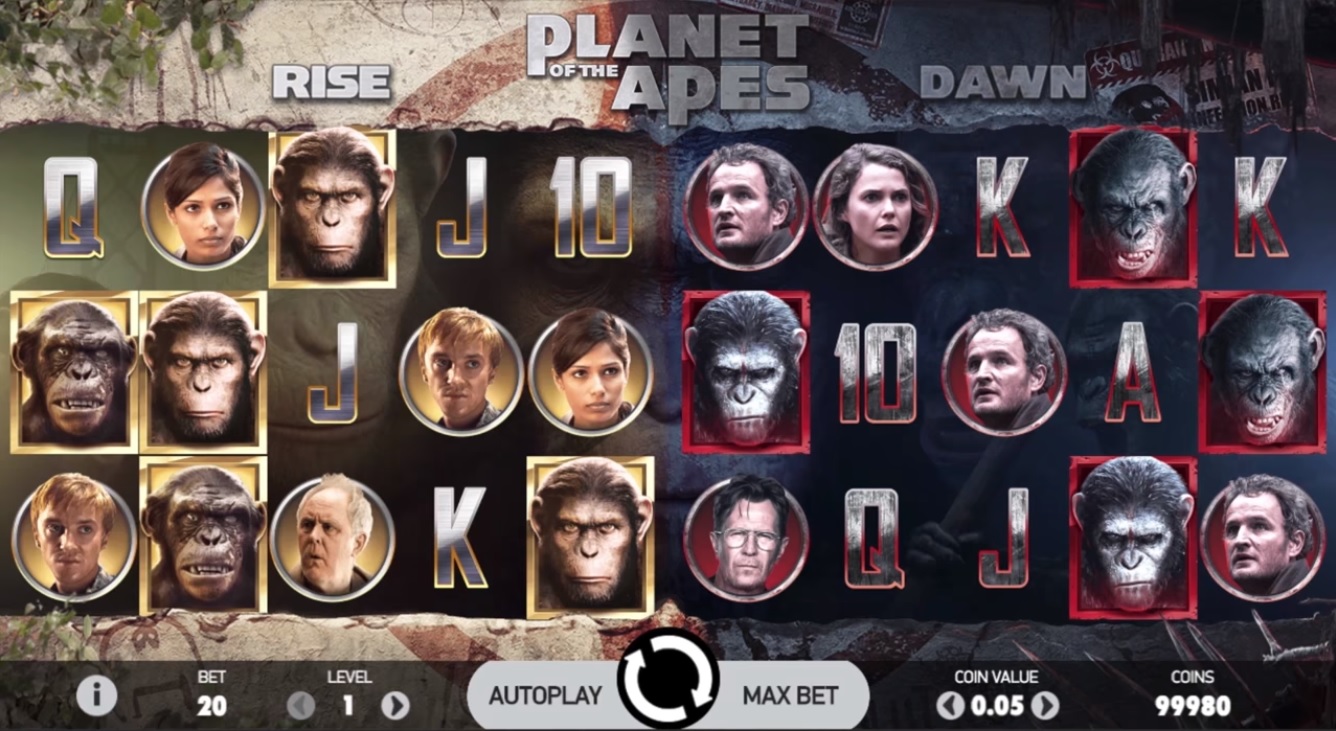 Planet of the Apes by NetEnt is an absolute blast to play whether or not you are a fan of the Planet of the Apes movie franchise. This action packed slot features a good mix of short term and long term gratification through its bonus features.

The ‘Rise’ and ‘Dawn’ features will keep you on the edge of your seats with sudden wins and the free spins may reward you with crazy amounts of money every time they are triggered. What’s not to like about this game?!