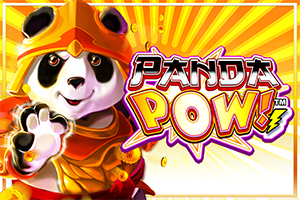 There is no denying that Lightning Box Games have outdone themselves with the newly released Panda Pow mobile slot. It's mobile slot that is overflowing with fun, and no matter how long you play it, you will never get bored.

As the title of the slot suggests, the star character in this mobile slot is a Panda. Don’t be fooled though – as cute as the Panda is, he packs quite a bit of punch in him. Whenever he chooses to unleash the ‘kung-fu’ within, he will be dishing out wins of up to 1,000x you bet in a single spin!

Panda Pow is a 5 reel slot paired with a fixed 25 paylines, and an RTP of 95.51%. Players will be glad to know that Panda Pow accepts a large range of bets starting from a mere 25p all the way up to a staggering £1,000 per spin.

Like many other Lightning Box Games, you can adjust your wager according to your budget by tapping on the up and down arrows beside the coin at the bottom of your reels. Autoplay functions are also available with the usual win and loss limits, making it more convenient for players to multitask while playing Panda Pow. 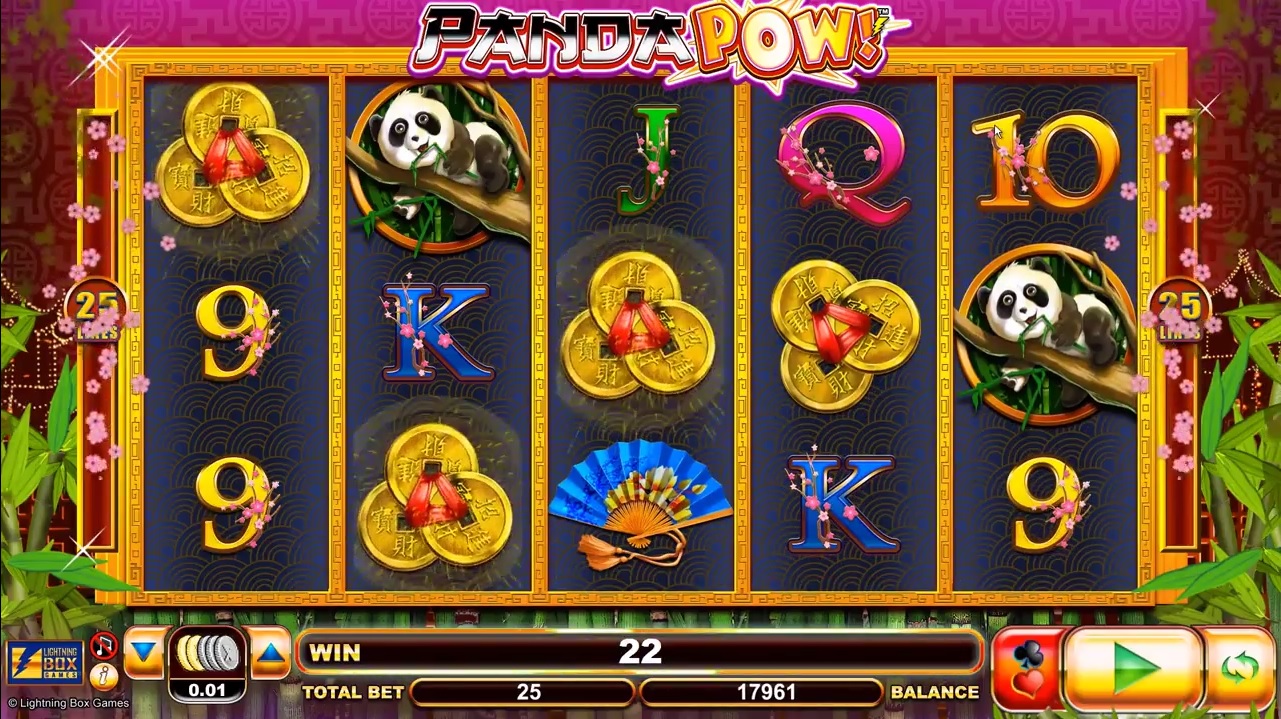 Judging by the size of wins and the frequency, we can confidently say that Panda Pow is a medium volatility mobile slot. Wins in the base game can range from anything between 1x to 15x your spin wager.

The big wins that results in wins north of 50x your wager usually comes from triggering the bonus features in this game, so keep an eye out for them. 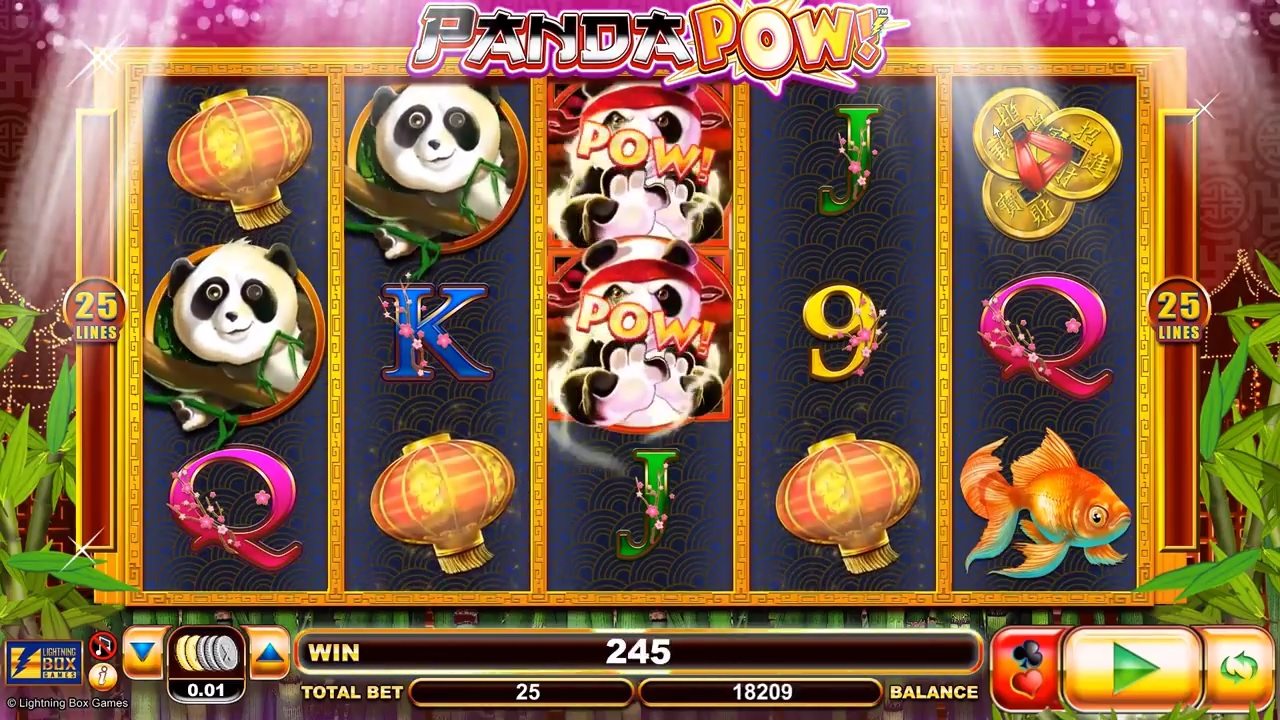 Winnings aside, you will be thoroughly entertained by the oriental themed kung-fu fighting panda mobile slot. All the symbols in this game have some Chinese elements in them, prominently in the fonts and the backdrop of your reels.

The panda symbol is the highest paying symbol in this game and if you are one of the lucky punters, you may potentially be going home with up to 1,000x your spin wager.

This game is all about free spins. Nothing less, nothing more. Good thing is, Lightning Box Games did not hold back in this feature either.

To trigger it, you will need at least five of the Gold Panda bonus symbols anywhere on your reels. The more Wilds you get, the higher the number of free spins that you can win. The details are as follows: 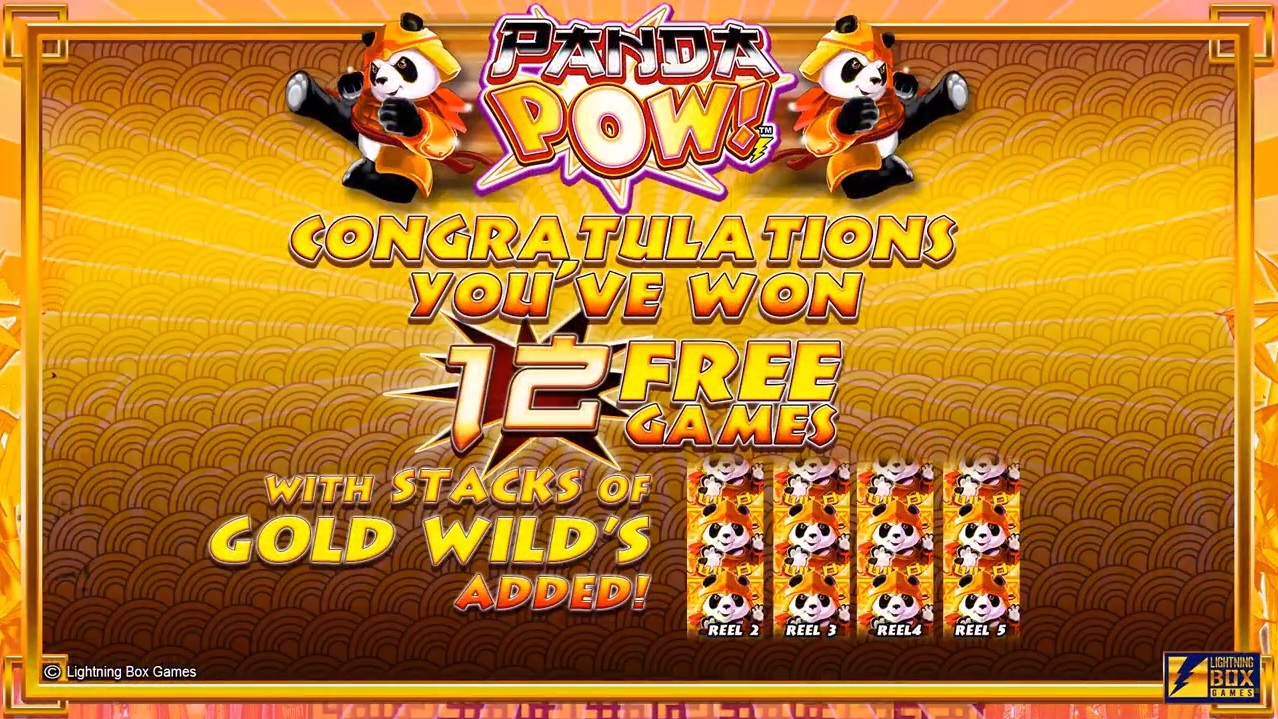 The good news don’t stop there either. In Panda Pow, the developers have made it possible such that you can win additional free spins during the extra spin rounds. Theoretically, there really isn’t a limit to how many free spins you can win at any time. 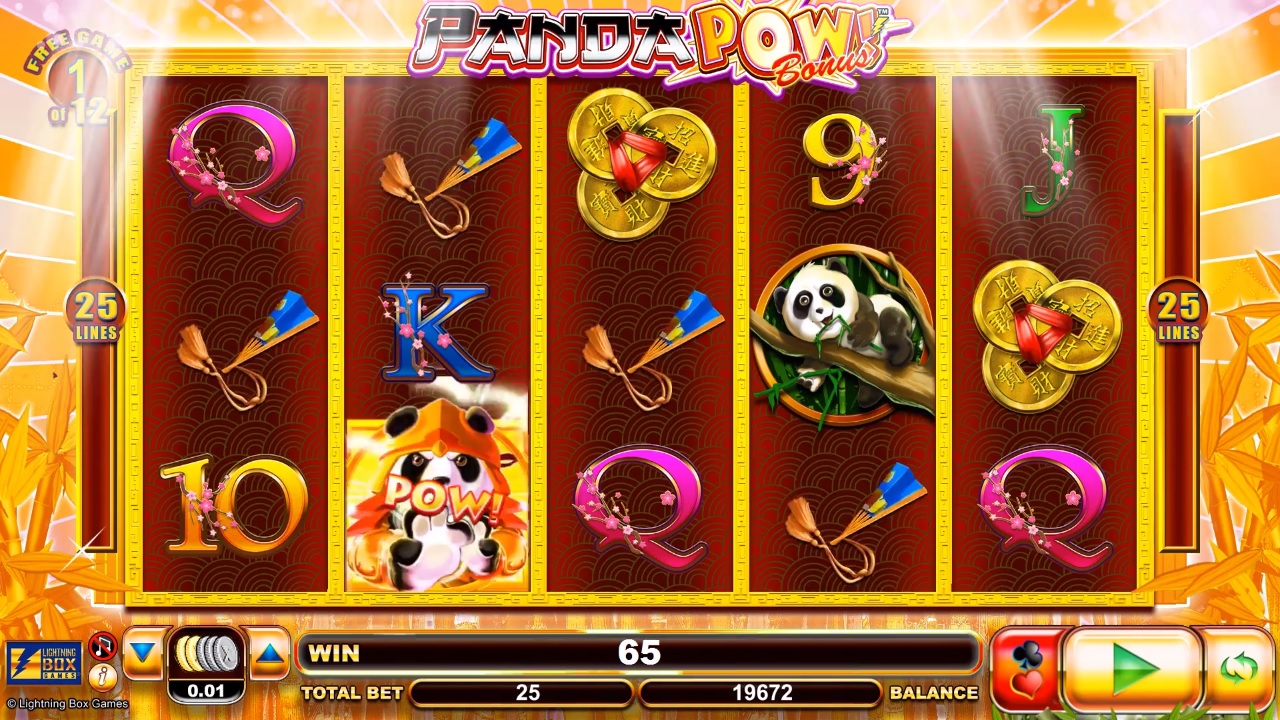 Then, there are the usual Wilds in Panda Pow. In this slot, they come in the form of a Red Panda symbol and the Wilds may replace all other symbols to form winning paylines. Do note that they will only appear on your second, third and fourth reel.

Even though we haven’t seen much of Lightning Box Games lately, they have definitely proven themselves with the release of Panda Pow. Throughout our long session of testing this slot, it has functioned excellently with no hints of lag even on mobile devices.

The graphics and the animations in Panda Pow have all been beautifully designed, and in our opinion, is one of the reasons why this game has gathered a massive following of players in such a short while. The user interface has also been meticulously tweaked to ensure that this game is as easy to play on mobile devices as it is on PC’s. 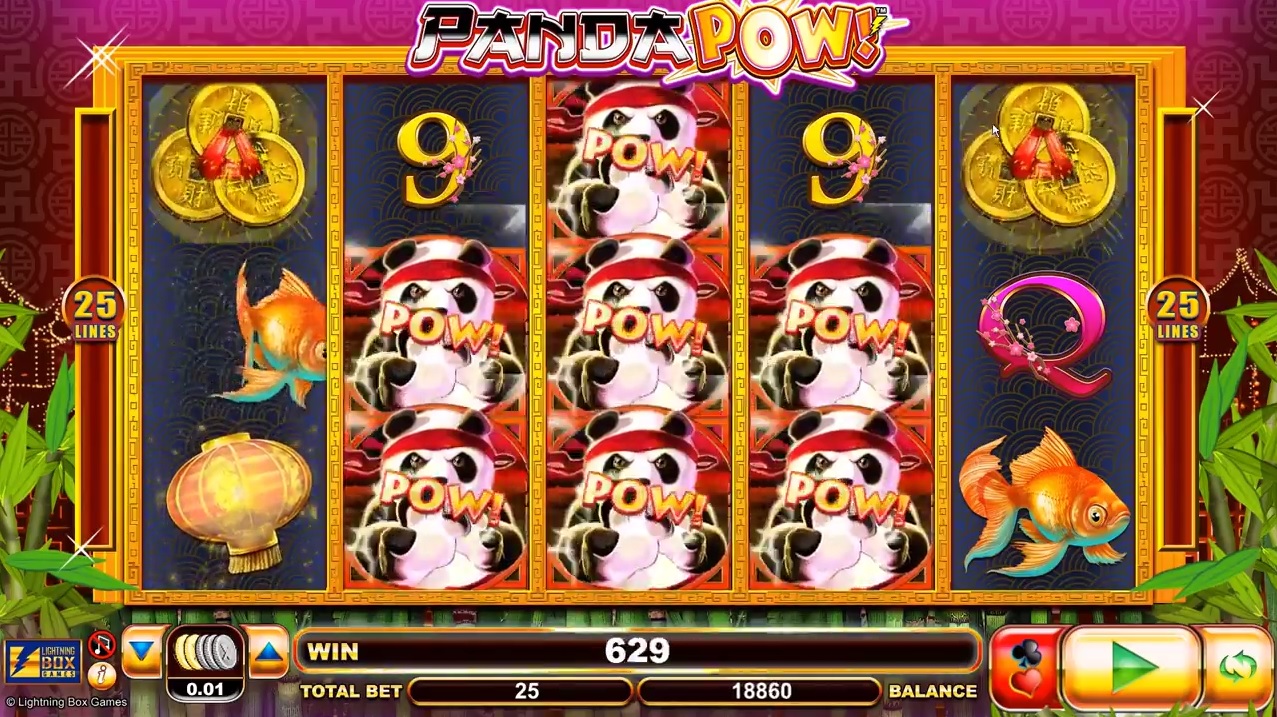 The recipe that has made Panda Pow successful has two key ingredients, first being the sheer number of free spins offered and the second being the stunning visuals all around this slot.

For starters, you will be glad to know that triggering the free spins in Panda Pow is not very difficult to begin with. From our experience, we consistently activated this feature every 20 or so spins.

Compounded with the fact that you can win free spins while playing them, suddenly players are offered with a value proposition that is twice as attractive.

Then, there are the graphics. If you didn’t know that Panda Pow was a slot game, you would have thought that this was an animation movie made by a major studio. Need we say more? 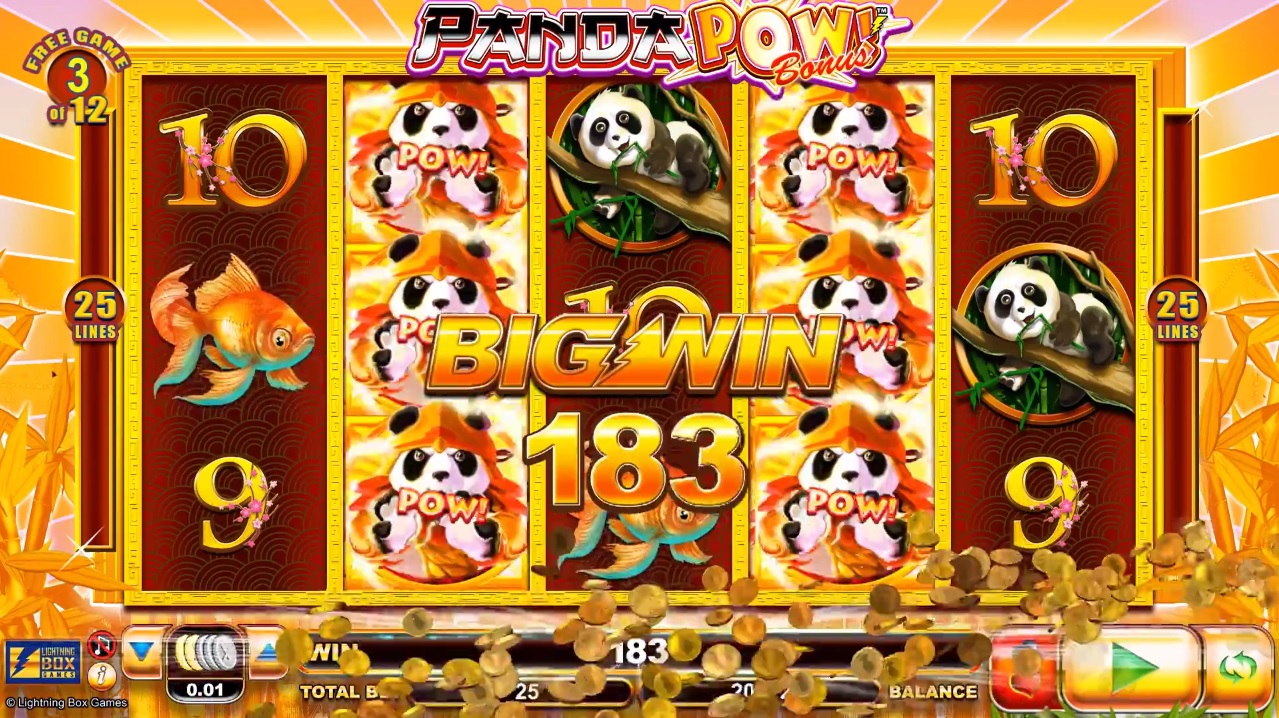 With the release of the Panda Pow slot, it’s time for the community to pay more attention to Lightning Box Games. Not only are the reels stunning to look at and play, but they also pack quite a bit of punch in all of its bonus features. In our opinion, the visual and animations artists have left a mark in the slot world with this game.

Even in this age and time, it is rare for a slot developer to release a game that can rival the likes of Disney and other major animation studios in the world. For now, we’d suggest you snuggling up on your couch and joining Mr Panda in his kung-fu adventures!