Blueprint Gaming have innovated beyond what was thought as impossible before this. Kingdom of Wealth mobile slot literally has multiple slot games in it.

The concept of this slot-ception of a game just blows our minds the more we think about it. At this point, it can’t get any better for both casual slot players and slot enthusiasts like us. What a time to be alive in!

PLAY THIS SLOT AT GALA CASINO

The gameplay department is where Kingdom of Wealth mobile slot truly stands out. Whilst it does sport a standard reel layout, it also has a total of four different sets of reels on the same screen. Wait, what?!

Well, it’s not as complicated as it seems to be. And no, you will not be playing on all four different reels at the same time. This layout is part of their bonus feature. Hold your horse now, we will go through that in a bit in the features section. 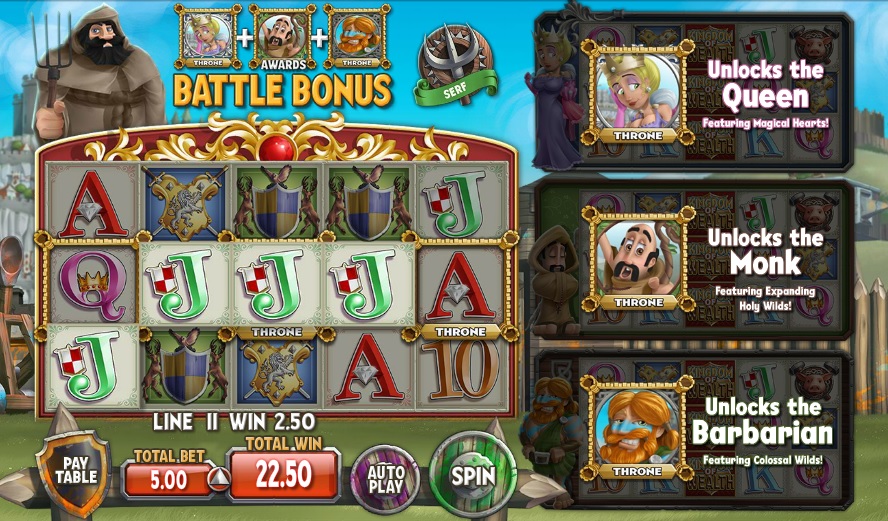 The game itself includes 10 basic symbols. The highest paying ones are the Kingdom of Wealth Symbol and the Gauntlet Symbol that is coincidentally also a Wild. Both pay up to a staggering 1,000X your wager if you are lucky enough to get 5 of them on a payline.

As you may have guessed, the main attraction of Kingdom of Wealth mobile slot is the obvious four sets of reels on your screen. That is known as the Throne feature.

In the base game, it is positioned in the middle of reels one, three and five. You will instantly recognize it via a golden frame.

It works simpler than it seems at first. When you get any of the queen, monk or barbarian symbols on your main reels, you will trigger their respective mini-games on the secondary reels. All three characters own one secondary reel each. 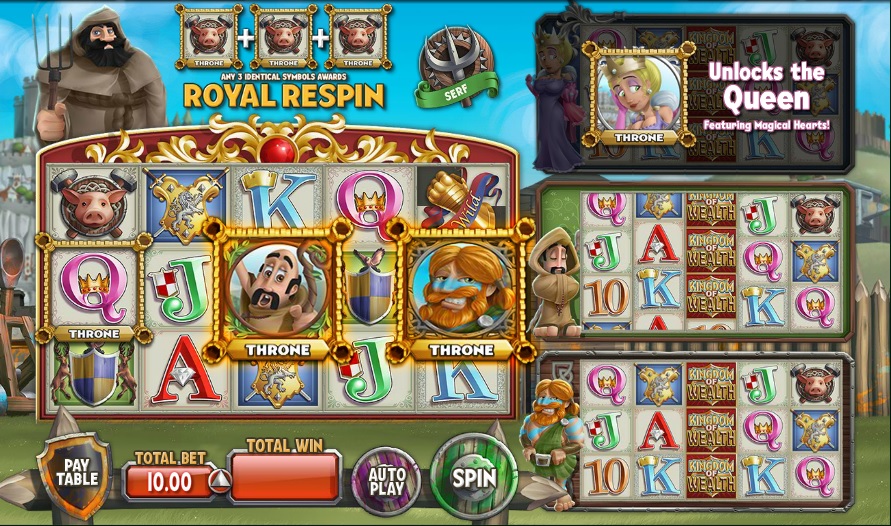 Here is a list of the three secondary reels and how the characters will help you earn some cold hard cash: 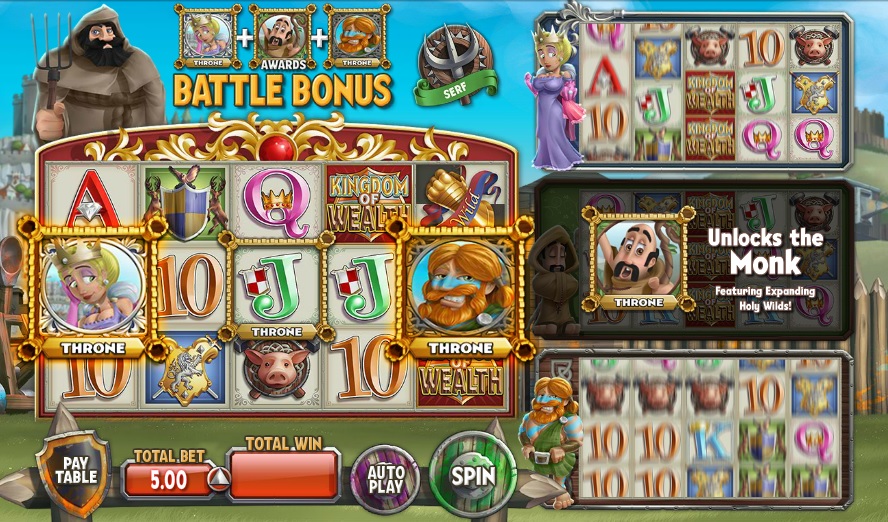 Oh, in the event that you are super lucky and get all three characters in the respective reels simultaneously, you will activate the Battle Bonus feature. Once done, you will be able to pick shields that reveal prizes.

Anything short of perfect in this day and age will definitely do damage to both the reputation of the game and the developer. Blueprint Gaming seem to know this and given that they are not giant developers their margin for error is really slim.

Fortunately, they have nailed this game in every aspect that we can think of. If they can continue producing quality games like this, we're positive that they'll soon be contending with the best of slot developers in the world.

What's Great About The Kingdom of Wealth Mobile Slot?

Besides all the star features with the four different reels in this game, the badges feature in this game is equally innovative. In Kingdom of Wealth you start with a “Serf” badge and as you play you will progress in your rank.

These badges can only be unlocked in order and to do so, you will have to complete various tasks.

These task range from anything between winning five consecutive spins to achieving a gallant win from the Queen. This video game like feature is really appropriate for this type of slots as it brings out the theme really well. 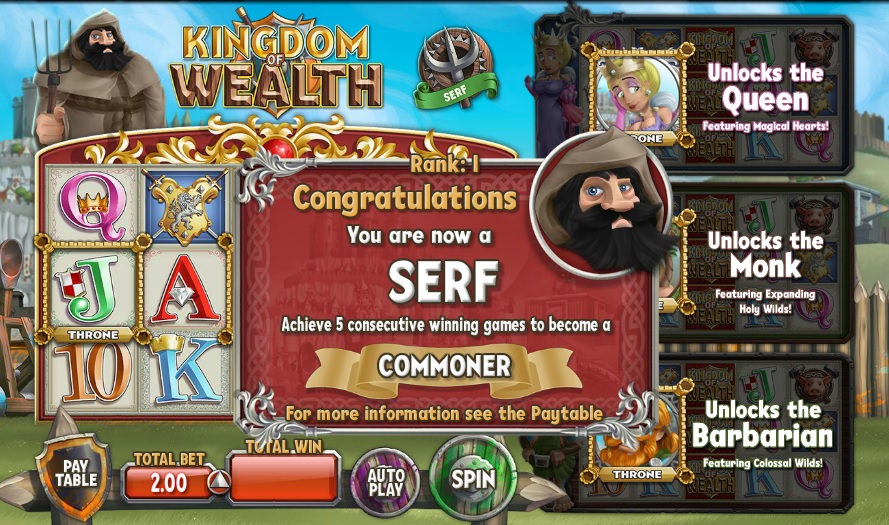 Where to Play Kingdom of Wealth Slot?

As good as this game gets, it's very difficult to find at the UK's gambling sites today. That is very unfortunate, but we have found a Blueprint casino that still offers it for real play to this day.

Gala casino is a famous name in the UK and it delivers some quality content for mobile punters. With over 400 game titles, multiple bonuses and 24/7 support, this site will raise your gambling expectations to new heights.

It accepts PayPal and many other payment methods. Those will help you get a hassle-free experience while you play rare but wonderful slots like the Kingdom of Wealth.

FIND THE GAME AT GALA NOW

The Middle Age era has always been fun in games and movies. With Kingdom of Wealth, we get to relive those times once again. The Queen, the Monk and the Barbarian will ensure that you have a blast of a time with the rewards that they throw your way.

Guess what, they do that pretty frequently too! With the features packed in this game, it is absolutely possible that this game may just live up to its name.