Playing the Jungle Jackpots – Mowgli’s Wild Adventure feels like you're reading a fairy tale from an enchanted storybook. In fact, Blueprint Gaming took the whole idea of playing a slot from a story book way more seriously and laid the whole reels out on what looks like an ancient fairy tale story book.

What’s more is that the developers in this game have maintained the original storyline from the Jungle Book. Each feature has been designed and engineered from ground up to ensure that the characters of Mowgli and his friends shine as it did in the real story. Frankly, this is as good as a slot game that is based on a real fairy tale can get!

Jungle Jackpots – Mowgli’s Wild Adventure is a five reel slot that is mated with 20 fixed paylines. All the options that govern your wager size and autoplay functions are at the bottom of your reels. One nice touch by Blueprint Gaming is that the autoplay function comes with loss and win limits. Depending on the option that you have chosen the game will halt gameplay when you have loss or won a certain amount of money.

The minimum wager that the game accepts is a mere 20p and you may up your bets all the way to a massive £500. With this huge range, this game will suit both casual players and enthusiasts with different budget allocations and gaming strategies. Return to Player (RTP) rate in this game is around the industry average at 95.6%.

You will be glad to hear that a lot of symbols in this game payout highly. Getting five fruit bowl and Wild Footprints symbols on your reels will give you 300x and 500x your spin wager respectively! Mowgli and his friends have more tricks up their sleeves too, with three different Wild symbols being available in this game.

All Wilds may replace all other symbols to complete winning paylines and catapult your bank balance upwards and onwards. There is also another feature called Monkey Mischief, where a whole bunch of monkeys show up and pull to reveal tons of Stacked symbols. 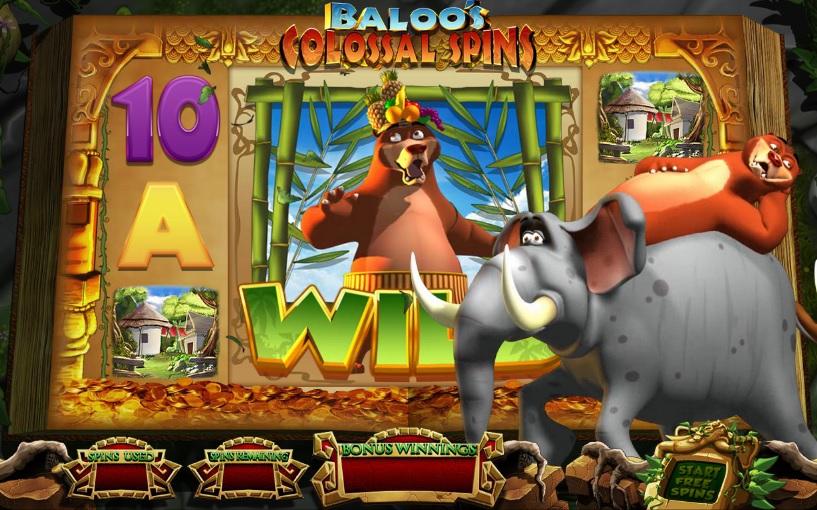 Here is a detailed overview of all the available Wild symbols:

To my surprise, there are plenty of bonus features in Jungle Jackpots – Mowgli’s Wild Adventure, four of them in particular. All of them revolve around each of the main characters namely Mowgli, Baloo, Hathi and Kaa. Baloo steals the limelight here for a bit with two unique features. Here are the details of all the available bonus features from each character. 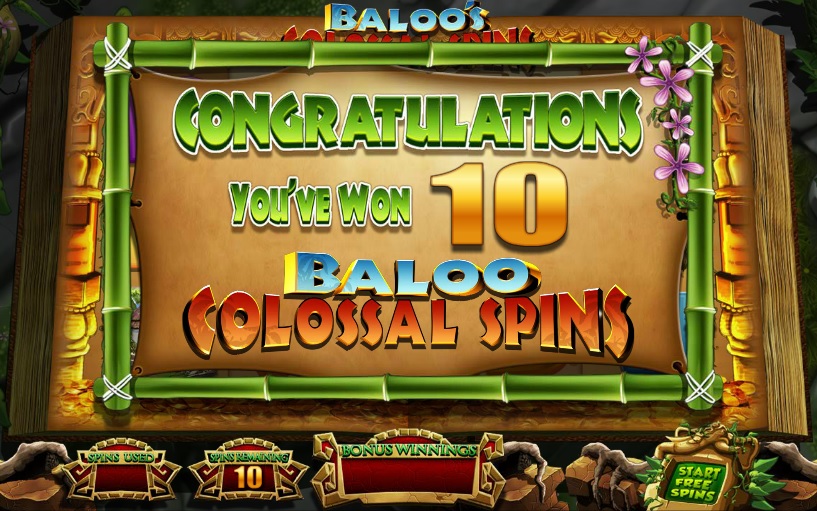 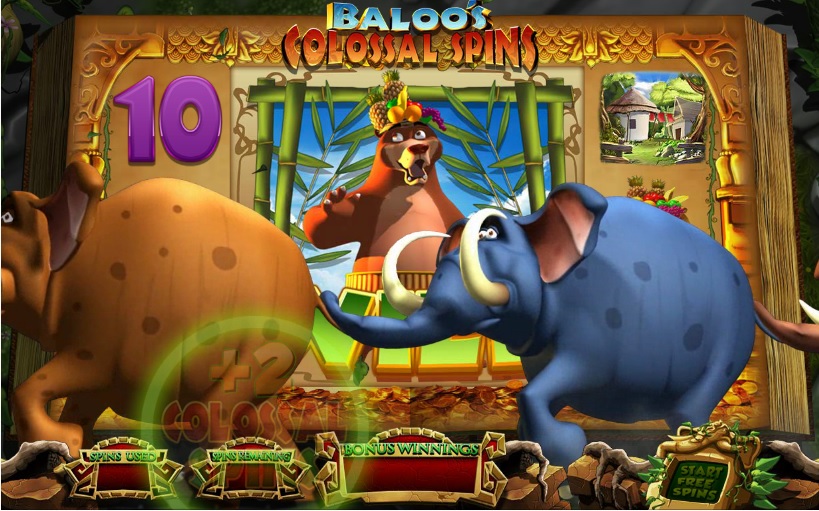 The developers of this game, Blueprint Gaming has done a fantastic job by integrating this amazing story into the theme of Jungle Jackpots mobile slot.

Every character has been designed so meticulously that you would instantly recognize them even if you didn’t know of the title of the game. Baloo, Hathi and Kaa are all expressive when they come on your reels during the bonus features and their antics are uplifting throughout the game. 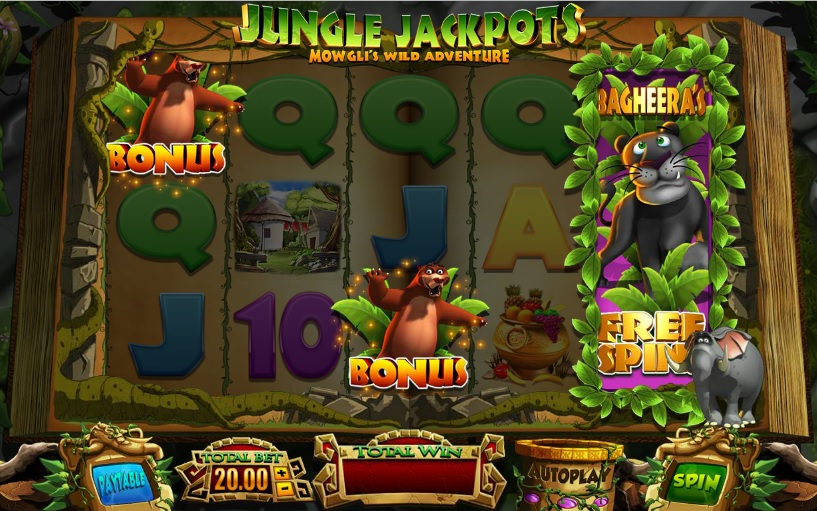 Besides that, Jungle Jackpots mobile slot is a responsive game even with all the high definition graphics and tons of animations. The developers have definitely optimised this game so well, that the game loads quickly on all types of devices regardless of platforms.

There are two aspects of this game that makes Jungle Jackpots as amazing as it is. First are the Wilds after all the different characters, and second is the Mowgli’s Cash Trail Bonus. The Wilds in this game are probably the most important feature for is players due to the fact that it is the only thing that can help keep your bank balance stable.

The random swings by Mowgli across the reel just to replace random symbols with Wilds or the stomping from Hathi that gives you the 4x win multipliers will always ease the pressure on your wallets. 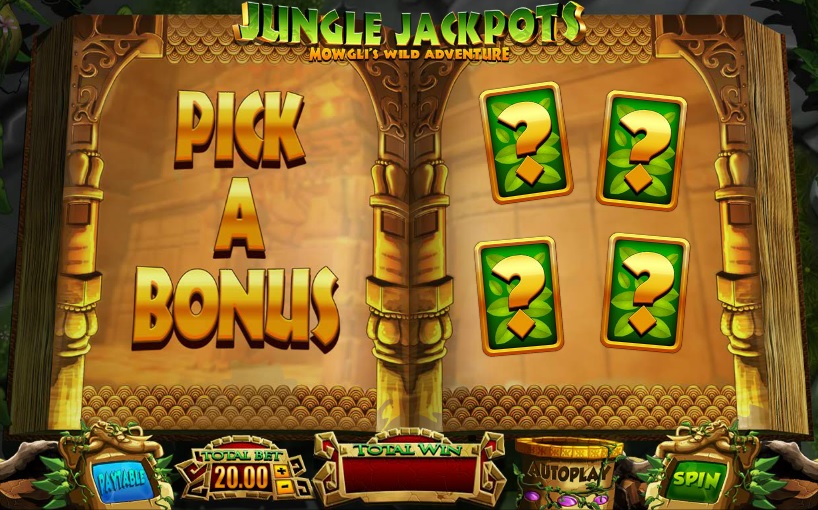 In my humble opinion, Mowgli’s Cash Trail Bonus is a feature that brings this game closer to the original story by Rudyard Kipling. Add the fact that this bonus feature may reward you with cash prizes of up to 1,000x your spin wager and you will realize that the fun never ends with Mowgli and his friends.

There is not one dull moment in this game from the minute you start playing. The colossal number of features and Wilds in this game will keep you and your wallet occupied at all times and the simple antics by Baloo and Kaa will never fail to put a little smile on your face.

As entertaining as this slot is in every way that I can think of, the win potentials is not that great in Jungle Jackpots unless you are able to trigger the bonus features a few times in one gaming session.