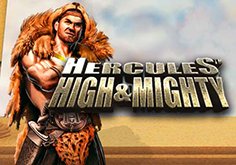 Go big or go home. The son of Zeus returns to the slots realm once again in the form of a mobile slot developed by Barcrest. This slot developer has a knack for designing slot games around known characters and famous themes. Hercules is no different, and from the very beginning of the game, you will be captivated by the “mighty” theme that it pushes forward.

The reels are visually grand and the bonus features in the game are over the top in every thinkable way. You may want to know Hercules rewards players with higher risk appetites better. The game is designed in such a way that the more you bet per spin, the higher your chances of winning.

On first glance, Hercules High and Mighty slot is a heavyweight slot. Not only does it come with 100 paylines, it also features a rather large 5×10 reel layout. In the base game, you would only be using half of the reels and the entirety of it will be activated when you trigger the Mighty Reels feature. Hercules accepts wager starting from a mere 50p all the way to a maximum of £500 per spin. 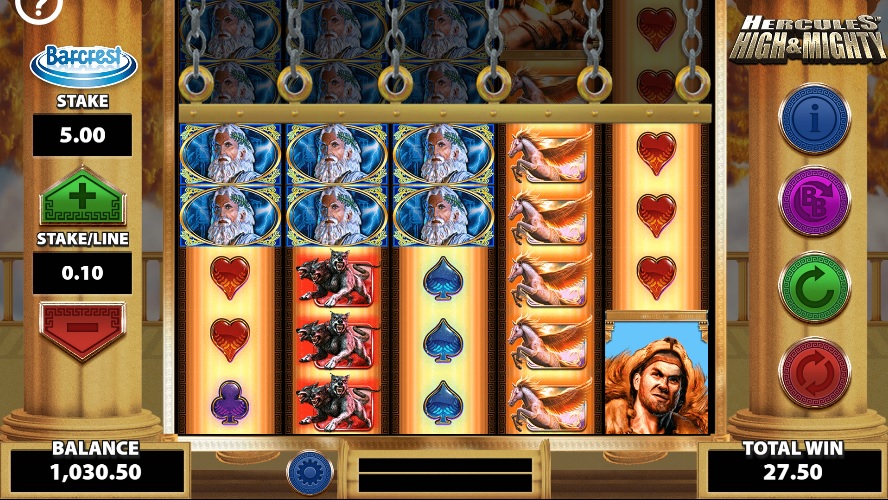 Here comes the more interesting part, the Return to Player (RTP) rates. In this game, the RTP varies between 94% and 98%, depending on your bet. To put it simply, the higher the amount that you wager per spin, the higher the RTP, and subsequently the higher the chances of you winning. 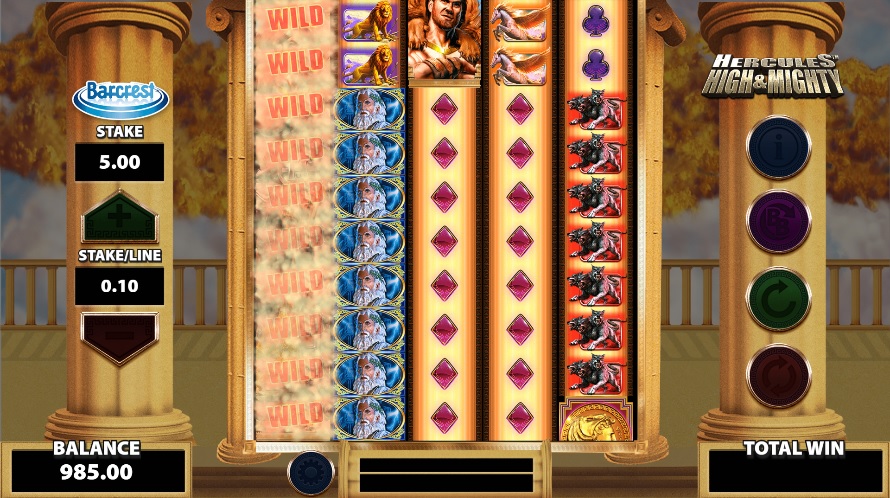 The game itself is set in something that looks like a temple and the symbols are of the other Gods, namely, Zeus, Pegasus and Hydra among others. Unexpectedly, the Zeus symbol is the highest paying symbol in this game and he may pay out up to 250x your spin wager if you are lucky enough to get five of the Zeus symbols in one payline.

The bonus feature are the parts where you would recovering back all the money you have spent on this game. In fact, I would go as far as saying that the bonus features are almost a life line thrown your way in this game. Come out alive and you will be stronger than over.

The risks are high, but so are the rewards. In this slot, the rewards come in the form of three different bonus features, namely the Free Spins, expanding Wilds and finally the Big Bet Mode. 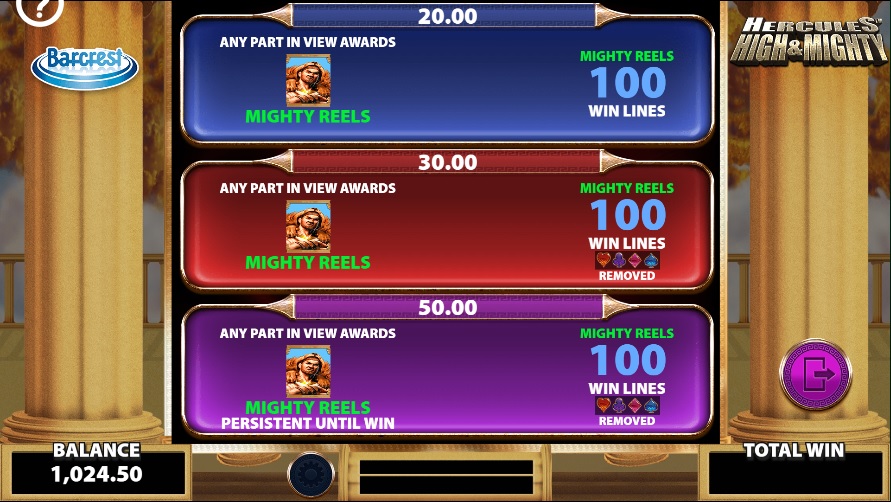 The free spins in this game are triggered when you land at least three scatter symbols anywhere on your reels. Three, four and five scatters will give you eight, twelve and twenty free spins respectively. Do note that the free spins are played on the top half of your reels and they become active when you receive an expanding Wild.

This brings us to our next feature, the expanding Wilds. It is three symbols high and whenever it lands in full, it will expand to fill your whole reel with Wilds. Given that your reels just doubled in size with 100 paylines in them, you can at easily expect to win prizes of over 75x your spin wager. 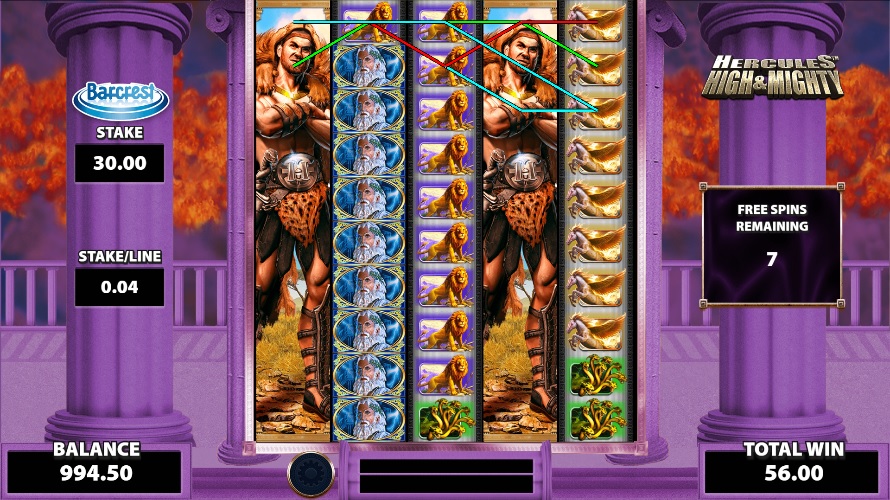 Last but not least, is the Big Bet Mode. You will be given three options which will cost you £20, £30 and £50 for each option. The £20 mode, being the cheapest will give you five Big Bet spins that comes with Mighty Reels and expanding Wilds feature active. The £30 option will give you the same as what the £20 option gives you, but with all the low value symbols removed from the game.

That said, you should be expecting you wins to be way higher than the first option. Finally, the most expensive £50 mode will give you the same five Big Bet spins, but with the expanding Wilds locked in place until you get winning combinations.

As I started playing this game, I wasn’t too sure if the massive reel layout was my cup of tea. The more I played, the more it grew on me and right now, I have to say that the layout suits the game really well. Add the glorious soundtrack on top, and suddenly you will realize how everything fits perfectly with the theme in this game. 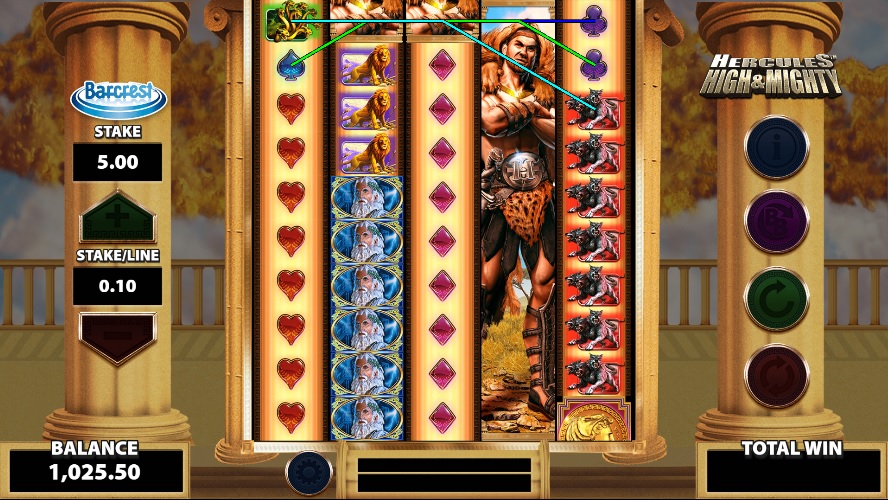 The one factor that significantly improves the gaming experience is the animations. Spins are fast and crisp and look absolutely stunning when the reels expand during the Mighty Reels feature. For those of you who are wondering, Hercules High and Mighty is compatible with all mobile devices regardless of platforms and it loads relatively quickly even on older phone models.

If there is one thing that will remind me of the Hercules High and Mighty slot in the future, it’s definitely the high risk profile of the game. Not only does the high risk get the adrenaline flowing, it fits in really well with the theme and gameplay of this game.

On any other game I can only imagine risks of this level being a total disaster. With the Big Bet Mode in this game, the risks are somewhat mitigated by the significant increased chance of winning. The Wilds works wonders in the presence of 100 paylines. 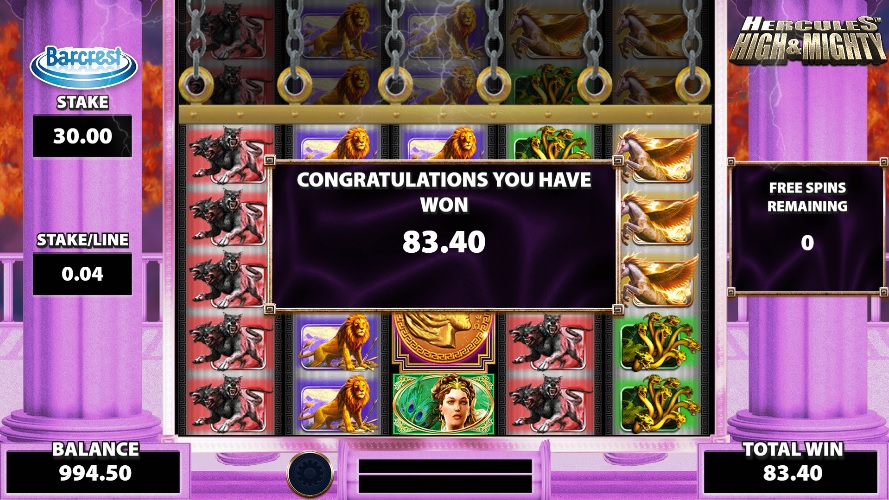 The high variance and the high risk nature of this game is very attractive but could be daunting for those with tight budgets or with more casual play-styles. If you have a larger budget and if you are willing to wait out the drought before hitting the features, then by all means, play for the win! If not, you are probably better off spending your money elsewhere.

One thing I noticed is that Barcrest usually designs games around famous themes or characters. More often than not, this technique does get a little stale if used frequently, but Barcrest has succeeded in changing things around to make their games palatable. Their secret to success in Hercules is the fact that they have designed the slot around the Hercules theme rather than the other way round.