Everyone’s favourite fox is back. Foxin’ Wins Again is the sequel to the hugely popular Foxin’ Wins, and this time we are taken aboard the gentlemanly fox’s luxury cruise ship.

There are plenty of bonuses and features in this NextGen Gaming creation, so let’s get right to it.

NextGen were always going to have to create something memorable after Foxin’ Wins. With a great selection of features, Foxin’ Wins Again is certainly a worthy sequel.

The reels are set against a backdrop of the seating area of the deck of Foxin’s yacht, with dreamy blue seas in the distance.

The wild symbol pictures Foxin’ at the wheel of the boat. This symbol substitutes for all others to form winning combinations, except for the ship’s bell, which is the scatter symbol. Also, the wilds can be stacked, which means they fill the entire reel. 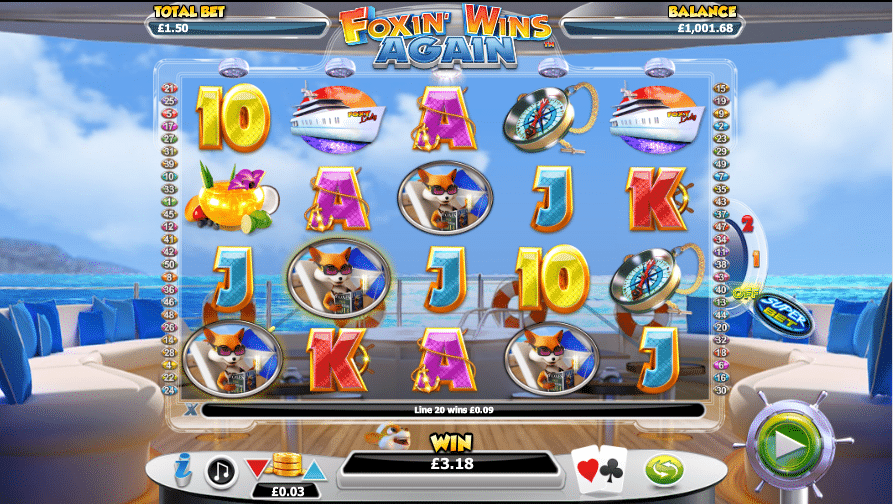 The Superbet feature is an option, and it will cost you if you choose to turn it on. However, with the Superbet switched on you will allow for fox pups to leap onto the screen, transforming symbols into wilds in the process.

But that’s not all. The Free Spins feature also provides players with the chance to have a second round if they aren’t satisfied with their winnings from the first. Just bear in mind that this will forfeit your first round.

The Gamble Feature is another option for players. With this enabled, you can take a gamble after every win. By guessing the correct colour and suit of the next playing card, you can double or quadruple your payout. Or, of course, you might lose it all.

Foxin’ Wins Again is a fantastic slot with a host of features for players to enjoy and customisation too.

We highly recommend any player to give this slot a spin and especially if you enjoyed Foxin’ Wins. Another great game from the talented team at NextGen Gaming.