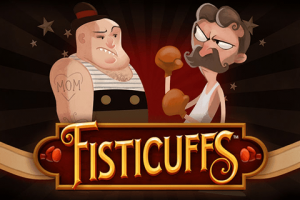 Back in the Victorian ages, gentlemen took to fisticuffs (fancy 17th century-word for fighting with fists) as a way to sort out minor scuffles. I can imagine that these street-side action must’ve been quite a sight to behold. Anyway, NetEnt decided to illustrate this little piece of history with a slot titled Fisticuffs.

And boy did they deliver! This slot is full of punching action—one boxer symbol punches another boxer symbol into different reels, surrounding symbols turn Wild… you get the gist. You’ll just stand by and pick up the coins!

Fisticuffs is a five-reel, 10-payline slot. The paylines are configured such that you could “win both ways.” This means that winning combinations can start from either the leftmost or rightmost reel.

You enjoy almost two times more chances of winning compared to regular slots that only pay from one side of the reel, and a much faster-paced game. The game has a rather healthy RTP percentage of 96.7%, so you’re bound to experience some great payouts in this NetEnt production. 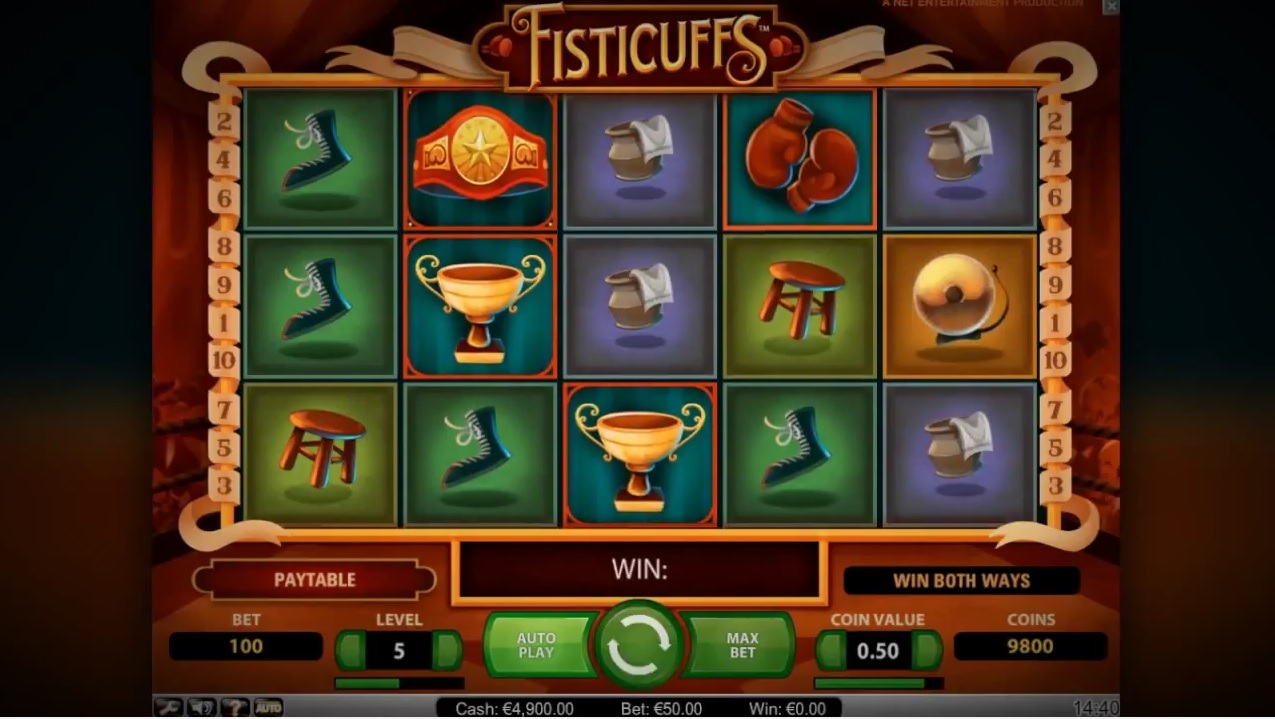 The Fisticuffs reels feature some classic boxing paraphernalia, including old-school boxing boots and boxing gloves, a retro bell used in boxing matches and high-school corridors, a jug of water and a wooden stool to refresh boxers between matches, a trophy and of course, the coveted winner’s belt! The paytable offers up to 500x your wager in a single spin, and a 100,000 coin jackpot if you get five wild symbols in a row.

Before you hit spin, don’t forget to select your desired bet level and coin size. You can toggle between the two using the arrows and settle on anywhere between 20p to £200 per spin. The broad range ensures that all budgets and risk appetites are catered for.

There are two boxers to rally behind in Fisticuffs. One is a fat boxer who wears a hat while the other is much skinnier and boasts a high-maintenance moustache. 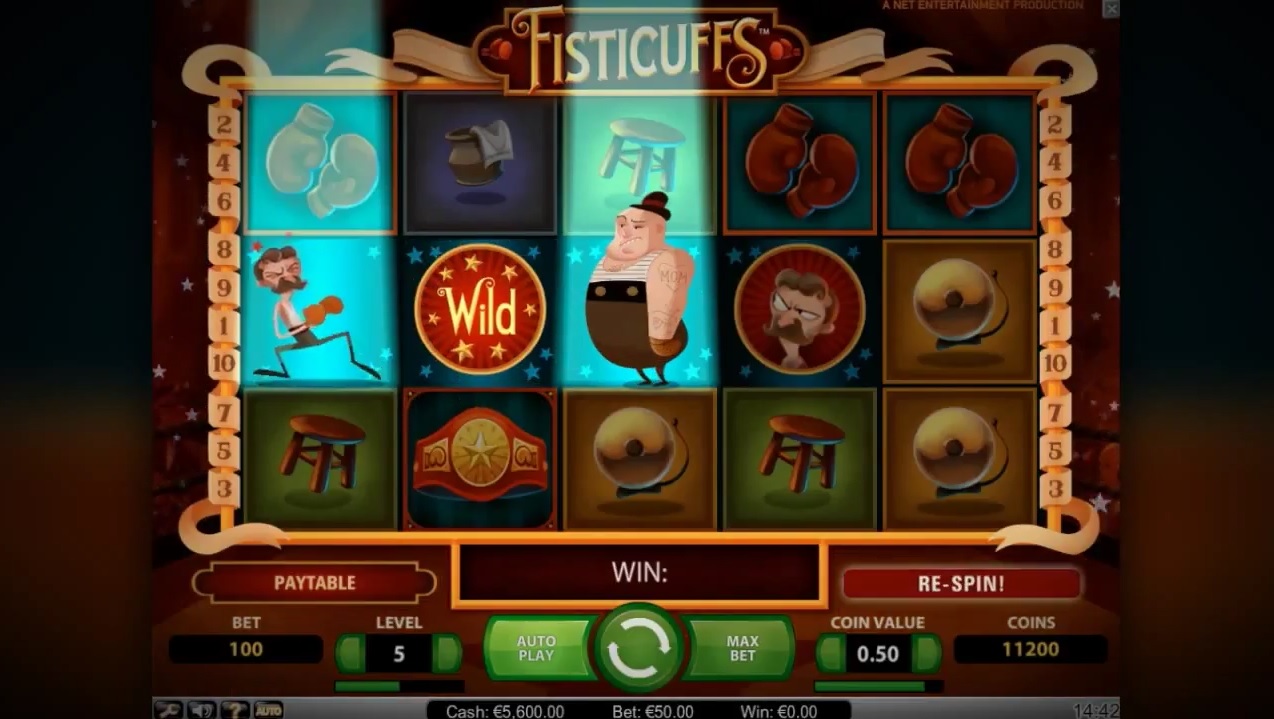 Time to get the party started! Spotlights descend on the two boxers in question and the crowd goes wild with excitement. The Straight Wild punches the Diagonal Wild, or vice versa, and the impact is so strong such that boxer who gets punched moves away by at least one reel. Any symbols that get in their way are transformed into additional wilds.

At a minimum, you’ll get three wilds in a row and if you’re lucky, you can get six or seven wilds on the screen during a single boxing match! These fabulous wilds are then held sticky on the reels for one free re-spin so that you have another go at the wild reels and maximize your winnings. 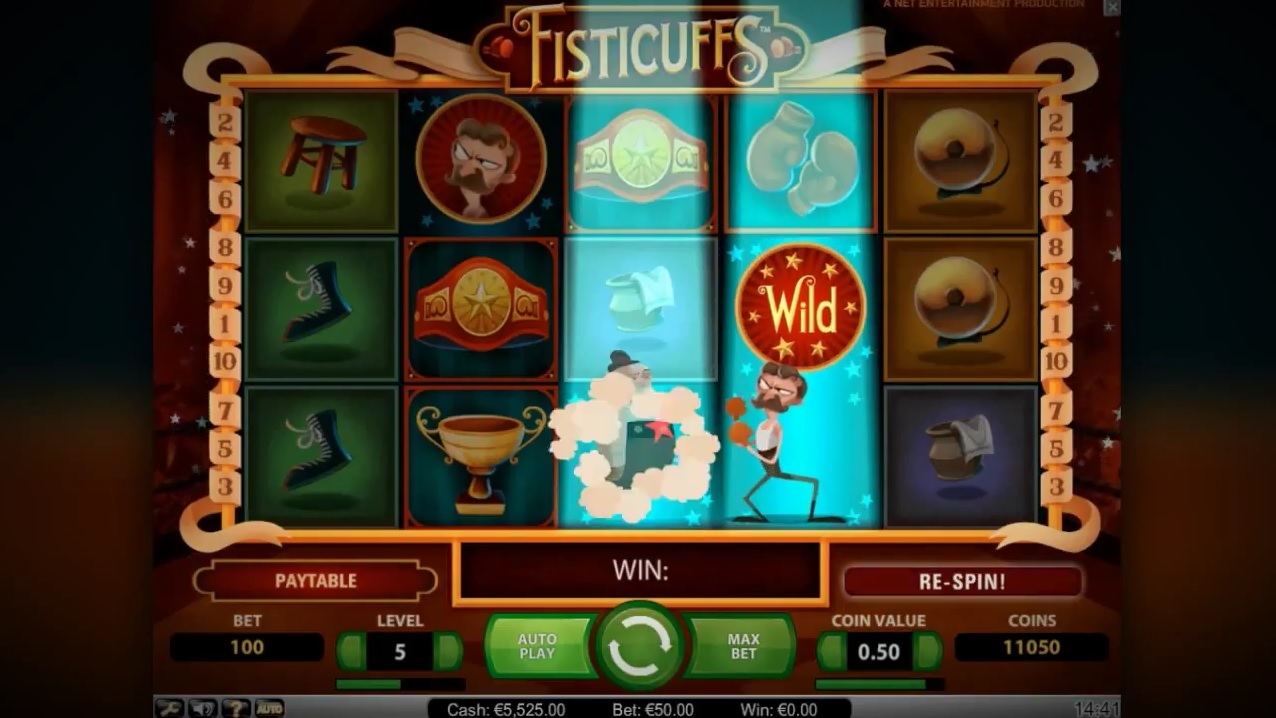 The boxing feature occurs surprisingly frequently, so much so that you may even get annoyed by the sharp ring of the bell. At one point, I simply turned the audio down and basked in the massive wins following each boxing match.

Aside from these wilds, there’s also a Stacked Wild feature, which can appear on reel one and five during a re-spin.

Fisticuffs is a brilliant example of NetEnt’s slot production prowess. The game looks modern and old-fashioned at the same time. It has this aesthetic style that wouldn’t look out of place at one of the modern hipster barber joints. The game’s designers also employed sound very well to complete the gaming experience.

You’ll hear the iconic ring of the boxing match bell after you win and the cheers of the crowd when the boxers appear on screen. All of these elements come to life in both the desktop and mobile version of the game. 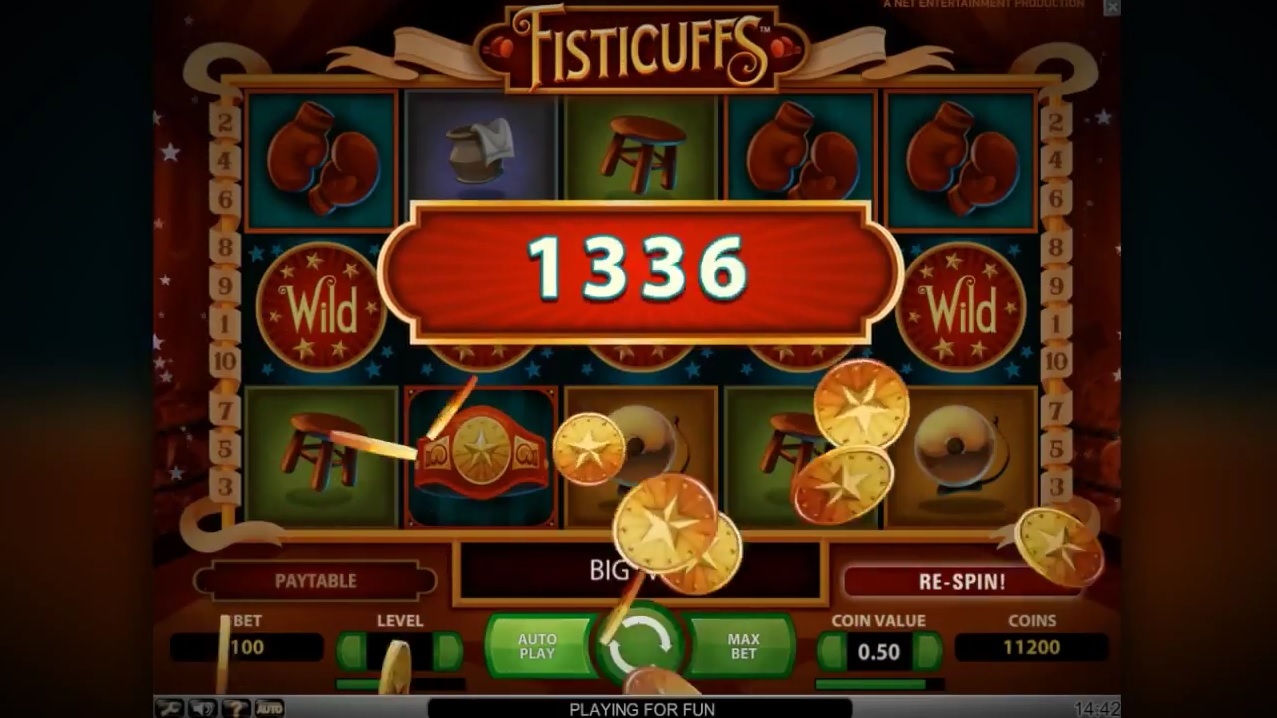 One thing that really impresses me about NetEnt’s gaming studio is that their designers put in a lot of thought into designing their games. You simply can’t miss the delightful little details in Fisticuffs! For example, the chunky boxer has the word “Mom” tattooed on his massive biceps.

When a skinny boxer has a go at a fat boxer, he punches the guy right in his tummy. The skinny guy has got this little dance too before he makes his move; it’s like watching a cartoon! 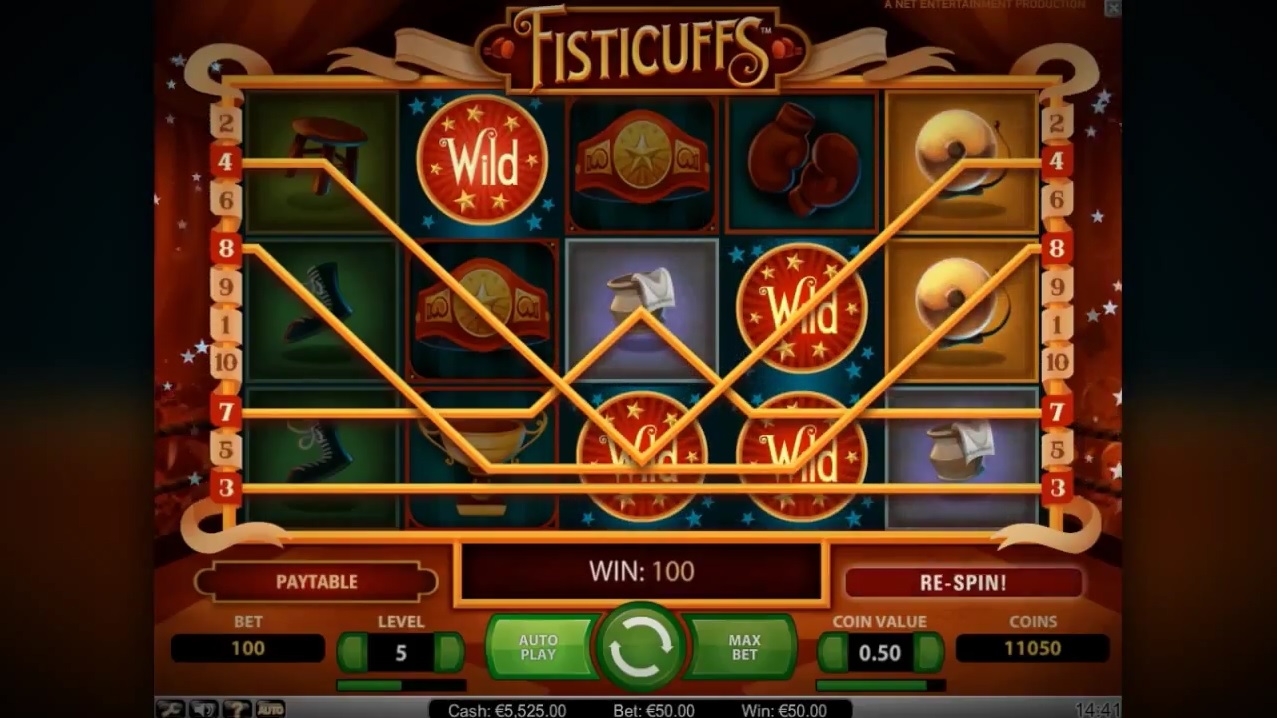 Fisticuffs is all about the wilds. There are straight wilds, diagonal wilds and stacked wilds; all presented on the reels with lots of splendour. You can get carried away with the action and pomp, yet your wallet won’t be forgotten. All of these wilds are included in the game for only one purpose and that is to deliver wins to the players.

Fisticuffs is a rather simple slot and you won’t find any divergent mini-games or even free spins in this game. Despite the simplicity, the slot is a whole lot of fun. Forgive the pun, but Fisticuffs is a knockout win!