For the last couple of years, there’s a been a resurgence in the kind of futurism in online and mobile slots which has made games higher tech and forward looking in their themes and styling. However, a new release on GoWin Casino is bucking this trend, with a retro theme which harks all the way back to the swinging 20s, with a shout out to the heyday of Art Deco.

Deco Diamonds – produced by Just for the Win and distributed by Microgaming – is a pretty straight forward slot on the face of it, drawing the beautiful aesthetics of the Art Deco era to create a truly unique feeling game. While this slot might be coming out way from a relatively young developer, there are still a couple of fun surprises along the way, and we’ve got the full lowdown on what to expect from this slot. 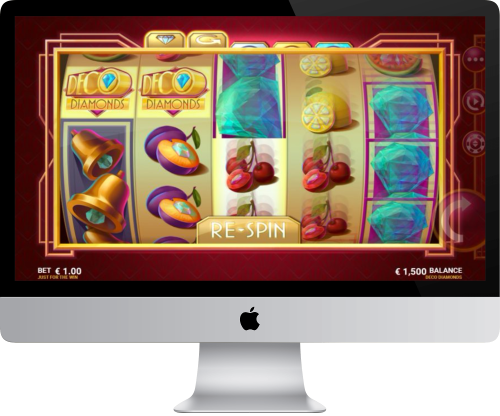 The first thing that strikes you when you open up this 5 reel, 9 payline slot is how extensively the Art Deco theme has been put into play. While the symbols draw inspiration from classic slots – with cherries, lemons, watermelons, peaches, bells, 7s and, of course, diamonds all featured in the slot, they’re drawn in such a way as to seem like they are lifted straight out of the early 20th century.

This is certainly the kind of game which hinges heavily on your appreciation for theme that’s been set up. It’s available on all devices, but is only playable from 10p to £50 per spin, meaning it’s best suited for those looking for a more casual game. The RTP of 96.03% also means that it's fairly easy to make some profit on the slot.

That’s not to say, however, there aren’t some great bonus features (which we’ll talk about in a moment), and opportunities to win big – land The Deco Diamonds symbol over 5 reels, and you could enjoy a win of 1,000x your initial stake.

While it is true that Deco Diamonds is a relatively simple slot, it does come replete with 2 prety valuable bonus features. Firstly, there’s the Deco Diamonds Re-Spin feature, by which you’re able to get an extra re-spin if you land a Deco Diamond symbol on reels 2, 3 or 4. The best thing about this feature is that the Deco Diamond symbol is held in place while the other reels spin, which is actually a great way of ensuring you get a higher chance of wins in the next spin. This re-spin is repeated until there are no new Deco Diamonds on the reels.

The big bonus feature to look out for is the Bonus Wheel, which is triggered when you get 3, 4 or 5 Deco Diamonds as scatters on the reel. There are three levels to the wheel – Silver, Gold and Diamond – each with higher prizes than the last. It’s basically a wheel with multipliers on it, where you can stand to make a handy 1,000x your initial stake.

Despite this only being the third ever game to be developed by the team over at Just for the Win, it demonstrates incredible skill. The slot looks and sounds spectacular, whichever device you happen to be using, whether it’s mobile, laptops or desktops, with its evocative aesthetic and flapper styled soundtrack.

It’s true that the gameplay is somewhat simple, but that’s of course to be expected for a development company still finding its feel. It does, however, have its fair share of excitement, with highly volatile gameplay which adds a thrilling element of risk.

While there’s no doubting that this is somewhat of a simple game, there’s no denying that it has its charm. The element that we’re most excited about is the fact that the two bonus features can combine to create even bigger winning opportunities. If you win big on each of the re-spins, then trigger the bonus reel, you could then land another 1,000x your initial stake. In total, this means you could stand to pocket an impressive 2,323x your stake.

So, Here’s Our Take on the Game

Look, this isn’t the most spectacular game we’ve ever added to our roster, but there’s no getting away from the charm of its enigmatic style, and the thrills and fun you can enjoy off the back of that. It’s great to see new developers coming up, and we’re sure Just for the Win has a bright future ahead of it; we’ll of course be happy to add more of its slots to our casino as and when they hit the market!