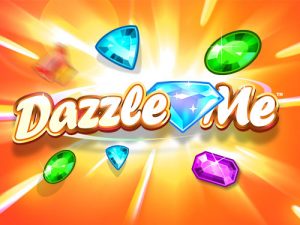 Here’s a slot that has made things difficult for itself from the get go. Titled “Dazzle Me”, the game has made a bold promise to take its players’ breath away. The game’s description speaks of three features: Dazzling Wilds, Dazzling Free Spins and Linked Reels – a combination of features that can really generate wins if configured correctly.

The reels are completely covered in colourful gems, although I hope that it isn’t the only dazzling element in the game. Well, let’s see if the Dazzle Me slot here at GoWin lives up to its name. 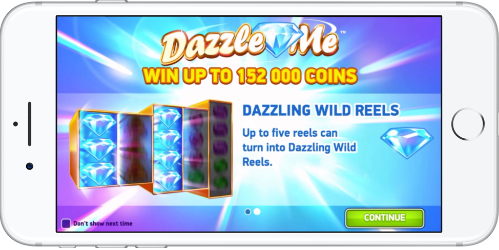 This unconventional setup enables the game to pack a whopping 76 paylines into a single game. Dazzle Me accepts bets from 20p to £200 per spin. This is a nice, wide range that will definitely cater to players of all types and budgets. The same applies to its RTP score, which is an impressive 96.9%. 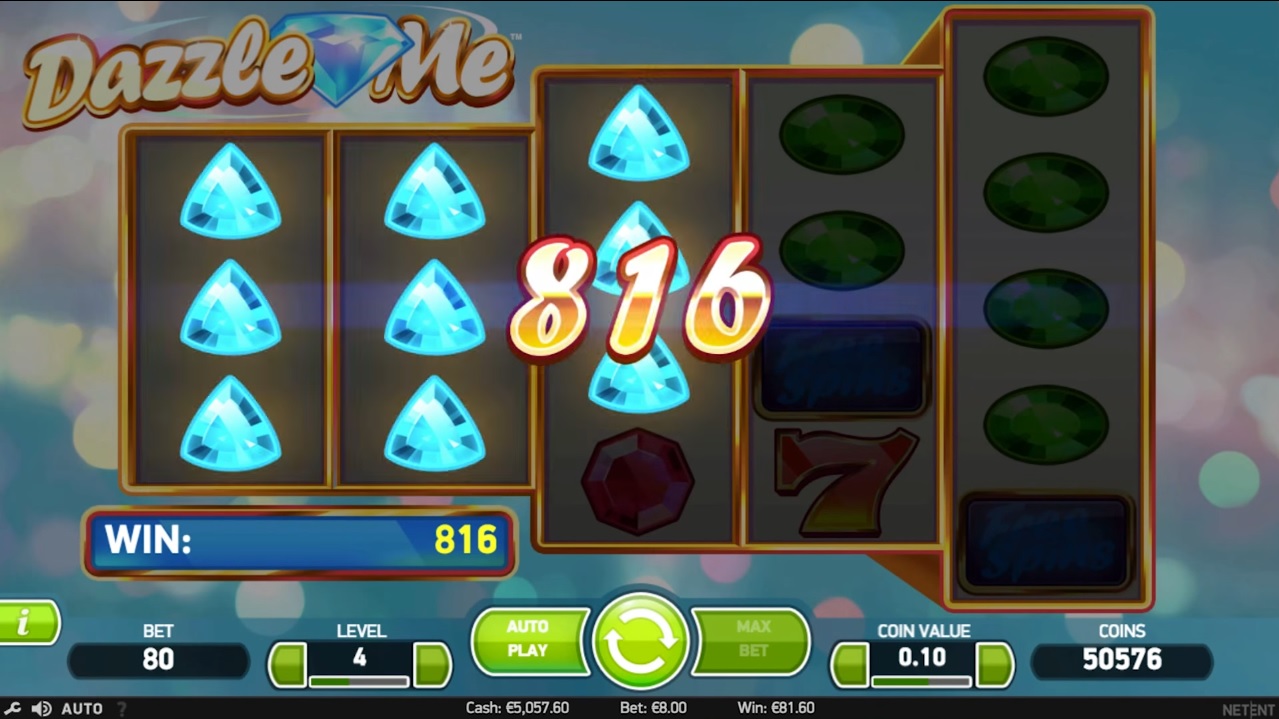 I like to judge a slot game by its paytable, as I believe that it’s a good marker for the profitability of the slot. It’s important to look out for the range of payouts (some games only offer up to 50x wins as the top prize) and the number of symbols (too many symbols and you’ll have a hard time winning anything). Dazzle Me has only six base symbols and a Wild symbo – this is definitely a good sign.

The payouts are definitely on the generous side too. Payouts range from 3x to 200x and you can win up to £152,000 in a single spin. In both of my trial gaming sessions, I scored payouts in the range of 3x to 20x. Finally, the game has a payout percentage of 96.9% and this is on the higher end of the scale. My rule of thumb is to never play slots with payout percentage below 96%.

So, the game promises three features: Dazzling Wilds, Dazzling Free Spins and Linked Reels. Let’s go through them in turn. The first and most frequent feature is the Dazzling Wilds. At any point during your gameplay, the game may surprise you with full reels that are completely covered in the Wild Diamond symbols, the most valuable gem at all. As any slot player knows, wild symbols are almost always a precursor to big wins. These diamonds can stand in as replacement for any other symbol to complete winning paylines. 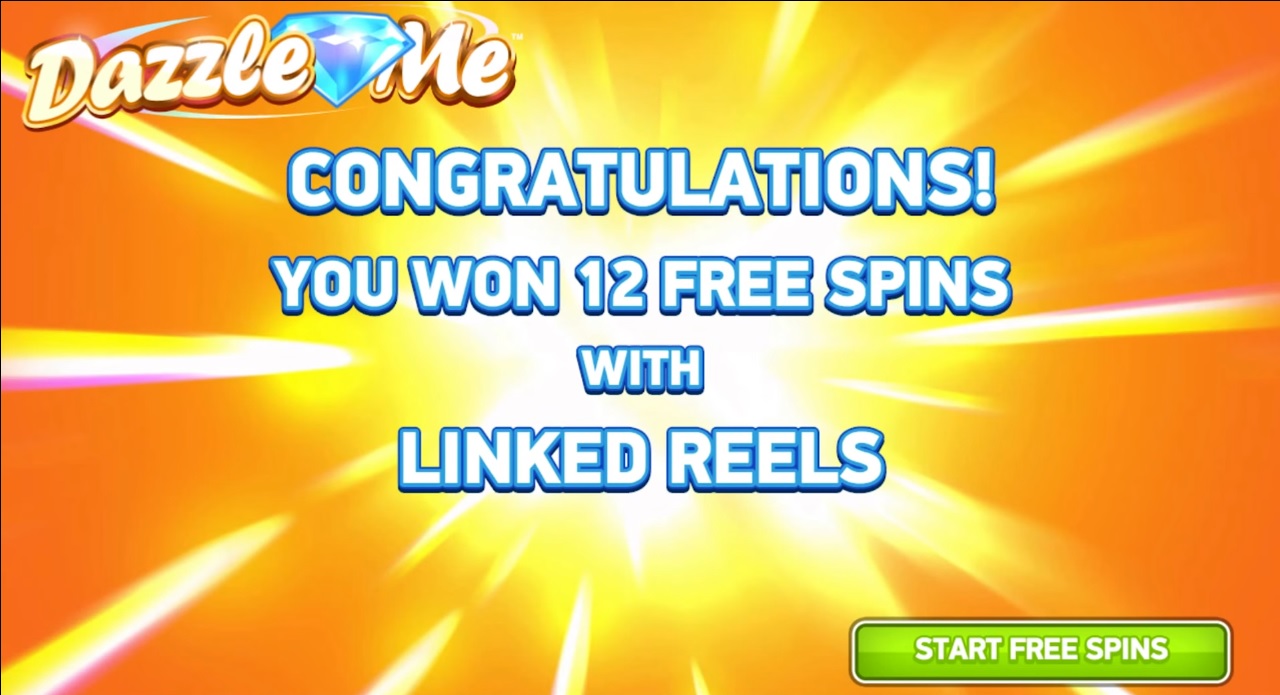 The Linked Reels are activated during the free games. The adjacent reels are coupled together in pairs (either Reel 1 and 2, or Reels 3 and 4) and spin together in sync. The symbols on both line up perfectly and this essentially doubles your chances of winning. This is because you’ll get two symbols automatically lined up on paylines; hence, you only need one more to win. I prefer to get a linked pair of reels 1 and 2 as this generates slightly more wins. This is because the game pays wins from left to right.

When I first laid eyes on the game, I couldn’t help but notice how much it resembled Bejeweled, the match-three game that I’ve played since the early 2000s. The game is covered is colourful gems. However, these gems are slightly more like ostentatious costume jewellery than real symbols of wealth. There’s little twinkly music in the background too to match this shimmery vibe. 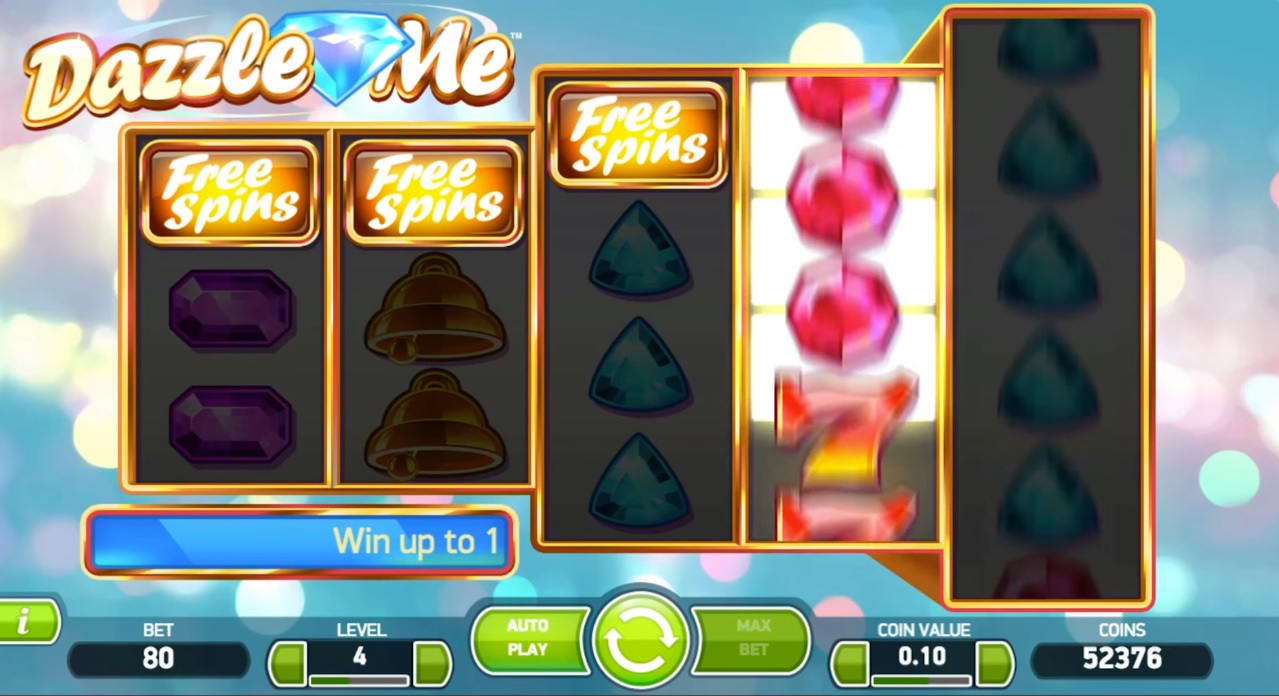 Dazzle Me is produced by a mega-gaming company called NetEnt. NetEnt has hundreds of slots games in its portfolio and most of them are real trailblazers, cutting-edge creations that push the envelope of game production. However, reviewers like myself like to play an occasional game of “spot the similarities/difference” with its games.

In this case, Dazzle Me is almost a copy of another older NetEnt slot, Twin Spin. Hence, I owe you a comparison. Both games have the Linked Reels feature and similar sized payouts. However, Dazzle Me has the added “Wild Reels” feature so you can expect slightly more payouts than in Twin Spin. 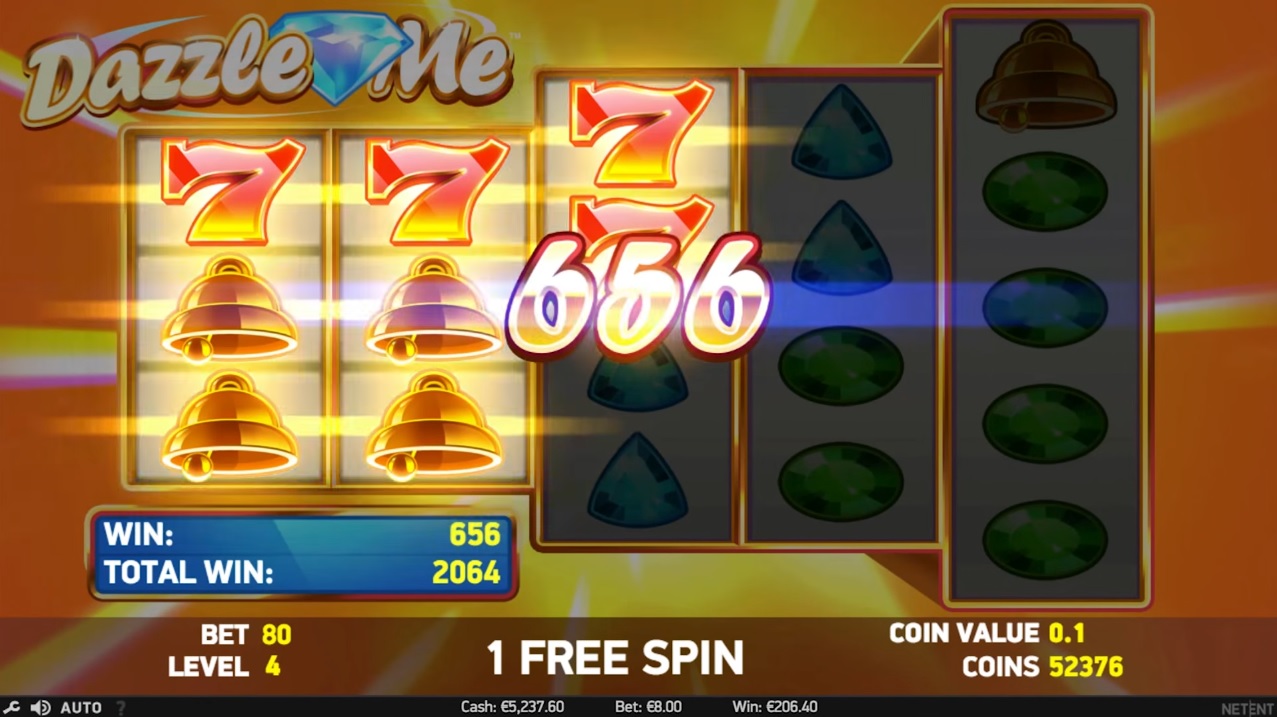 I have three words to summarize Dazzle Me and that’s “fast paced fun”. Dazzle Me keeps sprinkling wins all over its 76 paylines and you’ll never have a dull streak with zero wins. When the free spins feature is activated, the game accelerates even further and your board will completely light up with wins.

However, don’t expect for these wins to be very large in size, but that shouldn't be a reason not to give Dazzle Me a shot. That's especially if you are a new player and can claim £850 in welcome bonuses – plenty of free cash to play with.