The Cats slot is a game designed by the very highly respected IGT. Cats is a game which has been operating on casino floors for many years as well as in the online department.

Cats has a Split Symbol feature and a Free Spins bonus round too. All will be revealed in this review.

It immediately becomes apparent that the origins of Cats go back to a traditional physical slot machine, with that unmistakable classic feel.

This is a 5-reel, 3-row slot which is all based on the big cats. The game has an arcadey soundtrack and the graphics and visuals don’t exactly compare to slots of the modern-day.

The symbols on the reels include the classic low-paying J, Q, K, A symbols. The higher-paying symbols picture big cats, namely a leopard, a tiger, a panther and a lion.

The wild symbol is a big Cats logo and the scatter symbol pictures a paw print. 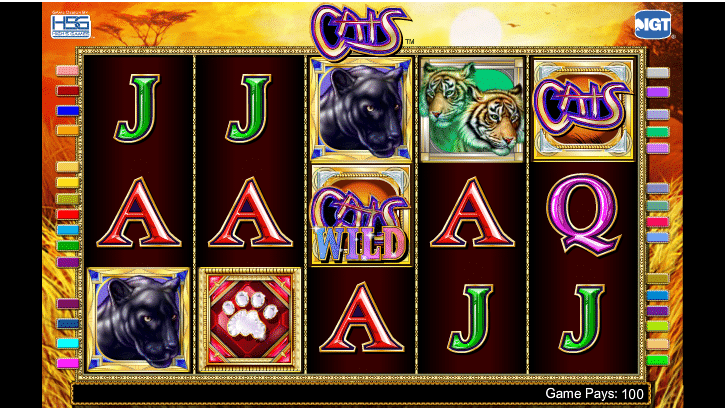 In the Split Symbol feature, the symbols essentially act as two rather than one. As a result, a ten-of-a-kind combination is possible.

Wilds can also function as split symbols, making the possibility of big winning combinations all the greater.

Also, the scatter symbol can also become a Split Symbol. Consequently, the Free Spins bonus round can be triggered more easily. To enter into the Free Spins round, you must land at least five of the paw print symbols anywhere on reels 2, 3 and 4.

Also, the reels are slightly adjusted during the Free Spins feature, allowing for easier winning combinations.

The Cats slot definitely won’t wow you with graphics and visuals. Still, the Split Symbol feature and the Free Spins make this a game worth trying out. It’s easy to see why Cats is one of IGT’s most popular games both in land-based establishments and online.