First the World Cup, then the Olympics, football has gained huge traction in the recent years following these highly publicized international events – a job that the English Premier League has half completed.

These superstars have not only entertained us with their outstanding talent, but also with the priceless interactions that they have had with fans. We're glad to announce that football fever has swept into the world of slot games and we, of course, mean that Football Carnival slot by Playtech has arrived.

Football Carnival is a three row five reel base slot game with a jaw dropping 50 pay lines going from the left to the right, a minimum bet of £0.50 and a staggering maximum bet of £1,250. The RTP, or Return to Player, is at 96.34%. Payout frequency can be said to be medium, with a high average payout amount.

This gives the game a medium to low variance as drought periods can be stretched out, like seeing your favourite player taken out of action, heart-wrenching. 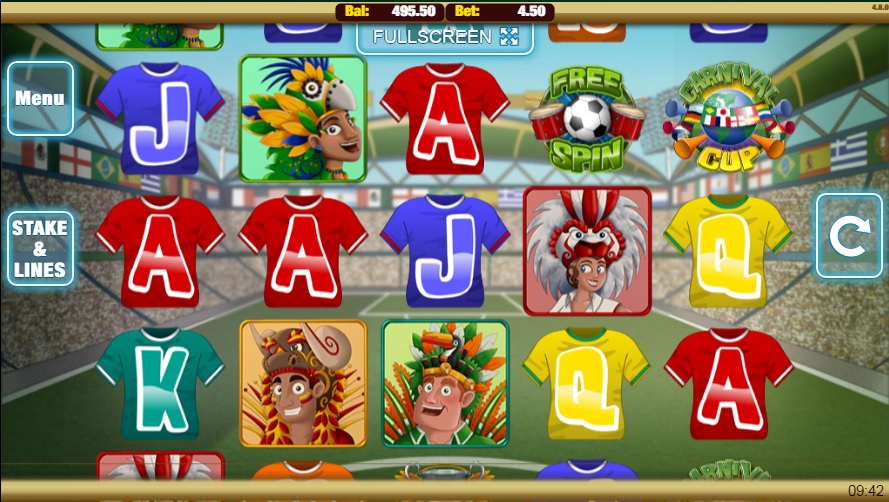 In our experience playing this game, our average winnings were approximately two to three times our wager. In any case, given the medium to low risk in this game, that is a higher than average payout. Sustaining your bank balance will not be a huge issue here as just a couple of big wins will catapult you out of the danger zone into the profitable zone.

Once we've gotten the easy stuff down, let's look at the features of this carnival. Right off the bat, the six ‘normal' win symbols aren't actually normal at all. These symbols occupy two rows on a reel, with each unit giving the same win multiplier as the symbol's multiplier. This will pair nicely with the 50 win lines to give you a consistent payout, but bear in mind the amounts are not too impressive in general. 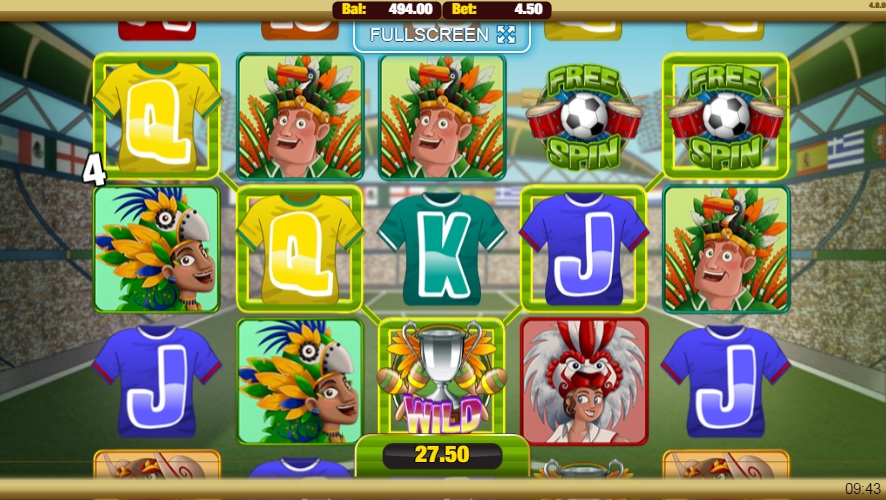 Next up are the three larger win symbols, with the largest being the Brazilian flag symbol, giving you up to a thousand times your wager if you hit five on an active pay line! These, however are actually pale in comparison to the Wild symbol. The Wild symbol, other than substituting for all symbols except for the Extra Spin symbol, will also make you scream GOAL! If you ever hit five of these, the ‘Jackpot' gives a whopping 3,000 times your wager. Brace yourselves for the next hit, this game has not one but two Wild symbols! The second one will be a feature tucked away in the Extra Spin stage.

The Extra Spin symbol has Scatter mechanics attached to it, meaning hitting three or more anywhere on your reels in any configuration would trigger 10x Free Spins, or in this case, 10 free kicks? Upon entering Extra Spin mode, a 2x win multiplier will be applied to all your winnings which will go up by one every two spins, and all win lines will be multiplied by the bonus multiplier at the moment of the game. 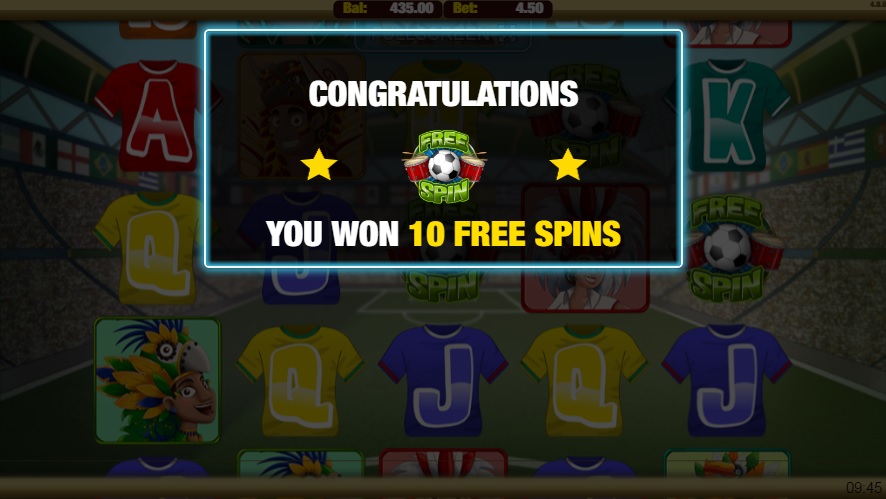 You would start off with a Wild symbol in the middle of reel three. Having two Wild symbols mean more chances of completing winning paylines, and remember, they don't need to be in an active pay line. Deep breath, and with some mental calculations, you'd be stunned again, the game awards up to a theoretical limit of 21,000 times your wager! Let's hope we misinterpreted the way the bonus multiplier works. Who cares? The game is on!

This game is festive, a perfect homage to the 2014 Brazilian FIFA World Cup, so good old football gets a carnival theme revamp, giving us amazingly nostalgic visuals, the symbols, the background picture, the music, all aspects of a good slot game came together and did nothing else but deliver. The game loads in a snap, plays well and is animated smoothly, not the most graphically advanced slot game out there but this is enough. 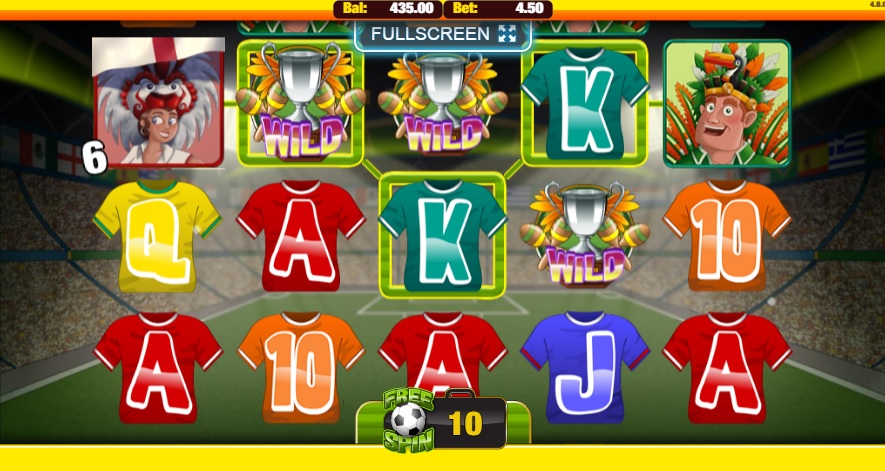 The most unique feature about this game is the Extra Spin bonus stage. No one has dared grant players access to two types of Wild symbols (interchangeable mind you), Free Spins and bonus multipliers all in one package. Crazy in the head or passionate towards players? We never know. All we need to care about is how to spend our winnings. But let's not count the chickens before they hatch, boot up and warm up to Football Carnival. 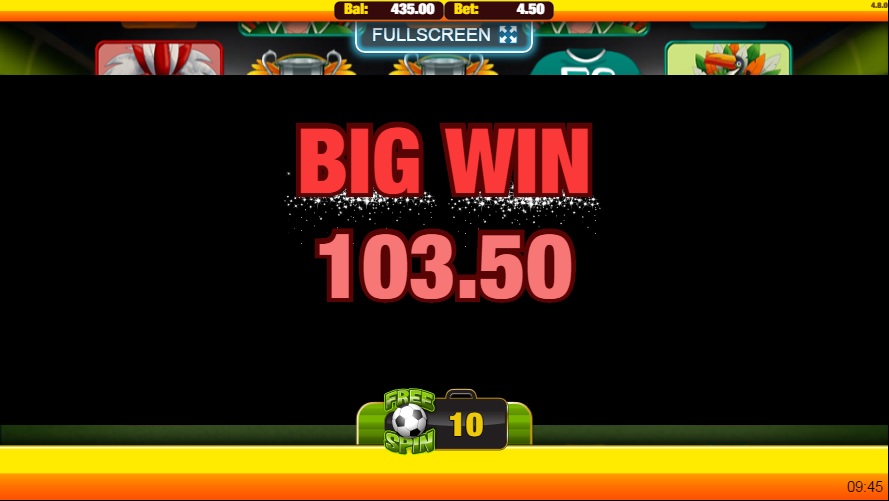 Carnival Cup is a game with a theme and a tribute to one of the most iconic events in the world. We automatically relate better with this game and given the fact that it has Scattered Extra Spin symbols, two types of Wild symbols and 50 paylines, this game averages towards a low variance game, which is in contrary to what we said in the beginning about it being medium variance.

The relaxing atmosphere, the passion for football and the quality of gameplay stood out the most in Carnival Cup mobile slot. Let's stop whatever we are doing for a moment to appreciate Carnival Cup by Playtech. We highly recommend this game to everyone.