The Candy Bars slot is a game created by IGT with bold and bright colours and animations. It is a slot with a retro feel, despite the fact it was released in 2013.

The main attraction of the game is the different progressive jackpots which are won when some scrumptious chocolate hits the reels.

Candy Bars evokes feelings of those wonderful traditional sweet shops. The slot has an old school feel and is all played out to a rather strange, adventurous soundtrack.

This slot has an unorthodox reel structure of 4 reels and 4 rows. You will notice three sweet jars at the top of the screen, which all relate to the progressive jackpots.

The symbols in the base game are purple, red and white candy as well as blue and red 7 symbols of the classic kind. Also, these symbols can all become stacked on the reels.

The wild symbol is a 2x icon which appears on reels 2 and 3. This symbol substitutes for all others to form winning combinations, and doubles those wins too.

With two wild symbols, the line win will quadruple. 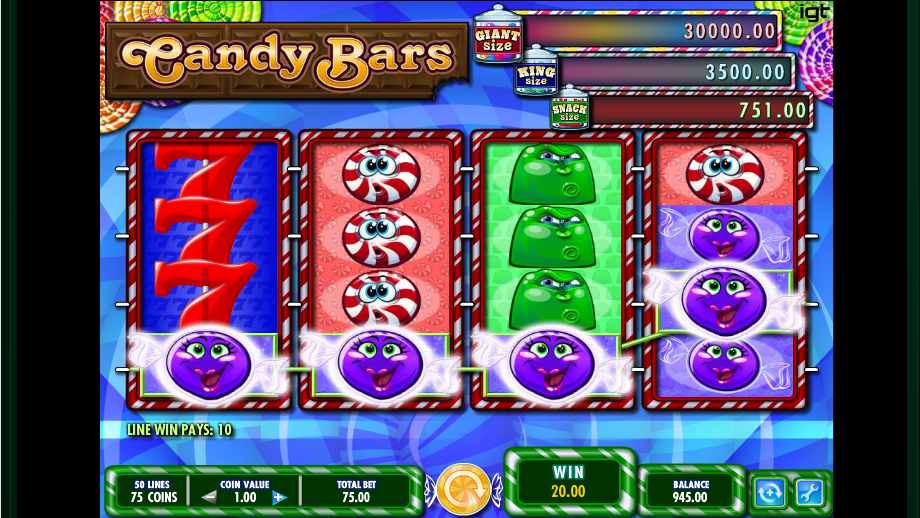 The first feature we want to let you know about is the Blackout Win. The Blackout Win comes into play when matching symbols cover all positions on the reels.

This feature is worth between 5,000x and 25,000x your line stake, depending on the particular symbol. Unfortunately, the wild symbol does not come into play with the Blackout Win.

As we mentioned, these progressive jackpots are won when chocolate fills the reels. Let’s set out what the prizes would be if you were playing with a coin value of 2.00:

This is certainly a quirky slot and is one which is likely to appeal those who like things a bit unusual and unorthodox. The progressive jackpot especially makes this game worth a spin or two.