Bank Walt slot is a game created by Magnet Gaming with a host of features for players to get their teeth into. This well-designed slot takes us back to a time and place where banks were an altogether different place.

Bank Walk is set in an opulent room in an early twentieth century style bank. Walt, the well-dressed bank clerk, stands to the side of the reels, waiting for you to spin the reels.

This is a five-reel slot with three rows, giving it the classic video slot structure.

All the symbols are related to the theme of the game. You will come across the safe symbol, the dollar sign symbol, a case of gold, bottles of expensive liquor, a typewriter, a phonograph and a humidor. All classic symbols of the wealthy early twentieth century gentleman.

The Wild symbol only appears on reel 3, but it substitutes for all others to form winning combinations, except for the bonus symbols.

One of the bonus symbol pictures a vault, and the other pictures a code lock (more on this below). 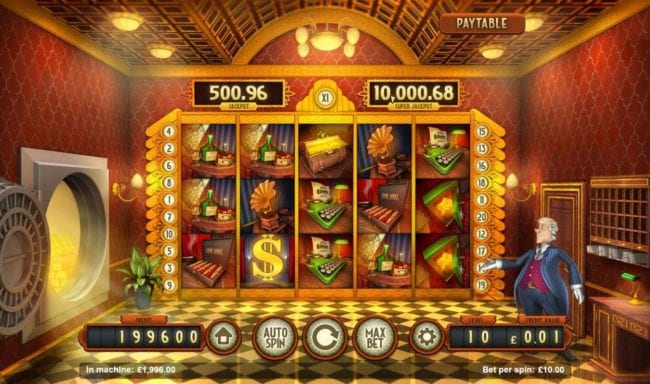 The great thing about Bank Walt is the number of features for players to enjoy.

After every win, the Respin Multiplier comes into play. The multiplier value will increase above the middle reel before it then respins. If a win results from the respin a multiplier of up to 5x will be added to the payout.

The Game Flash feature is triggered by landing three of the Game Flash symbols on an active payline. A random prize or entry into one of the following bonus features is the prize.

The Bank Vault feature will activate when at least four of the Bank Vault symbols appear anywhere on the reels.

You will be taken into the vault and in here you will pick from a selection of boxes. Whatever prize is found in the box is yours to keep:

The Code Lock feature is triggered when you land the two halves of the code lock symbol next to one another on reels four and five.

In this feature, you have nine dice rolls to open the lock. The nearer to the centre of the lock you go, the bigger the prizes become. If you collect four coins in this feature, you will have a spin on the wheel, just like in the Bank Vault feature.

Bank Walt is a great slot game with plenty going for it. There are many innovative features to enjoy and the design of the game is excellent. Bank Walt is a slot which is definitely worth a spin.