Slim chance that you are a massive archaeology afficionado, yet with a huge archaeology festival taking place in the UK real soon, we thought it'd be fitting to compile this guide of the best warfare mobile slots we've got. So, if you don’t have the time to attend to the festival and its events, we at GoWin have a simple solution.

Why not celebrate the occasion in our own special way – by playing slots? You may have already thought of Gonzo‘s Quest or Jungle Jim El Dorado. Yet, we have a slightly different idea, because aside from Indiana Jones, archaeology has a lot to do with swords, shields, battles and warfare. So, here are the top four warfare mobile slots that you can play at GoWin Casino. Grab your sword and charge! 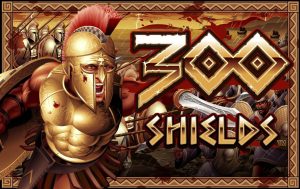 In the history of warfare, Sparta was one of the kind. That’s the reason so many games take inspiration from this war-oriented society. 300 Shields is one of such games and probably the most popular of all the warfare mobile slots in general. Released in 2010, this game is still played to this day. Trust us, you’ll want to play it too!

While it features a standard 5×3 reel layout and 25 paylines, the bonus features here are like no other. These are mostly based on wilds and scatters. Landing three scatters (shield symbols) will activate a free spins bonus round, which is basically a battle that you’re aiming to win. The battle consists of four stages with an ever-increasing multiplier.

If you reach the fourth stage, things get real brutal (in a good way). Every single win during the bonus round that includes a wild symbol will reward you a 300x multiplier. No, that’s not a typo. That’s how epic this game is. Achieving such victory isn‘t as difficult as winning at Thermopylae was, but it goes without saying that 300 Shields is a high variance slot and it rewards bravery with huge payouts. 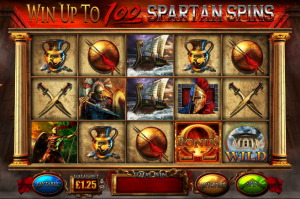 Another high variance warfare mobile slot that, accidentally or not, shares its theme with 300 Shields, is Fortunes of Sparta by Blueprint Gaming. The game can boast of great graphics, intense battle music and 20 paylines on a 5×3 grid. Oh, and it has some very nice features, too.

For example, there are sticky stacked wilds in the main game, in the form of a single symbol. Every time a Fiery Spartan Streak symbol lands on the third reel, it expands to fully occupy the reel and acts as a wild, greatly increasing the chance of winning. All the winning symbols then also stick to the grid, while the remaining symbols continue spinning until no more winning combinations are made.

When it comes to free spins, it gets even better. Three scatter symbols reward eight free spins. These bonus symbols are sticky, too, so if you land more of them during the free spins, you also increase your free spins counter. Ultimately, if you manage to get 10 bonus scatter symbols, you’ll have 100 free spins. By the way, all free spins feature Fiery Spartan Streak symbol mentioned above, resulting in enormous wins. Are you pumped up for battle yet? 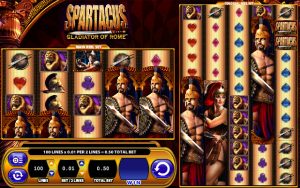 Ok, let’s leave Sparta for… Spartacus. Despite the similar names, Sparta and Spartacus don’t have much to do with each other. The same could be said about Spartacus Gladiator Of Rome and the games above. Actually, this warfare mobile slot by WMS is quite unusual and reminds only of a few other titles from WMS. It features two separate sets of reels, one of them being the Colossal Reel. The smaller set is 5×4 and the larger one is 5×12. There are 100 paylines across both sets.

When it comes to features, there’s scatter symbol that counts jointly in both sets of reels. If three out of 80 symbols (that’s the number of symbols across both sets of reels) are scatters, you‘ll get eight free spins and 2x multiplier. Make it five scatters and you’ve got 20 free spins and a 20x multiplier. The reels are also linked to one another. If you manage to land a stacked wild in the smaller set, it will instantly appear in the larger set as well. This usually results in really nice winnings.

Warlords: Crystals Of Power by NetEnt isn’t based on historical figures or societies like the games above. That’s not the only reason why this warfare mobile slot is different from the others. Released in November 2016, it’s the newest title in the list and you can see that at first glance. That’s primarily because it features an introduction video so captivating, we wish it was a movie! In short, the game isn’t about large armies waging war, but, rather, a barbarian, a priestess and a samurai individually fighting for power.

As for the gameplay, this is a relatively low variance slot with 30 paylines, three types of free spins, wild overlays and other intriguing bonuses. Each character has a unique extra spin and wild feature. Each character rewards a different number of free spins and bonus effects during these spins, such as a multiplier or scatters acting as wilds. Wild overlays also occupy different positions depending on the colour of scatters that activate them.

Finally, there’s battle between the characters every time scatters of two different colours land on the grid. The winner of the battle turns all the scatters into their own colour and makes them stick. If more scatters appear before the feature ends, free spins of the winning character are activated. However, even if you don’t manage to do that, you’re often awarded a cash prize. So, battles between warlords is always a good thing – and exciting, too.