The Mobile Phone Billing Slots With The Best Bonus Features 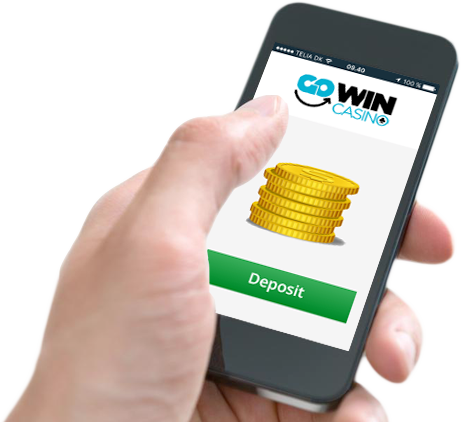 As a phone bill casino, GoWin casino offers players the ability to deposit straight from their mobile phone via Boku. The service is incredibly fast and convenient, some of the many reasons we're always going on about it! But did you know that you can play all of our slots when you deposit via mobile billing? At GoWin, we don't discriminate against certain payment methods, which means that all your favourite games can be funded anyway you like. Today, however, we're rounding up the slots with the best bonus features. This includes wilds, mini-games and more. If you're a mobile phone billing user, or any other payment method user for that matter, then why not check out some of our best games for bonuses!

Wish Upon A Jackpot Mobile Slot

Wish Upon a Jackpot by Blueprint Gaming, is set in the world of fairy tales. It features familiar characters such as the three little pigs, puss in boots, Pinocchio and a fairy godmother. The game is packed full of features and extras, which makes it one of the most playable games around.

During play, you may find the Fairy Godmother gracing your wheels. She can appear randomly after any spin, and will award a ‘fairy godmother spin'. Three pink bubbles will sit above the reels, and choosing one will reveal one of five different bonuses. These could be anything from wild reels, which turn a whole reel wild, to a ‘fairy win spin' which promises a huge winning spin. Furthermore, you can also claim direct entry into one of the bonus feature games.

In addition to entering a bonus game with a ‘fairy godmother spin', you can also activate these games by landing three or more of the book symbols across the reels. You'll have to choose one book to read, and it'll reveal one of four bonuses:

Witch Pickings by NYX, was the winner of this years Global Gaming Award for Innovation, and for good reason too. The slot boasts fantastic animation alongside bonus features we've never come across before. The stand out feature of Witch Pickings is that players can have some input into how the game plays out, picking and choosing the bonuses you'd like to see more of. 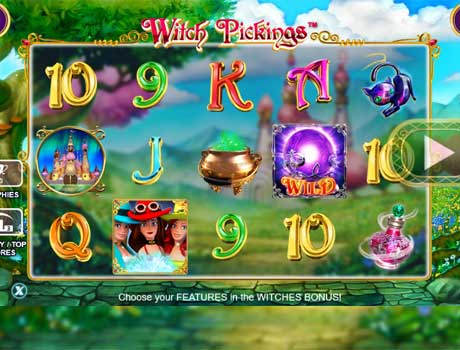 This 5 reel, 25 payline slot is also set in a fairy-tale land, with three witches to help you play and symbols such as cats, cauldrons and potions. As well as a multitude of bonus features, the game also has a gamble feature option, which allows you to gamble every win on a card game. You need to say if the next card picked will be red, black, or a particular suit to win. You can carry on gambling for as long as you like.

The Witches Bonus is really the star of the show in this slot. If you collect three or more scatter symbols, which are illustrated by the witches themselves, you'll activate the bonus game.  The bonus game triggers 5 free spins in which three other features will be active. Each witch offers you three features to choose from, and you need to pick one from each witch.

As you can see, Witch Pickings offers players an almost limitless amount of combinations of bonus features. This means that each time the bonus round is triggered you can try out a different way to win. You can see all your old combinations on the ‘history' page, so you can also learn which combination has been most profitable, and which ones were a mistake.

Rainbow Riches: Reels of Gold only launched at GoWin this week, but it's already proving popular! Following on from the rest of the Rainbow Riches series, Reels of Gold serves up the luck of the Irish once again, yet with an innovative new design.

The slot features 10 reels and 100 paylines, which we know sounds a little strange at first. The weird amount of reels and paylines come from the Colossal Reels feature, which you may have seen in other NYX slots. The Colossal Reels feature is, essentially, a second grid of 5×12 which is played alongside the regular 5×4 grid. The reels spin together, which is what creates all those paylines!

Aside from an unusual reel layout, Reels of Gold is also packed with great bonus features – it wouldn't be on this list otherwise now would it? Look out for the magical fairy, who can grace your reels at any point, offering 7 mini features.