Although Manchester United are one of the favourite teams to take the title, we'd advise you to go against the bookies. This is because there are numerous factors which could leave Manchester United in hot water this season, and numerous questions to be answered! These include:

Essentially, the answer to all these questions is no. That's why if you asked us, in our expert opinion, whether or not you should you bet on Manchester United's Premier League odds 2018, we'd say no. Read on to find out about each of these factors, as well as where you can find the best Manchester United odds should you wish to disagree with us!

DISAGREE WITH US? PLACE A BET ON MANCHESTER UNITED HERE AND LET US KNOW HOW IT FEELS TO THROW YOUR MONEY AWAY

Here's Why Manchester United Will Not Win The Premier League

So, to prove to you that we know what we are talking about, we have compiled a set of indisputable reasons as to why Manchester United don't have the credentials to win the Premier League title.

Will Mourinho Stay at Manchester United This Season?

There have been rumours circulating about Jose Mourinho at Old Trafford throughout pre-season. The Portuguese manager has looked disinterested, displeased and as if he would rather be elsewhere.

The atmosphere around the club cannot have been helped by Mourinho’s antics and one can only assume that this will impact the Red Devils’ mindset and enthusiasm.
It remains to be seen whether Mourinho will remain in Manchester, but all this uncertainty does not bode well for Manchester United’s Premier League odds.

Can Manchester United Keep Hold of Their Star Players? 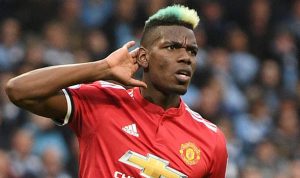 It is no secret that Mourinho has a few frosty relationships at the club. Paul Pogba looked outstanding at the 2018 World Cup for France and yet at Old Trafford, he has rarely replicated those kinds of performances. Pogba has also been heavily linked with a move to Barcelona, which could still happen as the Spanish transfer window doesn't close until the end of August.

In addition, Luke Shaw has been largely ignored by Mourinho during his time at the club, despite his undoubted ability. Anthony Martial is another player who has been far from pleased at Old Trafford.

With unhappy players at the club, team spirit is unlikely to be high, which is a significant problem when a club is striving to muster a serious Premier League challenge. This is why, although Manchester United's Premier League odds look good right now, we predict that they will widen in the near future.

Do Manchester United Have Enough Strikers to Score Goals?

The simple fact is that Manchester United do not have many strikers at the club. Romelu Lukaku is the only true centre-forward at the club, leaving the question of where all the goals are going to come from.

Alexis Sanchez and Marcus Rashford generally operate as forwards rather than strikers and whilst they are capable of scoring goals, they cannot be relied upon to deliver routinely.

If Romelu Lukaku gets suffers a serious injury, this could be a huge problem for Manchester Utd and impact Premier League odds.

Manchester United have made very few additions to their squad and that is where a lot of Mourinho’s frustrations have stemmed from. The only significant signing they made was the addition of central midfielder Fred from Shakhthar Donetsk.

Mourinho was keen to sign another central defender and forward but wasn’t able to bring in either. This is why you shouldn't consider Manchester United's current enticing Premier League odds.

Look, whilst we could go on and on about the fact that United are lacking a strong defence, a powerful set of forwards and a manager who knows what he's doing, the fact is that all these factors simply add up to the fact that Manchester United are a bit crap.

Don't believe us? Check out they're winning history (or lack thereof):

What's more, other teams are catching up with Manchester United. Whilst Manchester City are still favourites to win the league this year, teams such as Liverpool, who are looking stronger than ever, are now being considered more likely contenders for the top spot than Manchester United. This bumps Manchester United's odds significantly, as you can see in the table below.

Whether you've decided to stick to your guns and still want to back Manchester United this season or you're now looking for a new team to bet on, why not check out one of the sports betting sites below?

All three of these sports betting sites offer competitive Premier league odds, as well as rewarding bonuses, mobile compatibility and a range of accepted depositing methods

ComeOn is one of our favourite UK sportsbooks and this is because it offers players a wide variety of betting opportunities, as well as some very rewarding bonuses. Launched in 2008, ComeOn is definitely one of the top sites to place your Premier League odds bets at this season, so why not check out what makes it so great in the table below.

Guts is one of the UK's most popular casino brands, and the good news is that they boast their very own integrated sportsbook too. This is filled with hundreds of sports betting options, including Premier League markets. What's more, Guts offers in-play betting, which allows you to get closer to the action!

MobileBet is an internationally renowned sports betting site which provides punters with a wealth of market. From sports to football (including the Premier League), Mobile Bet has it all. What's more, as the site's name suggests, Mobile Bet runs flawlessly across all devices. Perfect for betting on the go!

What Do You Think?

Whether you're an avid Manchester United fan or committed to a rival team, we'd love to hear from you! Tell us how you think Manchester United will perform this season and whether or not you're finding their current Premier League odds to be appealing. Comment below with your opinion or with any questions for our Premier League betting experts, and we'll get straight back to you!

How To Self-Exclude From All Gambling Sites