Editorial: Why Guns N Roses Of NetEnt Won Game of the Year

NetEnt have always been one of the best software developers around and they've got the goods to prove it. Their games are constantly some of the most popular online slots around.

So, it comes as no surprise that EGR Operator Awards recognised them again. This time, they took home the most coveted award – Game of the Year.

The award celebrated their recently released Guns N Roses slot, which was the second installment in the NetEnt Rocks trilogy. It's a well deserved achievement as the game is a spectacular feat in both design and performance.

Yet what makes this game stand out from the crowd so much?

The Game of The Year Competition

The EGR Operator Awards is one of the highlights of the year for software developers and online casinos. The prestigious competition celebrates those in the industry that strive for innovation and quality in the gaming sector.

The Game of the Year award is arguably the biggest accolade to receive.

A dozen slots were nominated, so Net Entertainment had some tough competition.

Guns N' Roses' success, however, comes as no surprise. The slot is one of the brand's most popular games ever. As such, it's a perfect example of the team's commitment to producing unique and exciting titles.

You can never fully predict, which slots will engage players and prove to be fan favourites. Sometimes, producing a game packed full of mini-games and experimental ideas isn't enough. Once it goes to market, such a game can instantly flop.

1. The Creators Knows Their Customer

NetEnt, however, are very good at understanding their player base. So, they seem to have created a winning formula accordingly. Their success can be seen in the likes of Starburst, the slot that remains incredibly popular after many years.

Like many of NetEnt's slots, Guns N' Roses was a highly anticipated release. It was the second slot in the brand's NetEnt Rocks series. It already included the spectacular Jimi Hendrix slot.

The trilogy of slots, which was completed with their Motorhead game, was designed for a specific reason. It was made to celebrate 20 years of innovation from the brand.

Hence, they invested heavily in creating brand new technical features. At the same time, they wanted to make sure the slot was a tribute to the band.

So, what makes Guns N’ Roses such a great game? How does it offer players something new and different?

The Swedes responsible for this release are among the best software designers around. This is especially true when it comes to packing their games full of exciting free bonuses and great animations.

Guns N' Roses is no exception. The team put great effort into making sure its free games were both lucrative and visually stunning. Its bonuses includes:

How They Look In-Game

You can see a number of these special rounds in action in the official video for the release:

Alongside bonus symbols such as regular and expanding wilds, the game includes six other bonus features. The Wheel feature and the Crowd Pleaser Bonus Game are types of extras we've seen before. So, they're simple but effective in boosting bankroll.

Similarly the Encore Free Spins feature is pretty standard. Whilst the Solo Multiplier offers up to 10x your wager, it's nothing too special.

The Legend Spins feature awards a combination of stacked wilds and re-spins. They can keep you going for quite some time, but again, it's nothing too different.

That means then, that the innovation of the game lies in the Appetite for Destruction wild symbol. This is effectively a massive cross shaped stacked wild.

It appears as an overlay on the reels and creates many chances at finding a winning combination. Visually, it's certainly impressive. Featuring the band's members in skull form and dominating the board, it brings a real sense of occasion to the game.

The Branding of the Game

The whole of the Rocks trilogy impresses with how much thought and commitment have been put into it. They make sure that the slots will capture the spirit of the musical artists they're representing.

Unsurprisingly, the team have admitted that:

Creating Guns N’ Roses was their “most ambitious project to date”.

A lot of that lay in making sure every single graphic, animation and sound fitted perfectly with the theme.

Choose Your Own Music 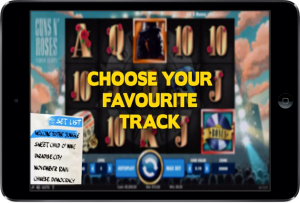 Speaking of sound, one of the stand out aspects of Guns N’ Roses has to be the music.

The developers committed to include some of Guns N’ Roses greatest hits. Moreover, they also offered players the option to select whichever song they wanted as their background music.

Having a personal jukebox in a slot game is something that is both unexpected and amazing. Most slot designers seem to pick their games' soundtracks as an afterthought. Thus, they have you reaching for the mute button in minutes.

The creators, on the other hand, have committed themselves into making the soundtrack a feature in it's own right. Naturally, it seems to have paid off with fans. The classic songs prove to be incredibly motivating when spinning, the rock and roll attitude spurring you on to play.

Overall, simply consider the immense amount of planning, care and dedication that went into the game. If you do, it'll be no surprise that Guns N’ Roses has won the Game of the Year award.

So, we must say a massive congratulations to everyone in the team at NetEnt studio.

Luckily for you, you can play this world-class game right here, right now at GoWin. So, why not check it out and see what all the fuss is about?