If you've read slot guides and reviews, then you've probably come across RTP – a popular acronym in the gambling world. In a nutshell, the RTP rate is the number of total wins divided by the total stakes wagered.

Read More
This is represented as a percentage, but if you don't fully understand what the numbers mean, then today's your lucky day. Of course, if this is a new concept to you, you're in safe hands too! RTP is theoretical, meaning that the percentage is calculated over an extended period of play and doesn't represent what happens each time the game is played.
Whilst the RTP won't predict what will happen in the short term, it does predict long term results of the game. Plus, knowing the RTP can help you you to gamble responsibly as they can help you budget effectively.

A good mobile slot should generally have a rate of around 95% or above. Any slot under this amount is probably just a money grabber. Anything above 97% we'd class as high RTP.

Below you can find a list of some of the best slot games. The list includes Microgaming and NetEnt titles, as well as titles from other software developers at the best Casinos.

READ MORE if you want to learn more about the titles mentioned in this list.

What is RTP in slots?

RTP rate is, essentially, the percentage of total wins divided by the total stakes wagered. However, it's theoretical. This means that the percentage is calculated over an extended period of play and doesn't represent what happens each

time the game is played. As you see in the image with Bloodsuckers it's very simplified but in theory it would look like this. The RTP rates varies heavily and you can lose out 25 spins in row and then suddenly win 100 times your stake. This doesn't mean that the RTP Slot rate for that game is 175%. 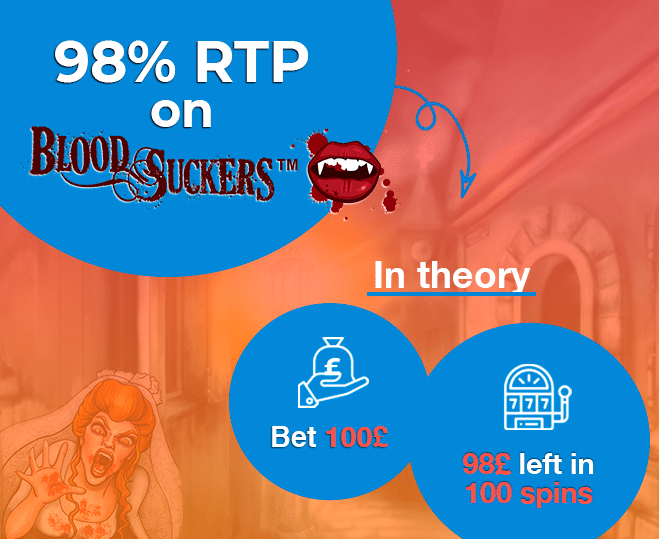 Slot Machines are built in different ways and Blood Suckers with low volatility can be played with a low stake and played for a long time. In Mega Joker you can spin several spins without winning but once you hit you can win really big. The higher RTP though the more likely you are to profit from slots.

Below you can find a list of some of the best slot games. The list includes Microgaming, Netent, Thunderkick and many more high RTP slot machines. They are not only the highest RTP Slots but also  some of the most funniest Slot Machines from the biggest slot providers.

This is one of the highest RTP slots around. Boasting a record RTP rate of 99% and a high variance, this slot has become a cult classic. Whilst Mega Joker is by no means the most beautiful NetEnt slot around, it’s perfect for high rollers who have the bankroll to weather a dry spell and wait for the big wins.

As the name suggests, this is a pirate themed game. It comes complete with a free spins round, expanding wild symbols and a generous RTP of 98.6%. Don’t let the beautiful graphics of this slot fool you, 1429 Uncharted Seas is serious gaming at its best.

Like many NetEnt slots, Bloodsuckers has earned a reputation for itself. Not only is it fantastically gothic, but it offers a huge RTP rate of 98% and a low variance. Players can win up to 900x their stake in the free spins feature too, making this game definitely rewarding. With its spooky exterior and amazing bonus features, Bloodsuckers may just be the chilling slot you’ve been looking for.

It may not be one of the most well-known slots around, but it’s still definitely worth playing. Created by Push Gaming, this slot comes complete with a bee theme, 20 paylines, sticky wilds and free spins. The slot also boasts a handsome RTP of 97% and chances to win up to 600x your stake on every spin.

Created all the way back in 2013, Playboy by Microgaming pays homage to Hugh Heffner’s magazine of the same name. On the reels, players can expect scantily clad women, beach sunsets and fast cars – all the things Hugh would have wanted to be associated with. Whilst Playboy (the magazine) has fallen out of favour in recent years, this slot remains incredibly popular due to it’s high RTP rate of 96.57%.

It is one of those games which you may have noticed at casinos before, but never thought to really play. This may be because it boasts quite a timid theme (based around the three little pigs), but don’t let that put you off. Under the bonnet, Big Bad Wolf is anything but childish, with an RTP of 97.34% and a high variance.

This is a high variance video slot, with a generous RTP of up to 98% to match. Set in a fairground, the game promises all the fun of the carnival with max wins of up to £12,000 available on every spin. The slot also boasts a special game mode, which can award players with mystery prizes worth between 20 and 6.000 coins.

This unique slot is brought to us by Betsoft. Players can enjoy two different game modes (Good or Bad), each with their own variance level. So, for instance, play in Good mode to receive smaller, more frequent wins, or try your luck in Bad mode which really cranks up the volatility of the game. With an RTP of 97.79% and some very innovative features, it’s easy to see why Good Girl, Bad Girl is a player favourite.

One of the classics in NetEnt got a follow up – And it's even better. NetEnts Jack Hammer 2 got a high RTP rate at 97.1%. It's one of the most played Slot Games at NetEnt and considered by many as the best Slot.

This is the slot machine. Known by everyone – loved by everyone, despite it doesn't got the highest RTP, players can't get enough. Starburst got RTP rate at 96.09%, with a low volatility and frequently paying big wins. We understand why this game become everyones favourite slot.

Is A High Payout Percentage Always A Good Thing?

It would seem fairly obvious that as a player, you should always choose a slot with a decent RTP and a low house advantage. However, this isn't always the case as sometimes players need to consider the slot's volatility (or variance) too.

In high volatility slots, the bets are being stored up by the slot to contribute to bigger and less frequent wins. There is no way of knowing if you'll receive the money or someone else will. This considered, it's generally OK for these titles to have an RTP of around 94%, but some can go as low as 92%.

On the other hand, low variance slots often boast the biggest RTP percentages. However, as you can probably guess by now, better stakes also mean lower payouts. Low volatility games pay out frequently, which makes them perfect for casual gamers or those who want their budget to last longer.

The percentage rates of these titles are higher as they're not pooling the money so intensely. Using the same example as earlier, this means that it's less likely that your money will go to someone else's pocket.

Progressive jackpots are a whole different beast. While they usually belong to the high volatility class, they also offer jackpots that significantly lower the game’s RTP. So, is there a way to win at slots with such jackpots aside from actually hitting the grand prize?

We’d say yes, but your chances are better on other games. Progressive jackpot titles are aimed at players who risk whatever to win it all. If you want to learn how to play slots and win often, therefore, progressive jackpots aren’t the greatest pick, because you’ll either win once or not win much at all.

RTP rates must be easily accessible – it’s a rule. In accordance with the United Kingdom Gambling Commission's ‘Remote Gambling and Software Technical Standards' regulations, each online game must display:

This is to ensure the player can make an informed decision about his/her chances of winning, before deciding to gamble.

⚠️ This being said, an exhaustive RTP list is still quite hard to come by.

You can find all of the titles listed above at some of the UK's biggest and best mobile sites such as GoWin, Casumo and Power Spins. If you're looking to maximise your winnings, these are all good places to start.

Always remember, however, to gamble responsibly and to read terms and conditions carefully.

Best Slots with a Wild West Theme at GoWin Casino