GoWin Guide To LG Pay – What We Know So Far

First we had Apple Pay and Android Pay to serve the users off specific operating systems, then Samsung Pay got on the scene to offer a bespoke payment solution for all its branded devices. Now another smartphone manufacturer has got on the bandwagon and announced the release date of its new payment solution.

The company is LG and the product is called – imaginatively enough – LG Pay. Launching on LG devices in June, LG Pay will mimic the likes of Samsung Pay and Apple Pay by acting both as an online e-wallet and a land-based contactless payment method.

The specifics of what LG Pay will look like and how it will work are still under wraps, but there’s enough rumours swirling round, and cheeky bits of evidence leaked, that we’re starting to build a better idea of what to expect from the payment product when it launches later in the year.

So far there are three main functions we know about that will most likely be included in the final product, so we thought we’d run through those here.

This is the aspect of LG Pay that online and mobile casino players should really be paying attention to, as this is the side of LG Pay which will be useful if you want to make a deposit using the system. Fundamentally, the idea of the e-wallet aspect of LG Pay is that you can store credit and debit card information (and possibly also bank account information) in your LG account through an app on your device. You’ll then be able to surf the internet on your device, and make payments through the app with participating vendors.

This means LG Pay will function much like the other e-wallet deposit methods we all know and love, like PayPal or Neteller, and will allow you to make deposits and withdrawals in much the same way.

Unlike traditional e-wallets, however, LG Pay will be linked to your smartphone in a unique way, and will offer additional features which we’ll discuss below.

If you’ve ever used a contactless credit or debit card, or used something like an Oyster card when travelling, you’ll have made use of near-field communication (or NFC), which is the system that makes contactless payments possible.

It just so happens that most modern smartphones are also equipped with NFC, opening the possibility for them to be used in much the same way as contactless cards, given the right applications.

It’s presumed that the LG Pay app on your LG device will make use of NFC technology, and make it possible for it to be used in stores or for contactless travel in much the same way as a contactless card. You’ll just need to select the payment option you want to use with the NFC service in the app, and you’ll be able to use it right away. 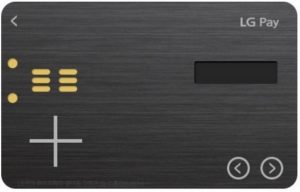 The final feature of LG Pay which has been leaked to the public is the one that really sets it apart from the likes of Apple Pay, Android Pay and Samsung Pay: the white card. What the white card is, is basically a blank smart credit card which is connected to the LG Pay app on your phone.

You’ll be able to cycle through the various payment options on the app and choose which you want to use in conjunction with the white card.

This all effectively means that you can link the white card to any bank account or credit or debit card, making it into a multi-purpose pay card which you can even use in ATM cash machines – something none of the other big mobile payment solutions allows. Instead of a full wallet, all you’ll need to carry is your phone and your LG Pay white card.