To us, music and slot games go hand in hand. They're both a form of expression, relaxation and, most importantly, entertainment.

It's fitting then, that many of the world's best slot games have drawn upon music as a source of inspiration. From slots which capture the mood of a musical era, to branded titles which feature legendary musicians.

In today's blog post, we're looking at our favourite music-themed slots. All of the titles listed here not only use music as their inspiration, but also boast impressive and innovative features and graphics. As such, they're games you don't want to miss out on – even if you don't consider yourself to be a music maniac. 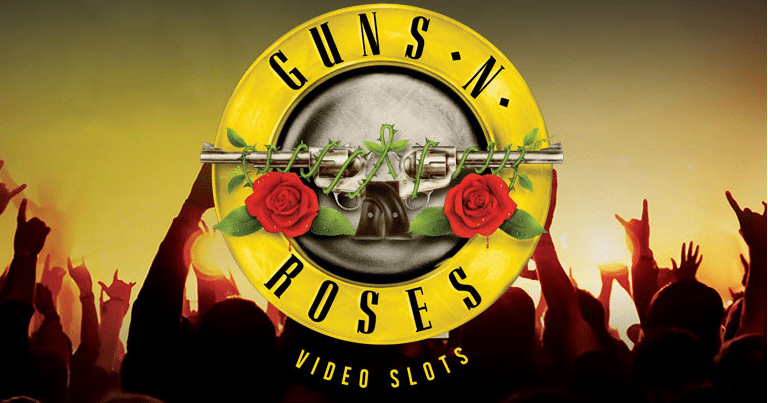 In 2016, NetEnt decided that to celebrate 20 years of innovation from the brand, they would be releasing a trilogy of slots, based around classic rock musicians. The trilogy would be called ‘NetEnt Rocks' and it all kicked off with the fantastic Guns N' Roses slot.

Since it's release two years ago, Guns N' Roses has been one of NetEnts most popular titles. This is because the game combines fantastic branded graphics with a whole host of amazing bonus features. Players can benefit from wild substitutions, expanding wilds, stacked wilds, wild overlays, free spins, multipliers and a very entertaining pick and click bonus game too.

As if that wasn't enough to keep you entertained, the Guns N' Roses slot also comes with a soundtrack which allows players to pick from 5 of the band's biggest hits. It really is an impressive slot and we'd recommend it giving it a go whether you're a fan of the rock band or not. 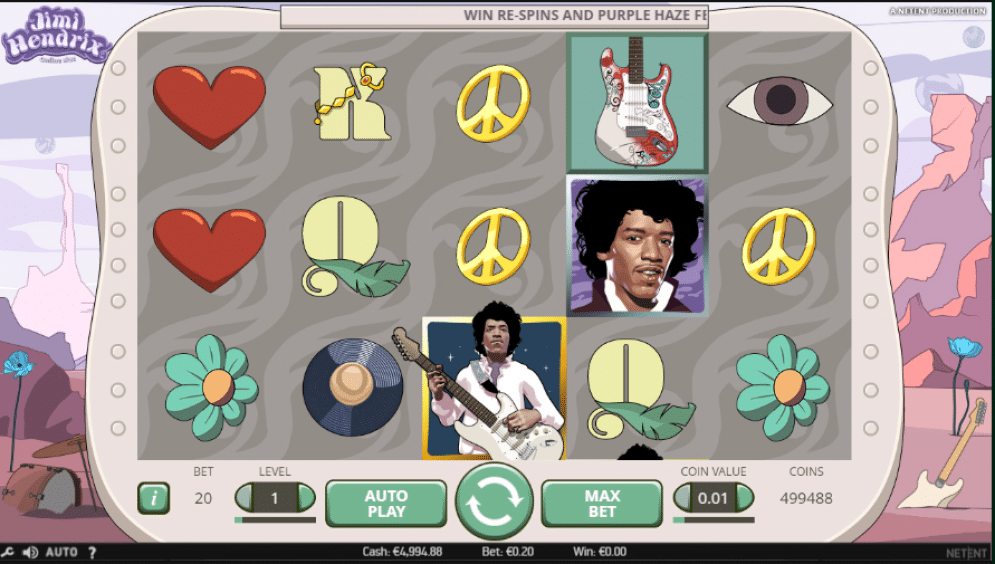 Following on from Guns N' Roses, NetEnt released Jimi Hendrix. This slot, as its name suggests, is based around the guitar legend and transports players back the 60's when the man was in his prime.

Jimi Hendrix comes complete with a psychedelic theme, which includes a purple design and many groovy symbols. Players can expect peace signs, flowers and hearts upon the reels, as well as illustrations of Hendrix himself.

Furthermore, players can enjoy plenty of unique bonus features, such as wild substitutions, re-spins and a pick and click bonus game where they can win free spins or instant cash prizes. Fittingly, the soundtrack to the slot also boasts many of Hendrix's most famous songs. Turn up your speakers and spin to the likes of Crosstown Traffic and Little Wing now. 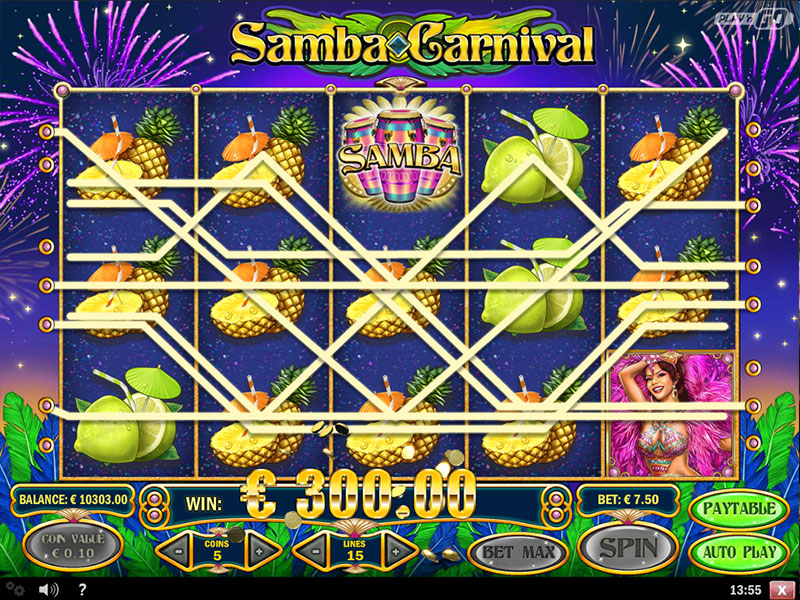 Taking a break from rock and roll for just a second, we'd like to transport you to the streets of Rio, where the city's annual street party is taking place. Samba Carnival is a beautiful slot by Play'N Go, which manages to capture the lively, exciting atmosphere of Brazil's top carnival.

With a theme like this, players can expect an explosion of colour and sound. Symbols on the reels include drums, dancers, cocktails and maracas – all of which appear on a background festooned with fireworks. Players can also cash-in on wild multipliers or win up to 150x their state with the Bongo Bonus feature.

With a soundtrack of drums, whistles and horns, we've no doubt that you'll be shimmying in your seat as you spin too. It's the perfect slot to try out for some feel-good fun, which is why we'd recommend it to everyone.

4. The Phantom's Curse by NetEnt The Phantom's Curse is part of NetEnt's Universal Monsters range of games, which also includes the likes of Dracula and The Invisible Man. However, although this slot was supposed to be a spooky release, we think it succeeds in paying homage to its musical roots too.

As the name suggests, The Phantom's Curse is based around the musical, the Phantom of the Opera. As such, symbols on the reels include roses, rings, Christine (the victim of the Phantom's affections) and the Phantom himself, Erik.

This game also includes a plethora of bonus features, which are both innovative and lucrative. There are stacked wilds, multipliers, free spins all up for grabs, as well as a pick and click bonus which can reward you with 360x your wager.

The Phantom's Curse isn't reserved for musical fans but those who do love the original play should turn their speakers up and really immerse themselves in this spooky, yet impressive, mobile slot. We're back to the final installment of the NetEnt Rocks trilogy now, which celebrates one of the best rock bands of all time – Motörhead, of course. This game, like the other two in the series, boasts branded graphics and music as well as an array of unique bonus features.

Players of the Motörhead slot will benefit from 76 paylines, as well as free spins, wild substitutions, a mystery reel feature and a Bomber bonus feature that adds clusters of mystery symbols to the reels to enhance wins.

In our eyes, the only way to play the Motörhead slot is with your speakers turned up to loud. The slot perfectly represents the famously rule-breaking band and who wouldn't want to hear (and sing along to) hits such as the Ace of Spades as they spin the reels? 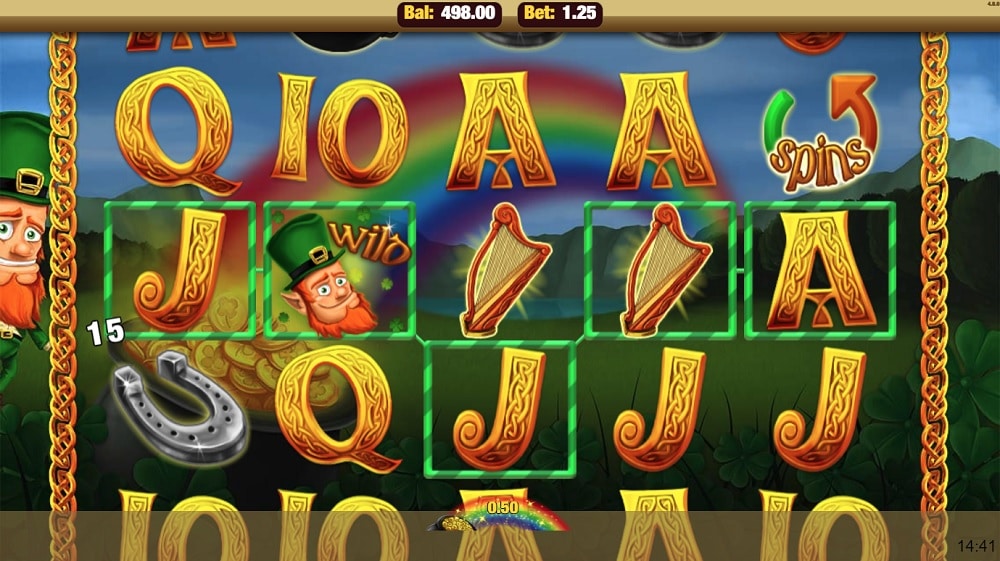 Whilst music themed slots may be ever-popular at online casinos, there is one theme which still reigns supreme – Irish themed slots of course. But what if you could combine the two themes to create something even more entertaining? Nektan delivers just that in their well-loved slot, Shamrock N Roll.

On the surface, Shamrock N Roll looks like any other Irish slot. The reels hang against a vivid green background, and symbols include four-leafed clovers, harps, lucky horseshoes and pots of gold. However, once players dig a little deeper they'll soon realise they're in for a treat.

Shamrock N Roll comes complete with wild symbols and free spins, both of which help players to win big and continuing spinning for longer. Moreover, the slot comes with a rousing Irish folk music soundtrack which is certain to get you in the mood. If electronic music is much more your thing than rock music, then why not try out DJ Wild by Elk Studios? Not only does this slot feature a soundtrack produced by one of the hottest Swedish DJs (which is also downloadable on Spotify), but it also comes complete with amazing graphics and bonus features.

All of the animations in this game are synced to the beat of the soundtrack through a DMX light controller. This means that when the action in the game steps up, so does the mix you're playing to.

All in all, Elk Studios have clearly committed to the theme of this game and we're very happy they did. DJ Wild is the perfect alternative for those players who would rather listen to techno/house sounds as they spin than the rock and roll offerings from the likes of NetEnt.