Casinos have always been a favourite location to set a movie. Whether it's crime, drama or comedy you want, casinos have enough emotions running high to suit any genre.

Since they're the perfect host for almost any tone and style of film, many films take place in a casino. But what are the best of best when it comes to casino and gambling movies?

Check out our guide to the best gambling movies below, complete with what awards they would win if they took part in the GoWin Academy Awards.

Our top 5 gambling movies may vary from many others. However, we've tracked down what we think are the best flicks to get yourself in the mood for gambling.

So sit back and enjoy our picks. Maybe you'll find your next favourite film somewhere in our top 5?

If not, here are some honourable mentions of great gambling movies that didn’t make it to the list: 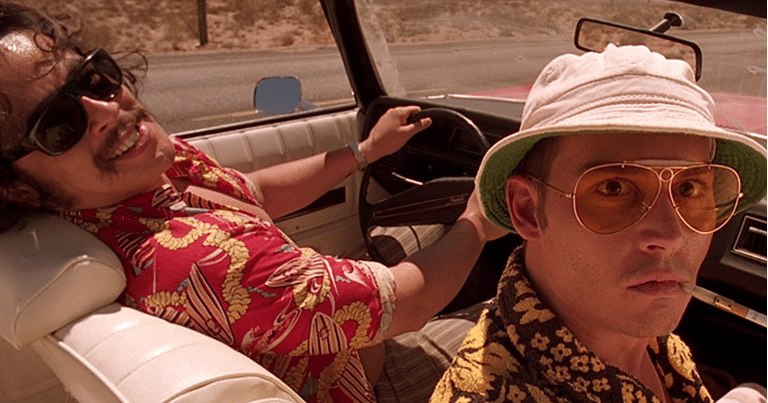 This film is based on the book of the same name. It’s been written by the famed gonzo journalist Hunter S Thompson.

The book includes his questionable accounts as he journeys to Vegas with his lawyer. His aim is to cover the annual Mint 400 motorcycle race.

As their drug intake increases, plans to cover the Mint 400 quickly go out of the window. What we're left with is an insane adventure around Vegas.

There, Thompson comes into contact with violence, crime and even lizard men from another world.

One of the Best Comedies

Thompson is played brilliantly by Johnny Depp. The actor gives one of his most manic performances ever. The whole drug-fueled style is conveyed perfectly by the writing and directing of Terry Gilliam, of Monty Python fame.

Are you're looking for a comedy about Vegas? This one will have you laughing and horrified at the same time, and is the perfect casino movie for you.

?️ Check it out on IMDb. 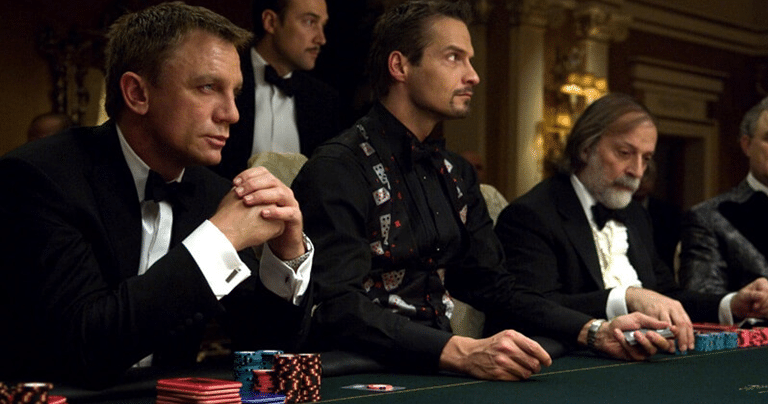 Many would argue that the last few Brosnan Bond films had started to lose their way. However, Casino Royale was the film that brought James Bond back from the grave.

And what better way to do that, than to strip away all the ridiculous parts? There are no gadgets, foolish action scenes or campy bad guys who had been previously clogging up the series.

With all the fluff removed, the battleground was now the mental battle between Bond and the antagonist Le Chiffre. Instead of using guns, they attempt to bluff one another out of $150 million.

The Best of Psychologically Intense Movies

We've always loved the intensity that a poker game can bring out of people and this movie shows it. It's an action film that replaces guns and explosions with a pack of cards. The result is outstanding.

So, Casino Royale is one of the few films we've ever seen which really captures the poker drama.

?️ Read the reviews at Metacritic. 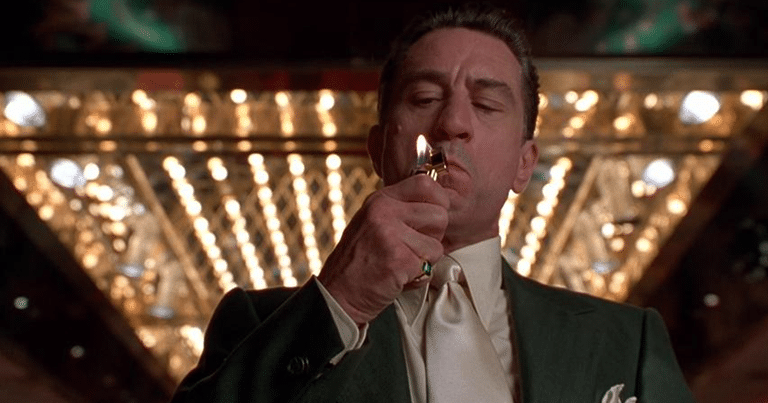 It wouldn't be a list celebrating best gambling movies without Martin Scorsese's epic crime drama. It depicts greed, corruption and violence in Las Vegas during the 70s and 80s.

Okay, so it's probably not the poster child that Vegas casinos would want of their industry. However, it's no less the very definition of a cinematic experience.

Warning: it's not for the faint of heart, running for over 3 hours. Regardless, those who put in the time will be rewarded with a truly standout film.

What Is It About?

In short, Casino charts the rise and fall of two gangsters. Sam ‘Ace' Rothstein is played by Robert De Niro and Nicky Santoro – by Joe Pesci.

Sam is sent to Vegas to oversee the day to day dealings of the mob owned Tangiers Casino. His job is to make sure its earnings go to the right people.

Nicky, a mobster enforcer, is assigned to protect Sam and their business interests in Vegas. However, due to his volatile behaviour, he starts causing trouble for both himself and Sam.

The entire film charts the darker side of Las Vegas' allure. It explores the last days of the mob's reign in Vegas. 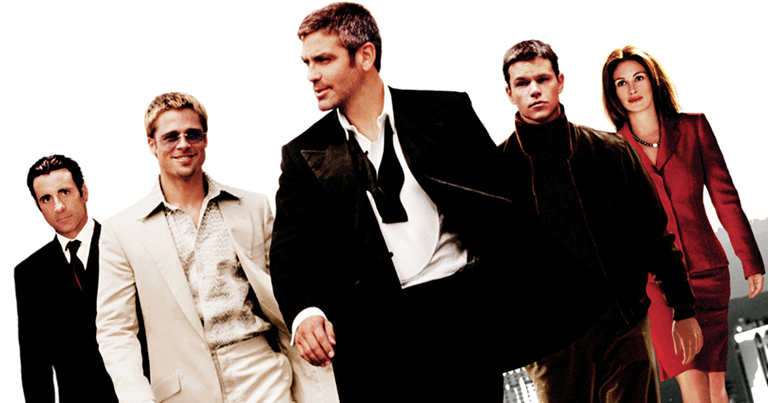 Everyone loves a good heist film and there's no better place to set it than Vegas. Regardless, a heist movie will live and die on the quality of its characters.

Unfortunately, most films struggle to craft even one good character. Let alone a group big enough to pull off a heist on a Vegas casino.

That's why Ocean's 11 is such a surprise among casino movies. It manages to bring us a killer cast of characters, each one with their own personality and part to play.

Why You Should Watch It

The head of the team is Daniel Ocean himself (played by George Clooney). He’s planning on robbing the Bellagio hotel and casino. It just happens to be owned by his ex-girlfriend's new husband.

It's a gripping tale of crime and revenge. Though, at the same time, it’s carried by an amazing cast of characters. Played by the likes of Brad Pitt and Matt Damon, they’re absolutely hilarious when thrown together.

Are hard-hitting crime epics like Casino too much for you? Then the much more light-hearted Ocean’s Eleven is the perfect antidote for you. 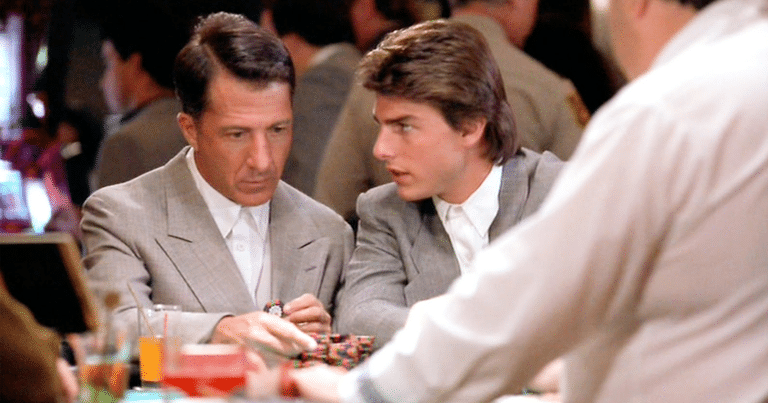 Okay, arguably only about a quarter of the film takes place anywhere near a casino. However, the card counting scenes in Rain Man are some of the most iconic moments ever put to film.

Even people who haven't seen the film will still recognise some scenes. Just think of the Babbitt brothers descending the escalator in their matching silver suits.

The Plot of the Movie

Rain Man is a road trip movie with a twist. Raymond Babbitt is a business owner on the edge of bankruptcy awaiting an inheritance from his father. However, he finds out he's receiving nothing.

Instead, all the money is going to a brother he never knew he had. So, he's completely taken back. Raymond finds his long lost brother, Charlie, discovering he is autistic and has been living in a facility for his entire life.

In order to blackmail the courts for his inheritance, Raymond kidnaps Charlie and takes him back home with him. Along the way, they begin to bond and learn about one another.

The most notable of all is Charlie's incredible ability to count cards. This leads to a brilliant sequence in Vegas. There, the brothers try to win cash and get out of their financial problems.

So, Rain Man is a casino movie that avoids the crime drama angle. Instead, it approaches the gambler city with a heart.

How To Self-Exclude From All Gambling Sites